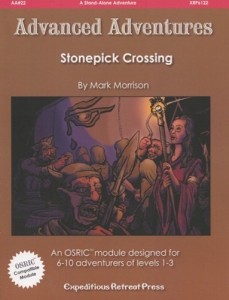 The tiny town of Stonepick Crossing sits on top of an old dwarven dam holding built some 500 years ago to end a long war. Recognizing the futility of direct assault, the dwarves built the dam to flood the goblin caves, flushing the foul creatures out of their caves and into the slaughter of honest combat. Now 500 years later, the dwarves have moved on and a small thorp has sprung up. Mystery surrounds the protected town and rumors abound: locals disappearing in the middle of the night, strange noises from underneath the dam and even rumors of a monster in the lake percolate through the community. Which rumors are true and which are the ale-addled ramblings of old men fearful of their own shadows?

A village supplement! And a High Fantasy village at that! Zzzz…..

Stonepick Crossing is a small village located atop an old dwarven dam. 53 rooms are detailed within the village and another twenty or so are located underneath the dam in two old mini-dungeons. The idea here is that this is a sort of home base village, with the usual intrigues, and a couple of subplots can lead to the the two mini-dungeons located in the dam, each of which has about seven rooms.

The village is the sort of multicultural wonderland that I loathe. Halflings, humans, dwarves, gnomes and elves all living in harmony together. And they all have precious names also! Susie Honeyblosso, April the Wise, Dirk Nightblade and the like. *BARF* The village is also quite small for the community it supports. There’s a thieves guild market with four different stalls in it, including forgeries, poisons, weapons, etc. That seems a bit of a reach for a village built on top of a dam with 53 rooms in it. The watch is on the take, there’s a slaver stealing visitors AND residents off of the streets … gonna run out victims stealing two townspeople a week … Quite the exciting little place!

There’s a lot of people in the village who are not zero level. A LOT. Fourth level fighters, second level thieves, third level illusionists, fifth level clerics and so on. Going hand in hand with this is that the place is crawling with magic items. Magic swords, armor, potions, scrolls, wands and rings are all in much abundance. You will recall that there is a certain school of thought which believes that module B2, The Caves of Chaos, is generally played wrong. There is far more treasure in the keep than in the caves and smart players will loot the keep rather than the caves. Stonepick has the same problem. As a high fantasy village it should be relatively easy for the party to murder the various rosy-cheeked hobbit, humans, and others to loot their corpses and TREASURE BATH.

This is certainly meant to be a kind of home base for the party with the various antics in the village providing a kind of back-drop to their other adventures. It certainly does meet those minimal requirements but it’s lacking in a couple of areas I consider crucial for a village. First, the places are numbered in a strange way. The entire complex is numbered like a traditional dungeon. The numbering starts at one and continues to room number seventy deep in the areas below the dam. The smith is room one and the back room of the smithy is room 2. Room five is the leather store and room six is the back room of the leather store. This layout is strange for a village and doesn’t really help you find things. You’re going to have to annotate the map heavily to get it in to a usable form for the adventurers walking around town.

Secondly there are some strange decision made. A couple of houses are empty or abandoned. Some homes inexplicably get the names of their (mundane) occupants detailed and a couple of noted about them while others, more crucial to the village, get none of that detail. Some vendors have detailed, but short, lists of items for sale. The tailor has seven wool blankets for sale, in addition to four bedrolls, 2 sets of traveling clothes, 4 cloaks, and a blue silk coat. It’s like there’s several different village and town sizes all mashed up and mixed together. A handful of businesses. Most of them not supportable in the population listed. A bait shop and a black market with four stalls, but the only soft goods shop only have five different items for sale?! I strongly believe that the quality of a village/town/city is based on the social interactions between the occupants and that is very much missing from this village. Most of the people seem to live in isolated bubbles and at best provide a rumor about what they say X doing last night, where X is a bad guy. There are two exceptions to this. The wife of missing merchant has a bitter tongue and tells the characters she thinks her husband is off cavorting with a different townsperson, a woman. Secondly the jeweler is attacked by crabmen from a secret door when the party enters his store for the first time. That’s it for the townspeople interactions. Oh, the bait shop salesman(!) will tell you a tall tale, or the beggar man will tell you a couple of things, but neither are really related to village life. This needs a lot more of that to help make the village come to life. As it is the three subplots presented (slavers, hag/crabs, and corrupt town guard/thieves guild) are not really developed very well.