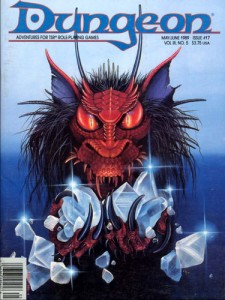 Next week I take up the fallen banned of Dungeon Reviews on RPG.NET, with issue #18. Expect the review to be a bit longer, as I elaborate more, and for me to be banned quickly for my strong opinions.
The Pit
Randel S. Doering
AD&D
Levels 3-5

This is a short 18-room ‘complex’ at the bottom of a pit. It’s inhabited by the remains of some evil cultists. The map has some interesting elements but it is essentially linear. Were it arranged differently it would probably serve much better. The entrance to the dungeon complex is through a pit and reminds me of the entrances of old. Rappan Athuk, Lich Dungeon, and many other older dungeons seemed to have some gimmick to get in to the dungeon or something similar around its entrance. This one has a nice pit with a hangman tree lurking about and some machinations at the bottom that belong in Grimtooth. After the entrance rooms (four or so) the things turns in to your typical Dungeon Magazine suckfest. The rooms are not very interesting and have A LOT of backstory embedded in to each one. The backstory is unneeded and detracts from the ability to run the room. There’s a temple room that, if edited down, might provide an interesting room in some other dungeon. The end boss fight is with a monster that gets progressively tougher to fight and can be defeated by a weapon found inside the complex. An entire page is given over to the description of an evil book that the party can’t use. The amount of useless detail provided is staggering, especially when compared to the amount of generic descriptions given the treasure, magic items (straight from the book) and in the descriptions of places and objects. Instead it fills us in on what the high priests second in commands assistant boot washer had for a snack two decades before any relevant events.

This is a wilderness adventure in an elf forest that’s been taken over. The party goes in only to find the magicks of the forest working against them and they find themselves being the hunted … by goblins. The wandering table has a nice little description for several of the monsters which I find adds a lot to the adventure. Ogres coming down from the mountains because the forest isn’t guarded, or ghouls sitting fat in the middle of clearing full of dead elf bodies. Some nice little details in those entries which help me build up an encounter around them. The same goes for some random agic items that can found. While the items are out of the book they to tend to be ‘better’ miscellaneous items, with some details about how they are found. That helps me build up an image of the scene in my mind which in turn helps me communicate that to the players. The attached 23 room dungeon is nicely laid out with lots of rubble piles and since its a monster lair there’s an order of battle presented that details who comes to reinforce when. I think thats a critical element thats usually missing from most adventures in intelligent lairs. The monsters seem a little under-powered …. until you reach the dungeon and then the forec of the place falls down upon you. The ‘hunting’ or ‘chasing’ aspect isn’t too well done, and its hard to believe given the small size of the goblin patrols. If you beef up that element and inserted a little more intelligence (the whole thing is being run by a mind flayer) then you’d have a nice little adventure. And it’s probably too much work to salvage.

Woo Hoo! OA! The OA adventures in Dungeon have generally been very good, delivering on the fairy tale vibe that I like so much. I think a lot of that comes from the talking animals, demons, and monsters who are all involved in some sort of bureaucracy or some such. They come off as much more real and the encounters are more interesting to run because of it. This one has the party traveling to a cave complex of an existential nihilistic cult. Not really evil, but more ‘were doomed to die, lets just wait for it’ sort of thing. Too much Cure and Sisters of Mercy, I guess. There’s a nice NPC monster group who want the party ot find one of their missing dudes, a brother, and another subplot about the last group to go on the quest. The NPC monster-brother who guides the party (potentially) also has some great parts. Once the tombs/caves proper are reached the thing falls apart a bit, with some predictably boring monster encounters and not enough ‘sample encounters’ to provide the detail/gentle idea push that I’m looking for in adventures. Oh, and it seems like every OA group adventures eventually involves some ancestors bones. If someone does an OSR version that should totally be worked in to it.

Out of the Ashes
Grant Boucher
AD&D
Levels 8-12

Flame is the red dragon from the first cover and major adventure in the first Dungeon Magazine, #1. This convoluted piece of shit adventure pulls out every dirty trick in the book to gimp the players, all to push its major conceit on them. The big Ah Ha! moment is at the end of the adventure, after everything is over, the red dragon shows up, the one the party killed in Dungeon #1, and does a surprise attack on the party. The contortions used to justify this are incredibly screwed up. The dragon, of course, had a ring of three wishes that just only had one wish left and it wished to be never die or be brought back to life or some such nonsense. Oh, and he’s set up some kind of stupid adventurer trap to get access to a giant diamond in a door he can’t open so he goes through all these contortions to summon adventurers to open it but he also wants to hide who he is so, of course, he has one of those fucking amulets of non-detection bullshit that, along with the “super evil area, -2 to turn attempts” should have NEVER made it in to any written product EVER. Yeah Gary, I’m calling you out! Oh, don’t forget that the giant fortress is actually some kind of testing grounds, etc, and that the walls can’t be passwall’d, etc, so the party HAS to do the adventure. This is all just stupid. The designer wants to run a low-level dungeon crawl for high level parties so he has to put in all this gimp shit to force things to happen the way he wants them to. Hey, here’s an idea … how about you earn the fucking money they paid you for this piece of shit and instead write a level-appropritae set of challenges? What? No? Instead you want to just have a room with a vampire, beholder, and Medusa in it? Ok, whatever. At times it tries hard, like with the Boris the Phase Spider encounter, and several of the traps are involved affairs, but the entire thing just seems like some kind of in-joke adventure, slightly less absurd than WG9. Oh, and did I mention that the kobold tribe is all suicidal, as another way to gimp the party? L A M E.