V2 – Palace of the Vampire Queen 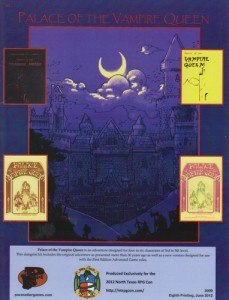 Holy crap! It’s the Palace of theVampire Queen! Yes, THE Palace of the Vampire Queen! The very first module ever published! (Nah, Frog don’t count.) Wowsers! This version is listed as the eighth print. It contains a forward from the original author, Peter Kerestan, as well as from Bill Barsh, the publisher/augmenter in this printing. This version has all five levels of maps but it also has two keys for each level. Included are the original keys from the earlier publications and also a set of re-imagined keys from Bill Barsh. He updates most of the encounters, attempts to scale things better than the original module did, and provide slightly more logic than the original.

There’s a single page of introduction that lays out the background: There’s a Vampire Queen! She lives in a palace! She’s taken the kings daughter! It’s laid out with some much more interesting flavor text that paints quite the mythic scene. It’s the barest of pretexts and it’s AWESOME! Jeff ‘Padasha Emporer of D&D’ Rients posted it on his blog. Check it out! http://jrients.blogspot.com/2007/02/fragments-from-palace-of-vampire-queen.html

Pretty bad ass! The rest of the pre-module text is really just a map key, a marketing blurb and like four sentences of advice. “Do your own wandering monsters” “DM, use your imagination to add extra detail” and “Read the module ahead of time”. Wooooo doggies! Why can’t all modules be this great? The five levels of maps are great also, especially level one. It’s one of those ‘fill the who page’ maps with something like 50 rooms on it. Lots of hallways, lottsof rooms, lots of doors and secret doors. There’s really only two things on the first level map that betrays its age. First, there’s a certain maze quality to one section in particular. I noticed this in Lich Dungeon also; there seemed to be a trend to have a certain maze layout in sections of the map. A spiral section of corridor that goes nowhere, for example. Second, the map is A W E S O M E!!!! Too many modern ‘dungeons’ have a linear map or just a hallway with a couple of rooms branching off of it. This doesn’t support explorative play in any way. The unknown is known, there no possibility of something coming from down that unexplored hallway. No ambushing and getting ambushed, or sneaking around. Level two through five All have complex maps as well but they seem a little more forced than level one. More like someone drew geometric shapes and then filled it in with rooms. Still, it gets the job done.

How ’bout them encounters, eh? SWEET ass encounters! I have to start making some distinctions here between the glorious mess in the original module and the refinements that Barsh has put on things. The Original keys take up two pages per level. For those of you counting that’s THREE pages per level total: one for the map and two for the keys. The keys come in chart form; one room per line, three columns per line. Monsters name, hits to kill in the middle, and a couple of notes about the room in the third column. Quite a bit of the dungeon rooms are empty. About 32 have no monster and about the same number have no contents for the room. But O M G when there are contents they are bizarre. “15 house cats” or “10 house cats and 1 madman” or 1 wounded warrior, CG.” The monsters combine with the notes “Madman will not fight. Cats will attack if madman is attacked. If left alone he will tell of secret door from level 3 to 4” or “Warrior is prisoner. If asked will warn of rust monster in room 8. If healed will join party.” That is some terse ass writing right there. in the one-page dungeon style. And it woks as well here as it does in the one-pages. A room description just needs enough to it to let the DM fill in the rest. This module does that pretty well. There’s just enough detail in the room contents section to get your brain going. WTF is up with the bandits? Why is there a frigging Balrog in that room?. (YEs, there’s a fucking BALROG in one of the rooms. Note a Type 6, a BALROG. holy shit!) “Table is set for dinner with 5 drained Bandit bodies.” What’s going on with that? This is where Barsh comes in.

Immediately after the original keys there are three or so pages of keys written by Barsh as an alternative keying. It would be best to say that these encounters are inspired by the original encounters but are scaled a bit better. Everyone who sees the first keys and attempts to run the module is going to make up some stories about why the creatures are where they are. Barsh has written down his interpretation and provided it to us. For example, the fighter is no longer a prisoner but is now a wounded guy hiding and he still joins the party if healed. Giant rat rooms are now full of debris and are the dump for the complex. Goblins are now the sometimes menial servants. That Balrog is now a Vrock visiting the vampires, and so forth. Barsh brings some logic and scaling but keeps a lot of the idiosyncratic encounters, like the two wizards, good and evil, who are hunting each other. Sadly, the madman and housecats are gone.

The original module is insanely hard. Recall that Balrog? Well there’s about a gazillion vampires down there also. The module difficulty ramps up seriously around the third level. Barsh mitigates a lot of this in his rekey, especially by introducing the Lesser Vampire to allow his to retain the large number of ‘Vampires’ but not make the adventure absurdly difficult for the players. Both adventures have a distinct lack of ‘tricks’, or things to mess around with in the dungeon but both also have a decent amount of interaction between rooms and groups. The extra text Barsh provides does a decent job putting the various groups in to context. The two versions are both great, perhaps only missing some names for the various rooms (“Bedroom”, “Study”, etc) and maybe some more interesting magical items. If any product could support weird-ass magic items then it would be this one.

A cool historical artifact and a great module.

1 Response to V2 – Palace of the Vampire Queen