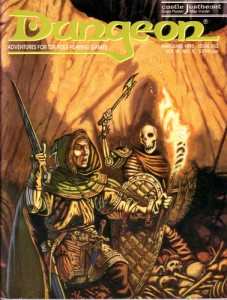 This is a nice little journeyman adventure. You’re asked to find and loot a tomb to recover a Cube of Force, splitting a share of the treasure found. You have a scroll telling you how to summon the tomb, and a ruined town to explore, containing the objects hinted at needing in the scroll. Once summoned there is a small ten room or so dungeon crawl. The village reminds me a bit of the Phandelver ruined town, and the dungeon has a decent number of puzzle like things to overcome. How do you cross the chasm? Or clear the rubble? The solution to several of them is open-ended. There’s also a nice talking monster. I like the ruined town and scroll; players always like figuring things out and this this gives them that opportunity. There are little clues as to what the buildings used to be, and the scroll alludes to things in a decent way. The whole “loan the party +1 weaponz at the beginning”, so they can defeat 1 undead monster in the dungeon, is a bit lame. Better to just nerf the +1 requirement. There’s also a couple of secret doors that must be found if the adventure is to continue. Probably not a big deal, and easily dealt with by the DM, but “Roll successfully to continue the adventure” always rubs me the wrong way. Worth checking out.

This “adventure” is really just one scene: an ambush by a wolf-were/jackle-weres at an inn. The inn is empty but for the PC’s and the monsters run the place in disguise. The party is supposed to be lured into thinking they are were-wolves and use silver, when they actually need +1/cold iron, I guess. It, inexplicably, has a regional map show where the inn is. That plays no role in the adventure. It has TONS of read-aloud. Not the worst I’ve ever seen, but close enough to make me think about it. The sham is telegraphed by seeing two jackals outside the inn. There’s also all this nonsense about how they watch the party and might not open the inn or attack if they think the party is too tough. Uh … so, now Dungeon is publishing adventures about the Road Not Taken? “Let’s play tonight!” [Nothing happens for 4 hours.] “You guys were too tough, the monsters decided not to attack.” This is the flip-side of the moron-PC’s who “are just doing what their character would.” Great jackass, the rest of us are here to play D&D. Jackals mean jackal-were in my book. There is seriously no reason for this thing to exist as it does. I guess when you “win” you get to keep the inn and that could be a base of operations? A side-trek expanded to six pages, with about as much content as a side-trek usually has. IE: 2 paragraphs worth.

I want to like this. A keep has been taken over by brigands. It’s got a force field. You go through a forest to explore a wizards tower to remove the force field and then free the keep, and it’s lord, from the brigands. The first parts of the adventure are pretty good but I’m blinded by a couple of … inefficiencies, in the last part, the keep. It starts with the whole maiden “please rescue my father” thing. Investigating the keep finds it covered by a force-field. The maiden suggests seeking out a wizard who has helped in the past. To get there you go through a forest. So far so good. The hook is lame, Zzzzzz. The forest journey, while small, is classically themed and I drool for the classics. You meet a centaur. You can befriend him. If so some things in the forest are easier. There are werewolves in disguise that can lead you into a trap. Killer trees. Very nice little encounters, particularly the centaur and how it’s used. Friendly, appeals to mythology without being heavy-handed about it (magic arrows, not a complete dick, helpful.) The wizards tower is abandoned and so this is the exploration part of the adventure. There’s a thing done with an illusion that’s not actually an illusion. I haven’t decided if that’s playing fair or not. SOmeone tells you that the wizard likes illusions and that three-headed dragons are extinct and this is just the sort of thing the wizard would do … except the dragon is real. The maiden, and perhaps the centaur, are also accompanying the party, at least for a portion of the adventure. This sets off ALL sorts of alarm bells. I’ve seen DM’s Pet NPC’s a lot and any hint of it sets me off. These are done well, even if there is an implied “have to protect the maiden” escort mission aspect to some of this.

My problems is with the final part, the keep. I freely admit I’m unduly bothered by it. The NPC brigands in the keep are provided personalities. I’m not sure that works. They are going to get hacked down. There IS crystal ball, so maybe the personalities work in that context. Each of the keep rooms gets a full description. This is my major malfunction. This isn’t an exploration adventure. Detailed room descriptions are useless. The room descriptions should have focused on how they would be used by the brigands during the assault. How the brigands react, and ideas for what they do in the room if trapped. The kitchen goes into GREAT detail detailing a normal kitchen. While the brigands have some locations for them, that vary a bit, what tey do when the castle is attacked is not described very well, or at all. But this is the main aspect of the adventure. Instead of Mission Impossible/Where Eagles Dare descriptions we are instead provided with an archaeology tomb description style. 🙁

Just like in the Long Long Trailer, everything old is new again. In this nice little adventure the party is hired by a wizard to bring a young girls kidnapped parents. This leads to the girl goading the party in to killing some dragons at a Cult of the Dragon camp, and then goading them into messing up negotiations between the Zhentarim (Hail Hydra!) and the Cult of Tiamat (Hail Tiamat!) She’s actually a steel dragon and her parents were willed by the dragons at the cult camp. This thing starts with fiction (Ug!) but the rest of it is kind of nice, if you can take the style at the time. The set up with the wizard hiring the party is a little forced (he has a campy personality) but his motivations come across much less forced than many adventures. This is a compliment to the writing style more than anything else. There’s a really good wandering monster table for the party’s journey to the kidnappers region in which the encounters have little bits of extra information. The orc patrol reveals the ambush is captured/questioned, and so on. Just enough extra little bits of information to give the encounter a little kick off. Very Nice. There’s an ambush that’s well done, and a nice “sneak into the camp and kill/investigate things” section. From here the party learns of the EVil Plot that the girl will goad them into messing up. This leads to the next section where two large forces are engaged in negotiations and the party gets to cause trouble to break things up. These last two bits are written quite well. The are presented as a place, independent of the party. This allows the party to interact with them without presupposing any particular actions by the party. It’s then supplemented with a little extra information related to what happens if they do what parties would. This is quite nice; open-ended but with good advice. This is supplemented by little bits of what the various creatures/people do when they encounter trouble; how they react, who else reacts, etc. This is a great help to the DM. It also helps to give little hints. As the adventure points out, during the negotiations, the party will already be familiar with the signal whistles the cult carries because they encountered them at the cult camp. Continuity helps present realism. I REALLY like the last part, where the party has the chance to mess up the negotiations. It’s these sorts of situations in which RPG”s excel. The party is SURE to come up with some kooky plan and the creation and unfolding disaster of kooky character/player plans is one of the great joys of D&D. Also a shout out to the regional map art style Quite evocative and interesting while still portraying facts. A combination of traditional line drawn maps with a kind of cut out vignette glued on it. A very lightweight version of Terry Gilliam, or of an older illustrated map/manuscript. If Hoard of the Dragon Queen had been like this adventure then I wouldn’t have blasted it as much. Too many words, but you can’t avoid that in Dungeon. Nice adventure though, even with the annoying little girl/lies from the dragon.