F3 – Many Gates of the Gann 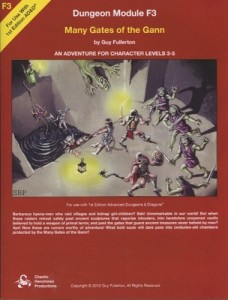 Barbarous hyena-men who raid villages and kidnap girl-children? Bah! Unremarkable in our world! But when these raiders retreat safely past ancient sculptures that vaporize intruders, into heretofore unopened vaults believed to hold a weapon of primal terror, and past the gates that guard ancient treasures never beheld by man? Aye! Now these are rumors worthy of adventure! What bold souls will dare pass into centuries-old chambers protected by the Many Gates of the Gann?

Holy crap, a dungeon! A real dungeon! For a game called Dungeons & Dragons there’s a distinct lack of dungeon exploring that goes on in most games. Lot’s of generalized adventuring and lots of impostors calling themselves dungeons but damn few multi-level dungeons. Modern examples include Stonehell, and taken as a whole The Darkness Beneath from Fight On!. Maybe ASE1 counts, but it’s really only one level. Products that contain a multi-level dungeon of decent length seem to be few and far between. This is one. Multiple levels, complex map, and some kind of weird OD&D and weird fantasy thing all bring the noise in a GREAT dungeoncrawl. This is it, this is what you’re waiting for. The cover unabashedly proclaims it’s for use with AD&D and the module makes use of the MM, MM2 and the best of the best: the FF.

All of the introductory bullshit takes up only one page, the first one. A couple of paragraphs describing the history of the dungeon, a couple more that describes some rumors, and a couple more describing general dungeon features. It’s perfect. It’s exactly what I’m looking for in an introduction. The history is terse and explains why the dungeon exists, it’s first owner, and why the various groups are now in the dungeon. The rumors compliment this and act as additional hooks. The features get all of the samey-samey descriptions out of the way and allow the meat of the module to concentrate on the new and wonderful. The Gann is some reprobate wizard that set up the dungeon and left some guardians. In the centuries since he moved on a few more groups have appeared in separate waves and set up shop and now all coexist together to various degrees. Factions! There’s factions! I LOVE factions! Multiple groups in the dungeon make more some great role-play opportunity in addition to the variety they add to Plan A: Hacking down everything in sight. In this dungeon you’ve got the servitor apes of The Gann doing their thing. You’ve got Gnolls & Flinds going on raids. You’ve got Moorlocks running around. You’ve got weird intelligent evil snake hybrid things. You’ve got The Ganns abominations wandering about. You’ve got vermin. You’ve got undead. You’ve got an evil mastermind in the dungeon. And you’ve STILL got a metric fuck-ton of rooms with nothing in it or no creatures in it! It’s great! Any party should have MORE than enough room to get themselves in to trouble with multiple groups, make alliances, break alliances, get backstabbed, or any of a bazillion other things that can go on when you’ve got this many groups floating about in a hostile dungeon environment. And yet it doesn’t feel crowded at all. The place feels perfectly right in terms of occupation density. Quite a feat.A special shout out to the snake things. They are evil intelligent giant snakes. They half swallow people, so the persons upper half sticks out of their mouth, and then they get the persons powers also, resulting in kind of snake/person hybrid monster. Pretty damn cool!

The wandering monsters table is made up of vermin, creatures found in the dungeon, and special groups found in the dungeon. For example you might run in to some of the gnolls, or servitor apes. You might also run in to some sandlings or a para-elemental, things left over from The ganns meddling. Pretty nice table for the most part, although I generally like my wanderers to be doing something while wandering. The map is three levels with about 50 keyed encounters on each of the first two levels and another twenty or so on the third level. The maps are EXCELLENT and show the kind of thoughtful looping design that makes for a good exploratory dungeon crawl. These maps are much much more than just some random geomorphs or an effort to fill a page. They look much more interesting than than those two techniques would produce. There’s lots of statues, one-way doors, alcoves, pillars, slanty hallways and odd shapes to go with your portcullis’ ledges, vertical shafts, and secret doors. I particularly like the placement of the secret doors: careful mapping will probably reveal that there should be a room where there is none … Great design. The party will be fleeing down unknown paths, getting ambushed from behind, and sneaking around encounters they don’t want to have, which is exactly what this sort of map style allows you to do.

Let’s talk encounters. The title page has an illustration of the dungeon entrance. A door in a mountainside off its hinges that is flanked by two giant stone ape heads. THAT SHOOT RED DISINTEGRATION BEAMS FROM THEIR EYES! Yeah baby, you know this is gonna be a good one. There are tons and tons and strange and idiosyncratic encounters in this place. Weird ass puzzles with clues in other places. These don’t act as choke points to the adventure but rather serve to provide extra little bonuses for those groups that take the time and effort to solve them. There’s an automated surgery suite. There’s a wizards lab with a jar that has a raven in it. Its brain is massively overgrown and almost fills the jar. Gonna mess with it? Huh? Huh? Go ahead buddy, push the big red button. Oh you did?! GRELL! It makes perfect sense! Many of the monsters have a kind of naturalistic element to them. They make sense in the environment they are in, even for something as strange as a Grell. Ghouls? Human captives being fed human meat to turn them. ESP Potion? Oh, you get that from the jar stuffed full of human brains. There’s not really an effort made to explain things, which I LOATHE in a module, but rather the elements appear in a way that make sense. I’m not sure how to label it other than naturalistic. Things like the Grells and ESP portions. Vargouille, Cifals; the weirdest stuff just makes sense in this module. Gibbering heads causing confusion? I’ll take a room full! Modules like this always get me super excited and I end up gushing incoherently about how cool they are. Empty rooms. Rooms with weird stuff to play with. Puzzles done the right way. Factions in the dungeon. Weird. Whimsy. There’s just SO MUCH going on that the dungeon could support many groups making repeated forays in to it. Which is EXACTLY how a dungeon like this is supposed to play. Ohhhh … did I mention the Sandmen trapped in the giant hourglasses by The Gann and are now begging for release? COOL! There’s just enough weird and whimsy mixed in with the book magic items to add some spice to life. More variety in magic items is always appreciated; I hate seeing staves of striking and other book items, unless they are done up in some strange way, like the staff actually being a giant semi-petrified snake or something. The mundane treasures are all really great. Lots of gems, jewelry, trade items, and other ‘mundane’ things that add a whole lot of variety and differentiate significantly from the usual “chest with 2000gp” boring stuff.

This reminds me a lot, in a good way, of WG5: Mordenkainen’s Fantastic Adventure. Multiple levels, lots of weird stuff to play with and lots going on in the dungeon. Certainly this is one of the best of the new OSR adventurers. It’s the perfect environment for the players to come away with many great memories and for the DM to be inspired by.

You can get this on DriveThru. And you should.