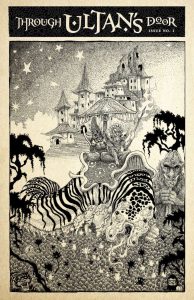 Go through Ultan’s door in this inaugural issue into the Ruins of the Inquisitor’s Theater, a 30 room dungeon replete with oneiric puddings, delicate shadow puppets, giggling white swine, and much more. This 36 page zine contains everything you need to launch a D&D campaign in the Zyan, flying city of the dreamlands.

This forty page “zine” contains a thirty page dungeon and the supporting monsters, spells, etc. Lush, rich prose, the ruins of a decadent empire, and heavy opium clouds bring the OD&D HARD. Digest format is as digest format does. It’s good. I’m also predisposed to this kind of shit.

I didn’t think people still used opium in the US. This adventure proves me wrongs. Yes, that’s a compliment. It’s important, I think, that I communicate the vibe of this adventure. There’s this thing that some of the Psychedelic Fantasy adventures fell in to, and some of the Calithena/Bowman Darkness Beneath adventure briefly hit upon. It’s also present in in some of the pointcrawl work of Slumbering Ursine and those world weary decadent elves of that setting. From the Vats, Operation Unfathomable, Blue Medusa and some other Patrick shit, the city from ASE1, a touch of Tekumel, and Lapis Observatory. There’s this lush, sometimes lurid, velvety decadance … sometimes in the writing, sometimes in the environment, sometimes in the imagination behind the encounters. There’s this intro to a Frankie Goes to Hollywood mix, cribbed from Nietzsche I think, that gives me a certain feeling when I listen to it and this adventure reminds me of that feeling.

A part of this is the OD&D thing it’s got going. By that I mean, in part, the monsters are new. You don’t know what a new monsters will do. It’s powers are unknown. That creates apprehension in the players and that’s usually a great thing for an adventure to do. Not only are the monsters new, the descriptions focus entirely on the actual play of the creatures. Descriptions are: Sinuous white swine, with children’s hands, and mischievous human eyes, or Each is a tangle of raven’s wings with no body or head, flitting erratically like a quick moving bat. In the center of the conjoined wings is a single staring eye that gives baleful glares like cutting knives or worse. That’s what the characters encounter so that’s what the description says. The only addition to that description is their spoor (hints to come) and the monster stats. No bullshit history or crap to clog up the adventure … just pure impact for the players. Fucking. Perfect.

There’s another part of the OD&D vibe that tends to concentrate on the non-standard encounter. I’m not saying it well, but there tends to be this de rigeur way of writing encounters. It almost seems like there’s this hidden formula that people follow to create a boring encounter thats the same as every other boring encounter. Tolkien genericism. I’m not bitching about orcs, I’m bitching that they always appear the same way, as do pit traps, etc. There’s this emphasis on mechanics, as if they come first “a 100’ pit trap”, and then the rest follows. When I talk about OD&D encounters/imagination I’m then I’m talking about that being flipped There’s some weird ass scene imagined … that’s the focus, and then some mechanics are are lightly bolted on. There’s this room, smelling of decay, with a straw floor, and a balcony up above, and three bodies hanging from it with hoods over their heads … and a bear trap in straw under each body. Balcony with hanging bodies and bear trap … just a little twist that keeps it fresh. And this adventure does that over and over again.

The descriptions are lush and rich with great imagery. A door of cerulean blue and gold leaf glittering in the candlelight. Or, to directly quote: “The statue at the end of the room is made of basalt. It depicts a robed figure, with a long beaked mask. She pulls apart her robes, and dozens of small- er beaked masks peer forth form the darkness beneath, pressing out. Lapis Lazuli borders her robes, and the eyes of the masks sparkle with polished carnelians and peridots.” That’s a pretty cool thing that I’m DYING to run! Which is exactly what I’m looking for. I want to be excited. Ben jabbed an idea in to my head and I can fill in the rest effortlessly because of his ability to communicate the seed to me, the DM. WHich I can them have a much better chance of doing the same for my players … and communicate my enthusiasm to them. Nd, as an aside, much of the treasure is great also. A necklace of bismuth stones strung on a chain of platinum, each stone a miniature rainbow labyrinth. Fuck Yeah I want that thing man! If you have treasure that the players want to keep, wear, and use, instead of just abstracting away in to gp, then you’ve done a good job and this is a good job.

Twenty-ish rooms means the map isn’t too large, but it’s good enough, and it appears that the next “issue” will be the next level of the dungeon. My only major complaint is that the room numbering is not as trivially legible as I would prefer.

Ben’s got an overview of the game world this comes from, a kind of Dreamlands-ish thing, on his blog. That should give you an idea of what you are getting yourself in to. These days Dreamlands makes me think “arbitrary”, but that’s not the case here. This is a concrete, real adventure.
http://maziriansgarden.blogspot.com/2017/09/two-years-through-ultans-door-zyan.html

Another great example of a “going to a freaky place” adventure … with the door signaling that the rules are all wrong and every perversion is justified in the mythic underworld … communicated via the door transition.

This is $5 at DriveThru. The preview is ok. Showing some of the rooms, or wandering table, would have been better. The general fluff stuff is ok, amd gives you a view in to the writing style, but the actual rooms and wanders give you and better view in to the FOCUS that the actual rooms give, and encounter types. As is, what’s previewed seems to imply a longer writing style than is actually encountered and not as much of the OD&D style. It’s more setting than adventure in the preview.
https://www.drivethrurpg.com/product/254659/Through-Ultans-Door-Issue-1?affiliate_id=1892600

It is, of course, Frankie, and Frankie only …

19 Responses to Through Ultan’s Door #1