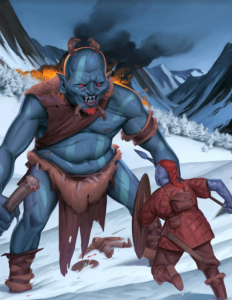 This 42 page mess is an non-linear sandbox style adventure, or so the adventure tells us, repeatedly. Non-linear by the standards of Apocalypse Engine, maybe, but not when compared to anything above “dreck’ level adventures. A couple of faction camps outside of a linear dungeon that runs between them underground is all you get. It is the most basic of things, expanded to 42 pages.

Some giants are laying siege to a jarls fort. The fort guards one end of Moria. Out in the woods are some Freefolk in a camp that sits on another entrance to Moria. They have the giant chiefs daughter held hostage to get them to do the siege of the jarl fort. This COULD be a great gasoline storage facility for tossing in the molotov that is The Party. Instead it’s dull.

The fort and freefolks camp each get about two pages. It’s starts will some bullets. Great! The important bits! Oh, no, it’s just all trivia, expanded upon the main text that follows. It tells us the freefolk are descended from jormundt. It tells us the camp sits over the entrance to Moria. It tells us it holds the jotunns daughter. It’s fact based boring shit. Or it’s useless trivia shit that doesn’t contribute much to the actual play. A great gaping fetid maw that everyone avoids and the sun seems to shine a little dimmer … that’s a good bullet, but “Covers the entrance to Moria” is just boring. The difference should be obvious. One makes the DM feels a certain way (if done well) and they in turn communicate that vibe, and expand upon it effortlessly, to the players. Worse still is the trivia, like the jormundt thing. Ok. Jortmundt. Why the fuck does the party care? How does that lead to interactivity? Actual play? No, not implies x which implies y. Play. Now. It doesn’t.

Then the main text follows and it expands upon the uselessness. A column full of dull and useless trivia. The dungeon is sometimes worse, giving you lots of wasted rooms, text, and the like, combined with overly long and boring descriptions when you DO reach something interesting. And it’s essentially linear. Joy. Linear is useless. Passing by a dark side passage freaks the party the fuck out, and there’s value in that. Uncertainty is what the underworld is all about.

Look, I get it. Apocalypse is a different beast. It’s not D&D. Some people like it and that’s ok. But bad writing is not ok. Making us dig through text to find something useless. Trivia. Fact based descriptions that are not in the least evocative. Those should be common elements regardless of the system and how it plays. You want linear? Fine, you can enjoy that, I guess. But badly written? Nope.

I will say that there is something the rest of D&D could steal from Apocalypse: the creature blocks. Or, what’s in them anyway; the blocks themselves seems longly formatted. But, it uses those brief little bursts to communicate flavor. Creatures have Trail Tags, like “silent lurker, aquatic, slippery, surprisingly strong.” That’s GREAT. Less is more. It leaves you with impressions that you are free to riff on. THE SAME THING THE REST OF THE DESCRIPTIONS/ROOMS SHOULD ALSO BE DOING. Then there’s this little abilities section and some TINY comat notes, like leads tribe in to combat with shrieks, or some such. Again, GREAT. Cues for the DM when running them! They aren’t always done well, but other RPG’s could learn a lot from them. (The same could be said for 4e’s special monster abilities … assuming everyone had not memorized the MM.) This specialness and abstraction of mechanics, rather than focusing on the details, also applies to the magic items and, because of that, they have flavor and character. Which is what the fuck magic items SHOULD have.

You know, I had a feeling, based on the name, what this was going to be and I was right. I try not to prejudge adventure but, man, I wish authoris would pay more attention. I guess I blame T$S and WOTC. They have spent MANY years publishing shitty adventures and people have “learned” that is the correct way to do things. But, fuck man, look around at what people consider to be good outside of your echo chamber. Yeah, you have to put some work in. A lot of fuckwits (and there are A LOT, they drown out critical thought) will tell you that something is good that is not. You gotta put some effort in. But you’ll be a better writer.

This is $5 at DriveThru. The preview is 19 pages long; and I applaud the authors for this, it gives you a real chance to see what the actual writing is like before purchase. Jumping to the last third or so will show you the bullets point summaries that begin each section (a great idea poorly implemented) and the expanded upon dullness. https://www.drivethrurpg.com/product/246611/Stjernheim-The-Siege-of-Deepknell-Hold?affiliate_id=1892600