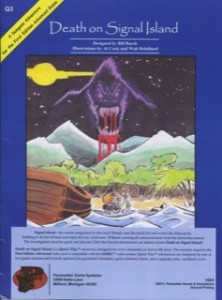 Q3 – Death on Signal Island, is an OSRIC adventure for 4-6 characters of 2-4th level. It’s the third in the Pacesetter Quick Play series, designed to played in a single session or two. As such these tend to be brief affairs, and this is no exception. It’s 18 pages long with three pages of introduction, seven for the ten keyed encounters, and a page for the new monster and new magic item introduced. We get a full page for the map and another for a set of pre-gens. The rest is composed of the license, table of contents/credits, and two pages of ads.

The adventure revolves around the PC’s investigating why the fort on Signal Island has gone silent. It seems that the city keeps a guard on the island, located in the bay, and they haven’t been in contact for a bit.  Ought oh! The set up here is similar to Alien: why can’t you leave the haunted house? Because it’s an island you were dropped off on. The island is quite small and has no wanderers on it. There are two animals on the island, some Sahuagin, and some smugglers. Finally, you get some Lacedons and the big bad guy monster himself. Not a lot going on; just ten keyed encounters over seven pages and none of those really stand out as interesting at all. Smugglers & Sahuagin may be the most overused monsters ever in coastal adventures; I groan now when I see them in print. A snake dropping out of a tree and a trapdoor spider do not a thrilling island adventure make.

I’m really at a kind of loss to describe this one any more. It’s short, but then again the first two in this series were short also, and Steading of the Hill Giants was what, 8 pages long? Unlike the first two in this series there’s just nothing of interest going on. It could be that this is a symptom of the size and the type of adventure. While Q1 was location based and Q2 was location based and had a strong hook, Q3 is more of a wilderness adventure, without wandering monsters or a survival challenge, and no strong overall tie to mesh the various encounters in to a cohesive whole. There are some attempts to mix things together; you could solve a mystery by going everywhere and talking to everyone and hacking everything, but there’s no need to. It’s pretty obvious pretty quickly what’s going on, and once you hack it you’ve solved your problems.