Crypt of the Dog Witch 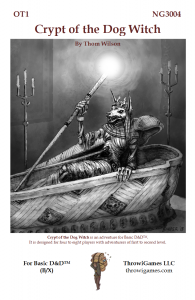 The god Lupaarus has returned to the peaceful land of Otium, bringing hordes of canine creatures down on the unprepared farmers and unprotected lands. The key to stopping the onslaught is for brave heroes to find the five artifacts of Lupaarus before his minions do—the first of which is guarded by the Dog Witch! Can the adventurers make it to the crypt before their foes?

This sixteen page adventure describes a nineteen room crypt full of undead. Unfocused text and uninteresting encounters combine to form a rather forgettable start to the five adventure arc that this is the first of.

“Roll as often as you want for wanderers.” Why does that phrase piss me off so much? I think maybe it betrays a style of play that does not have a neutral DM.I expect the DM to be an impartial arbiter of the game world … while working to ensure I have fun. To that end I expect them to set up the world rules ands then follow them. Wanderers on a 1d6 every day, or three times a day, or 12 times a day, sets up a system that the DM follows. It’s random, and from such things good times are had as the DM and players experience the game world together, it’s ups and downs. But “roll when you want” betrays a different style. One in which the DM controls the world. They are not the JUDGE of the actions but rather the instigator of the actions. To that belongs the realm of the adversarial DM … something I LOATHE beyond words. (and it could be 4e’s focus on tactical mini’s play is adversarial, and thus a reason I hate 4e.)

Anyway, in a call back to B2, a certain keep in a borderlands area is suffering increasing raids by dog-like creatures. Portents of the doom of an evil dog god returning. The party is sent out to recover the first of five magical gem thingies so the world of man can dismiss the dog deity. The first is twelve days away, in a temple/crypt. The background is mostly abstracted, but the “pseudo-invasion” thing is something interesting that I like in those scandinavian the Dragon” adventures and I like it here, abstracted to hell and back or no. It’s an interesting thing to chuck in to a beginning campaign and help provides a lot of pretext for monsters, troops, etc.

The map here is not so bad. Nineteen rooms is larger than most and several of the areas have smaller loops in them. There’s also a nice bit or two in the encounters, with a red font dripping healing liquid and so on. There are also some Dm Tips scattered throughout. These generally convey the intent of the encounter/thing, That’s nice … almost an explanation of why it is like it is, or what the designer is trying to do with the encounter. Of course, it could also be written better … This concludes “positive Bryce.”

I found the adventure boring. It’s mostly just another site stuffed full of boring undead who attack. Six skeletons who attack. Thouls who attack. Ghoul who attacks. This is combined with a relatively boring adventuring environment. The high priest was trapped in his bedroom for ever and turned in to a ghoul. But that’s it. There’s no flavor beyond that. No insane scribblings, or torn up room. Just that he was trapped in his bedroom and turned in to a ghoul. BORING. Likewise skeletons rise up and attack. The rooms are devoid of joy.

Not to mention its padded out. The text for the ghoul room is:
The former high priest, second-in- command to the priestess, remained behind to help protect the crypt from looters. Unfortunately, he has been trapped in his bedchambers the entire time, becoming a long ago. …A residual spell—cast by the priest before he died—still hangs on the foul creature …

Note the embedded background and the explanation for WHY something is. Removing that gives you enough room to add some colour to the room. Which it, and the rest of the rooms, sorely need.

Undead are sometimes found outside of the room they are in … but by the time you read the room the party is already there, meaning no chance they were outside,. Unless you read ahead with your precog. Or note it on the map while using our highlighter? Or, maybe the designer puts that on map FOR YOU? Alas, no. *YAWN* Room three, a storeroom, tells us that “Food and supplies were once stocked behind this locked door. The charac- ters will find most everything deterio- rated or rotted.” Great, two sentences when you could have told us that with the room title.ARG! But, hey, at least there are +1 weapons to be found …

This is $1 at DriveThru. The preview is sixteen pages. I encourage you to review room one on document page three, or room eight, on page six, and supply your own critique.https://www.drivethrurpg.com/product/249374/OT1–Crypt-of-the-Dog-Witch?affiliate_id=1892600