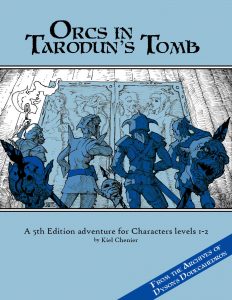 This eighteen page adventure deals with a small eight room tomb that has been invaded by orcs. Compared to other 5 adventures, it’s a masterpiece. Compared to anything actually good, it’s constrained. It does some nice things with layout, but it comes off as dull and uninteresting, with a “find the red key for the red door” fetch quest to finish things off.

The rooms take up about one column per. First comes a little mini-map of the room, and then a bullet point format of the room features. All in a generous easy-on-the-eyes font. I like the bullet point style chosen. Combined with the bolding used it makes it easy to scan and absorb the different aspects to the encounters. Keil has chosen a good format for presenting information. It’s not the only way to do things, but it does work. He’s also got a little bit of order of battle information.

The map is constraining & simple. I don’t think the map insets work for this. The descriptions are not quite evocative. There’s not much to fuck with. A prisoner betrays you. Useless information abounds. It’s just not that interesting.

I’ve said in the past that I don’t like Dyson’s maps. I think, though, that it may be I don’t like MOST of his maps. It seems like most adventures that I see that use his maps tend to use the smaller maps. Smaller maps are just not that interesting. There’s not enough space for something to go on. It doesn’t have room to breathe. I recall seeing a couple of larger maps that were ok, but I just don’t think it’s possible to have a good exploration map with eight rooms. I guess that’s not Dyson’s fault, t’s more the people who choose to write an eight room adventure. And for no reason whatsoever let me name drop now. Kiel.

I don’t find the descriptions evocative at all. Just more like facts. “A holy room devoted to the preparation of bodies for the afterlife. Long tables line the walls, covered in an assortment of embalming tools, and full and empty urns.” Or how about “The stone walls and ceiling are painted with detailed frescoes of the elven afterlife, showing the souls of elves rising from their bodies towards the ceiling.” Note, that if an elf sees that last room then they have to make a save or be overcome by the frescoes majesty. That’s a nice effect, but it doesn’t match the boring ass description.

It also engages in the a little bit of extraneous tables & information. It gives names to all of the corpses in one tomb, that has no impact on the game. It’s got a rando orc name generator … because somehow that’s going to be important to the adventure? They attack immediately in, I think, every case?

And of course, the prisoner you rescue turns on you. At this point I just kill all prisoners. It’s easier. I don’t recall the last time I saw prisoners NOT turn on PC’s. That should be the new trope, helpful prisoners.

And there’s no magical treasure? What’s up with that? This dude was an ancient elven hero. And his “hoard” is 200gp in a chest, some small silver statues, a picture, and a couple of books. Nice hoard? More like “stash in my mattress” maybe?

Let’s talk 5e. Compared to just about every other 5e adventure on earth, this thing is magnificent. It’s clear and gets in and out fast. But that’s more commentary of the state of the 5e dreck.

This is $5 at DriveThru. The preview is four pages and shows you next to nothing. You do get to see the hooks on the last page. The first one, with the elf prince trapped in his castle, could be nice if expanded upon.https://www.drivethrurpg.com/product/248046/Orcs-in-Taroduns-Tomb-5e?affiliate_id=1892600