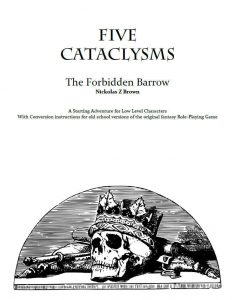 This is a Forbidden Barrow, where a corrupt, assassinated King and his aides are entombed, sealed off such that the world may forget them.

(It’s it 9am and I am drinking single malt, but I also seem to be making more mistakes than usual this morning. My apologies.)

This fourteen page adventure describes a tomb complex with about 25 rooms. Single-column, it gets a little hack-y towards the end. In spite of that it shows promise. Thought was given to formatting (in spit of the single column) and it does nice things with both the description and the monsters. I’d say it’s a fairly standard tomb explore, better than 90% of those written. Dude has potential.

What if you were competent, but just didn’t care … or maybe you got stuck on a problem (like … how to layout two-column.) That’s this adventure. It’s single column formatting is frustrating, but the rest of it is at least at a talented amateur level of quality. Not outstanding, but clearly better than the masses of dreck pumped out. The descriptions are one of two sentences, with a word of two bolded in them. The bolding is also a heading for follow-up information. Thus we get a very short, potentially evocative, description that has bolded references to follow-up text for the DM. This is a pretty good format. It’s easy to scan and locate information, because pf the bolding and the paragraph separation, while putting first things first. IE: the information the DM immediately needs. IE: the description. The room one description is:
01: A decrepit stairway winds downwards about 100’. The stairs are as stone slabs set into the walls, many of them crumbling or broken away. If you’re not careful, you could lose your footing.

The next heading, separated by a line of whitespace, is …
“Careful – (It takes a full turn to …”

Thus we get a short little description first, the first thing the DM needs for the room, in this case. Then a pointer to follow-up information.

The descriptions could be a little stronger. There is clearly an attempt to do something interesting, but I think it falls down and/or is not as strong as it could be. Once you’ve got a decent draft it can be rough to go back and spend 15-30 minutes on each room description, but it can really pay off. It’s the kind of perfectionism that bumps an ok description in to a great evocative one. In this case, tnone-careful people can fall down the stairs, taking from 1d6 to 10d6 damage … maybe warranting a few different word choices up front to better communicate the nature of the stairs.

I like the monsters in this, or some of them at least. A gibbering ghost, an acidic convulsing mound of skeletons. Someone tried a bit harder than usual. New creatures put the fear of the unknown in to the players, and in a gold=xp/exploration game that’s a key element. Then again “an armed and armored wight with a greatsword!” is not the soul of evocative writing, nor is “charred skeleton.” A word or two extra, with better word choice, again would have added a lot. There’s also some unusual attack modes, like a skeleton that writes in a book and the party takes the damage he describes. Nifty.

The encounters are above average, for the most part. It’s range of the old tropes and a few new things. The crumbling bridge is a classic, and I seem to never get tired of it. (Nor to players? I don’t know why.) As the tombs of the evil bads, propre, are reached it does degenerate a bit in to a hack-a-thon. A couple attack immediately, others have to clamber up. This is in contrast to the beginning sections where the party usually has to fuck with something before they stir up the undead. It IS the big bad though, so, perhaps we can be forgiven. The skeleton forces do get a little same-y after awhile, even though they all tend to have unique powers. “Another skeleton?”

This does raise an interesting point: how to judge an attack on a pre-animated undead. You know the mummy is gonna rise/the skeleton guard will animate. You launch a premeditated attack. How to adjudicate it? I tend to allow the party to disrupt the undead ahead of time,

It’s a decent little adventure if you are looking for something mostly straightforward and simple but with creatures that are non-standard. A little work on the writing to make it more evocative and the single-column nature would make it better. Throwing in more twists and a slightly more neutral adventuring environment (which I think speaks to creativity and a different mindset) would have made it even better. Still in all, better than most.

This is $2 at DriveThru. Alas, there is no preview. Bad publisher! No cookie for you!https://www.drivethrurpg.com/product/248651/The-Forbidden-Barrow?affiliate_id=1892600

10 Responses to The Forbidden Barrow