Fishing for Gods in Strade’s Gallows 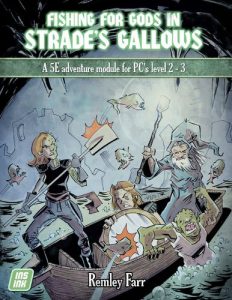 This 55 page adventure (most of which is actual adventure and not index) details the goings-on in a small village, and a ruined fort nearby. The first chunk is very social and sandboxy, as the party explores the village and gets involved in some small intrigues. It leads to the sunken ruins of an old fort and the forces behind what’s really going on. It’s got way too much text and needs edited and formatted WAY better for comprehension. Still, it’s nice to see a 5e sandbox.

It starts with the party killing a Kua-Toa god, and its worshippers switching faith to the party. And someone in the party then slowly mutating over several days in to a new god. This is mostly farce, with the Kua-toa treated like simpletons and doesn’t really impact the adventure except as Yet Another Thing Going On.

I’m a fan of a lot going on, but the worship/mutation raises some interesting theological D&D questions that are, perhaps, best unasked. Visions of characters recruiting cults to mutate themselves come to mind. In any event, the entire worshipper thing is mostly ignored, and really could have used some more words to guide the DM … especially around the ability to control followers, etc.

The adventure has, essentially, two parts:town & dungeon. The parts in town are very social. There are several subplots going on, that could be confused for false leads. These are covered in one page each, which is GREAT presentation style. Everything on one page and easy to find. The idea being that the party nose around town, learn about the subplots and get confused in the main plot and so on. It’s all very social and I like the concept a lot.

The second part, the dungeon, is more linear. Taking place in the ruins of a sunken fort, it has little “adventure areas”, clusters of rooms, connected by a hallway from the last area and another to the new area. Not exactly sterling design but at least its not completely linear.

Both section, town and dungeon, suffer GREATLY from the editing and formatting. The writing is not particularly evocative, but the bulk of the text is irrelevant and gets in the way. Multiple paragraphs of DMs text per room make figuring out what is going on, on the fly at the table, hard to hand/scan. Better use of bolding, whitespace, and indenting would have helped a lot. Or, better yet, removing about?’s of the words. There’s just way way way too much writing for each room. Short, punchy, let the DM fill in the rest.
There is, of course, mountains of backstory mucking things up also. In spite of a magic item called “Gerald the Hatestick”, a sentient staff, it’s mostly flavorless. I find the simpleton kua-toa thing weird also … have they full on turned in to farcical creatures in 5e?

One day the 5e designers will learn to edit and things will improve. One day. This feels like the designer got bogged down in putting things in they thought they needed instead of concentrating on what they had. “I have to have read aloud” or “i need lots of explanation/backstory.” Instead the effort should have been on flavor and the ability to scan at the table.

This is $6 at Dmsguid. The preview is four pages. In spite of that, the writing style is full of display. Just imagine all that writing for each room.
http://www.dmsguild.com/product/171229/Fishing-for-Gods-in-Strades-Gallows

4 Responses to Fishing for Gods in Strade’s Gallows