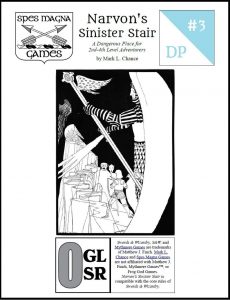 Old-timers still speak of Narvon the Charmer, albeit in hushed tones, as if the long-dead cleric might hear his name as an invitation of some sort. This is, of course, absurd, but also gives eloquent testimony to how feared Narvon was in life. Long ago, Narvon established a strange cult in chambers carved within stony Stolkoya. For a time, the cult flourished, but after only a year, during a night full of strange lights and bizarre lightning, the cult came to its end. Intrepid investigators found almost all of the cult’s members atop Stolkoya, mutilated and charred. The few survivors proved irrevocably mad, gibbering about “frogs from the sky” and “wings that never flap”. As for Narvon, all that remained was his head affixed to a spike. Investigators reported that Narvon’s face in death bore an expression of purest joy. Since then, no one has dared climb Narvon’s Sinister Stair.

This sixteen page adventure details a simple three level dungeon with sixteen rooms. Long and lame read-alouds with a focus on murals and other trivia detract from interesting vignettes and monsters. There’s a clear nugget of some interesting undead & demon monsters, but the rest of the adventure is nothing special.

There’s no plot here, the adventure is presented as ‘a Dangerous Place for 2nd-4th level adventurers.’ The hooks are the usual bunch of “something weird is going on over at the old cult compound”, except there’s also a nice Son of Sam thing with a vagrant explaining the voice of the dead cult leader told him to kill.

It’s got a couple of nice things going for it. First is the whole “told me to kill” thing. The cult leader was a charming guy, so while in the dungeon any PC making a suggestion to another PC or NPC will force a save or they have to do it, ala the Suggestion spell. And if they do it on purpose then they get a little tik mark next to their name on the DM’s notes. Get enough tik marks and its saving throw time to prevent your corruption. That’s a fun little mechanic; those kind of “this IS a weird place!” things always bring a smile to me, especially when they are so clearly a Push Your Luck mechanic.

It’s also got some decent little imagery in places, especially around monsters. A semi-liquified zombie comes to mind, as well a two cultists who died terrified in each others arms … and now form a weird hybrid skeleton creature. Like the “well zombie” in Walking Dead, these bring a nice little bit of extra to the generic Skeleton and Zombie creatures. That’s probably also why I like marching skeleton guard formations so much (in general, that is.) That extra little bit sometimes extends to rooms or treasures, like a mold-choked rotted desk containing a treasure. Oh, wanna search the desk, eh? I did mention it’s mold-choked & rotting, right? Not that it’s yellow mold, or anything, but its a good example of layering of effects (to tempt and put the players in to a tense decision) and nice imagery. There are a couple of other nice features as well, such as same-level stairs.

But, the text is generally not very good. Long read-alouds full of things like “the romo is 20×30 and there are two doors” dominate the descriptions. There’s background information like what the room was once used for and how the cultists used to come in a procession. There’s conclusion words in the read-aloud like “murals show a terrifying religious process” and, in fact, a great deal of emphasis placed on mural descriptions, to little impact on the adventure proper.
IN some cases the read-aloud spoils the fun. A good back-and-forth dm-player style encourages interaction. “There are levers on te wall” invites the players to ask how many and in what position, but that tends to be spoiled by the read-aloud. “There are three levers in u-down-up formation.” LAME!

This is $2 at DriveThru. The preview is eight pages long, which shows you the first nine rooms. Room five, on the sixth page of the [review, is a good example of the read-aloud.https://www.drivethrurpg.com/product/239629/DP-3-Narvons-Sinister-Stair?affiliate_id=1892600