The Ruined Abbey of St Clewd 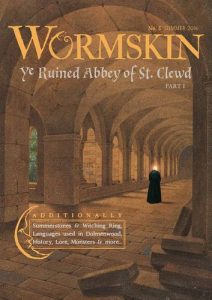 I ended up with another magazine adventure to review, Wormskin #3. This twelve digest page adventure describes the surface level of a ruined abbey in the Dolmenwood. (The entire issue, and I suspect magazine, is devoted to the Dolmenwood setting.) Clearly written, and also clearly limited by its “just the surface ruins” approach. There’s not much content, which forces one to ask some hard questions. It’s also spooky as all fuck.

Let’s talk about “spooky as fuck” first. I seem to remember an old 3e SRD monster book called something like Nightmares & Dreams. It was full of horror themed monsters and did a great job bringing the creepiness to life. This does the same thing with one of its principal encounters. The Gloom is an undead creature formed from a bunch of dead crows. It collects things, like teeth or corneas. It’s a kind of tall skinny man in finery. Offering candy to children. Or encaged in an iron tree cage being freed by dumb kids. You can run in to some kids in this adventure, maybe playing in a very old graveyard. A graveyard with a bunch of open graves, freshly dug up. And the kids all have dirty hands … seems they’re charmed and have been stealing teeth for the Gloom. I’m just a hack reviewer and can’t get CLOSE to the creep that the adventure brings with regard to the Gloom or the children. It’s really well done.

I might also comment that the writing here is very clear. I’m been trying to figure out why and I can’t really put my finger on it. Maybe because it goes from “what the party sees first” to the general to the specific. It tends to focus on stuff that the party will be interested in, and thus directly on play at table rather than trivia (with a single fucking notable exception.) An evocative sentence that you might use when the party first shows up. A line of DM text explaining things. Another line of trap/damage/search mechanics. That’s what the entries all feel like … but I’m not actually sure that’s what’s going on. Whatever. I find the writing style quite effective.

The adventure also devotes 2.5 pages, a huge amount for a 12 page adventure (20%?) to a series of seven murals in the ruined church. It goes in to detail on each. Except for one, the last one, I can find no reason why it does this. It just seems to be trivia, and is completely different from the writing in the rest of the adventure, which is quite focused on actual play. Maybe it bears fruit in the next issue, which describes the underground level?

The whole thing comes off as a bit sparse. Oh, sure the Gloom/children thing is GREAT, but the rest of the level is essentially non-existent. A couple of different ways to find stairs down is about it, except for one hidden treasure. Everything is looted. The murals thing is a big miss, again, unless it pays off in the next dungeon level. Six locations, with two of them having four or five sub-locations. It seems a little sparse. IDK.

As a horror themed stand alone this should work. I’m just having problems reconciling the sparseness with my classical view of an “adventure.” It may be the episodic/zine nature just didn’t work well here and you need the second level for things to click. Or maybe I’m being nice,

This is $5 at DriveThru. The preview shows nothing of the adventure,https://www.drivethrurpg.com/product/187215/Wormskin-Issue-3?affiliate_id=1892600

Here’s the text from location #2, Graveyard. Something about this turns me off at first glance … the length, one paragraph, no bolding I’m pretty sure. But then, reading it … it seems perfectly suited to run. What the players see. What happens when they follow up. Mechanics. GREAT text organization.

“Crumbling stone walls — now sprawling with ivy and buckled by the intruding roots of looming yew and holly trees — surround the abbey’s graveyard, wherein lie the remains of several hundred monks of the lower orders (the more senior monastics were interred in the crypt beneath the chapel).A thorough inspection of the dates of the graves reveals that no one has been buried here during the last 350 years. It is also noticeable that many of the graves are in the process of being carelessly dug up. There is a 2 in 6 chance of one or more of the children described in area 3b being present in the graveyard during the day.”

3 Responses to The Ruined Abbey of St Clewd