The Tomb of Dagobert 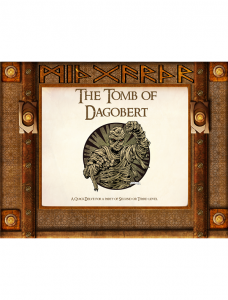 This five page adventure, with two “real pages, is a very simple nine room tomb complex stuffer full of undead. The terse writing style and ok hook are to be commended, but the writing is not evocative. It’s too simple to offer any value.

Skeletons. Zombies Ghouls. A spectre. A mummy. And then a bandit king when you come out. This seems a touch rough for 2nd level characters, in a linear dungeon. I don’t play a lot of 5e so maybe I’m wrong. Most tomb maps bother me anyway, because they tend to be simple. But when you combine it with a bunch of enemies you need to hack past it tends to bum me out. There’s no skill, and not much fun, in slogging through a linear map full of forced combats.

The writing is terse, for 5e anyway, and simple. Five zombies clamber out of their coffins. A brazier flares up when you enter the room, but gives no heat. Really just a couple of sentences per room. Two to four per room should be enough for some rooms, and this adventure does that. But it doesn’t really do it very well. The writing is not evocative. The hi light of the adventure is: “A brazier in the center of this room flares up when the PCs pass through the arch. The flames are magical and put off no heat.” It’s the highlight because it uses the word flares. The rest of the writing is short and fact based … which is better than long wall of text but still not in the “good” category.

I want to bitch about about the encounters proper. They pretty simple combats or “put the key n the hole” tile situations. Again, the brazier is the exception. But something rubs me wrong about it. I think it may be written in a “look at this weird thing!” manner. Interactivity, and the ability to exploit the dungeon, is a key feature of a good adventure I’m not sure this does that. I think maybe I’m looking for the writing to be oriented more toward the party. Can you burn shit with that brazier, even though it has no heat? Steal the heatless fire? It just seems written in a manner that makes it more “look at the mural on the wall.” than “and now you can exploit something.” Window dressing has very little place in my D&D. Interactivity is better.

The last encounter has a trapdoor that leads to the main treasure chamber, we’re told. We’re also told that it’s inaccessible because of a cave in. Uncool. Players, in search of treasure, will go to great lengths. Either the treasure chamber should have been listed or the trapdoor/reference not put in or some guidance given. “one month to dig out,” Otherwise this is trivia, and, again, there’s not much room for trivia in my D&D adventures. The writing has to be directed to actual play at hand. Otherwise it gets in the way of the DM running it.

I will note that the hook has the players coming across a bandit in a crow’s cage hanging at a crossroads, who offers the players treasure map for his freedom. Nice job with that. It’s not the usual hook dreck. Treasure maps are fun. Crows cages are fun. Bandit lords are fun. The quandary is fun, as long as the DM doesn’t punish the players for their choices. He’s gonna die anyway, seems like a quick death is better than a slow one …

This is supposed to be something that you pull out when the players go the “wrong/‘ direction and you need a quick adventure. If the writing communicated the environment better (WITHOUT a higher word count) then it might fulfill its stated purpose, even if it were simple. As is, anyone could come up with the adventure. There’s nothing very interesting except the hook. I like the terse writing, but its also gotta deliver the goods. It don’t.

3 Responses to The Tomb of Dagobert