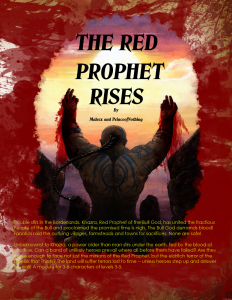 Trouble stirs in the Borderlands. Khazra, Red Prophet of the Bull God, has united the fractious People of the Bull and proclaimed the promised time is nigh. The Bull God demands blood! Fanatics raid the outlying villages, farmsteads and towns for sacrifices. None are safe! Unbeknownst to Khazra, a power older than man stirs under the earth, fed by the blood of sacrifice. Can a band of unlikely heroes prevail where all before them have failed? Are they brave enough to face not just the minions of the Red Prophet, but the eldritch terror of the Obelisk that Thirsts? The land will suffer terrors lost to time–unless heroes step up and answer the call! A module for 3-6 characters of levels 3-5.

I’ve had a rough couple of months. I was happy to run across this adventure and bumped it up in the appearance queue, so things may appear out of order over the next couple of weeks. Just imagine this review appears a week from now.

This 39 page adventure details a canyon and its caves (43 rooms over two levels) that inhabited by a blood-sacrifice cult. With shadows of both the warrior cult from Conan and the enemy from 13th Warrior with a little Zardoz tossed in, it provides a great dynamic environment that has its own thing going on aside from the parties involvement … up to and including “the cult all end up killing themselves by accident.” The environment starts off “mundane” and then gets freakier as the party gets in to the heart of the caves. Well organized and evocative, this is the kind of environment you want to run.

I’m terrible at reviewing good adventures. I never know where to start. I guess can being with the writing.

The writing is evocative without being verbose. At one point there’s a captive centaur forced to fight an opponent to the death. He continues trampling his opponent on the ground “long after the cheers of the crowd have ceased.” Recall, this is a warrior blood cult. Ouch! That’s the kind of writing you get. In this adventure. It doesn’t drone on and on with endless descriptions of room contents or wether the doorway is eight foot tall or nine foot tall. Instead the writing conveys the SENSE of he place. And because it does it can leverage every life experience the DM has had to allow them to fill in the blanks. The horrified onlookers. A blood warrior, sullen with his jaw hanging open, averting his eyes from the massacre. A guy a little too much in to it. All of that can brought by DM to expand the locale as needed, reacting to the players. Good location descriptions don’t describe an locale, but rather the SENSE of the locale. ““Rough-looking men interrupt gulps of ale and bites of charred rabbit with rambunctious laughter around a sizable fire pit.” Indeed!

That same writing then turns around and uses white space, bolding and bullet points to great effect to organize the text. A small text paragraph to convey the sense and then bullets to expand the mechanical aspects. This allows the DM to scan the text quickly and effectively to locate the information they need to run the adventure. The dichotomy of adventure writing is that you get to ignore ALL sense of grammar and style in order to convey the sense of the place … but it has to be perfectly organized to allow the DM to easily run it at the table. This adventure does that.

There’s a nice little time table presented that shows what’s going on at the camp when. Locations have brief notes related to the time table that don’t get in the way. There’s an order of battle for some rooms. “The guards in room 5 might hear a prolonged combat …” or … “If an alarm is raised then …” There’s a summary sheet of monster stats so you’ll have them all at your fingertips when running this. It’s almost as if the designers *gasp* oriented the text so it would be useful to a DM running it at the table! Oh the Humanity!

The rumor table is in voice for the beleaguered people whispering tales of the raiding warriors. The entire place is written as a neutral living environment, a module, not necessarily entirely dependent on the PC”s actions. Up to the point that their blood sacrifices finally work, they raise a god, and it slaughters all of them and eventually maybe blots out the sun. The wanderers chart has a couple of allies and/or prisoners on it. (Even if “33% chance every 10 minutes” seems a little frequent …) The map has some loops in it and feels like caves in a canyon. (Or at least a fantasy version thereof.) The magic items are new and interesting.

There’s mount presented for a Paladin (that’s one of the potential hooks) that FEELS like a paladin’s mount. Aeyron, grandon of the King of Horses! Fuck yeah man! Now THAT’S a paladin’s mount!

There’s even a faction! (Well, besides the prisoners, allies you might meet.) The old shaman doesn’t like the turn the tribe has taken and may recruit the party. This part could be handled a little better … maybe one paragraph on an outline of plan, but I still appreciate having what there is.

Likewise the hooks are essentially non-existent. A little more guidance in getting the party involved would have been nice. As is, the mount or maybe hearing some rumors of a blood cult or raided villages is all there is … and the later is a little weak unless you’re running HEROES. It is 2e, so maybe that’s ok.

Obviously, I like this. As you get in to the caves in the canyon you start to encounter freakier and freakier stuff. STarting with just camped out tribesmen in the canyon and then pentagrams, black obelisks, and cauldrons of blood inside. This is a place, not a railroad. It is that rare of things: A Good Adventure.

This is $5 at DriveThru. The preview is six pages. Page two shows some order of battle/alarms, as well as ath rumors table. The wandering chart and cave map are also included and shows the potential depth the adventure can generate. The last couple of pages are some of the locations, and give you a good look at the location writing and organization. A great preview.
https://www.drivethrurpg.com/product/235540/The-Red-Prophet-Rises?affiliate_id=1892600

5 Responses to The Red Prophet Rises