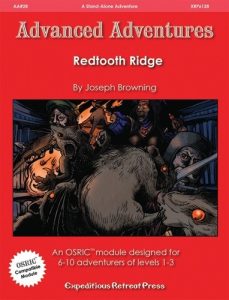 he plain wooden cup the dryad Aralina needs for her great oak’s rebirth has been stolen by creeping foul things! Small, man-like, creatures with great heads assaulted her and, in the confusion, pick-pocketed the cup before fleeing towards Redtooth Ridge. Without her cup, her tree with die before it can reproduce and she will die with it. In her distress, she has offered a reward of a beautiful coral necklace in exchange for her plain wooden cup. The call has gone out and surely a party exists willing to assault Redtooth Ridge?

This thirteen page, sixtyish encounter, adventure details a small wooded ridge and the remains of several buildings on it, primarily an old manor. It has decent maps and most of the encounter feel more like little vignettes with some loose internal logic than they do the more typical isolated-encounters-in-a-ruined-place. It engages in “used to be” and obsesses on ranger and thief mechanics a bit too much, all of which tend to clog up the text more than it should. It doesn’t engage in much that is new but it does deal with goblins, ogres, stirge, zombies, green slime, and the rest in a way that appeals to my love of the classics. A decent little adventure doing decent little things.

This is a pretty classic site based adventure. There’s a small wooded plateau with two paths running up to it. On top is the ruined compound of an old manor estate, as well as a small cave serving as an ogre lair. The family mausoleum is in the plateau cliffs. There’s a small wandering monster table that generally has the creatures lairing on it, with their numbers being depleted as you kill the wanderers. Otherwise, the party is free to do what they will. Exactly the fuck the way these site-based adventures SHOULD be.

The estate is walled, with numerous ways through the walls. There’s an underground/basement area that runs between a couple of outbuildings, as well as a few structures with more than one story, giving the map a little bit of a vertical presence and some interest. The open-ended compound nature of the map, as well as the open nature of the plateau, and the non-linear nature of the basement and manor home maps work well with a site based adventure. There are a number of “hallways with doors off of it” on the map, but there’s enough variety in style that it doesn’t feel constraining or forced. An art piece showing the profile, or better shading of indoor and outdoor areas, would have been appreciated. In addition, some of the map features are missing. Large cracks you can crawl through, and so on, seem to not be on the map but rather in the room descriptions. That’s not good. It would have also been nice to have all the maps on one page, instead of having the text integrated around them, in order to photocopy them easier for hanging on Ye Olde Dm Screen. But this isn’t the end of the world and sweet jesus in heaven thank you for maps that are not throw-away linear plot shitfests. These maps provide options and mystery … which is what ALL maps should do.

The encounters in the adventure almost feel like little vignettes … in the positive connotation. The rooms sometimes feel like they have multiple things going on, and exist outside of the adventure proper. I’m straining a little in that statement, but they are certainly more … integrated? than most adventures. The bedroom feels like it has bedroom stuff. The kitchen feels like a kitchen, with kitchen stuff encounters. The library feels like a library with library-like stuff encounters. Enough of the rooms have encounters that relate to each other to even put together a little story. It all feels like it makes sense and is not arbitrary. There’s this internal logic.

While walking up the path to the top, you see an ogre in a good mood on a rock eating a mite and pestie. The ogre lair is up top and mites/pesties also lair up top. Further up, some goblins watch the ogre, trying to decide to attack. They also have some friends up top. The ogre, eating another creature, is a hint, and makes sense in the context of the adventure as well as providing some fun, since he doesn’t attack immediately and is eating somebody. It all works together. There’s another example of a ghost who hates her servants, and if she possesses someone will go open a secret door to the basement in order to punish/kill the servants … who just happen to be zombies .. including some child zombies. The rats in the library have chewed books, and pulled in bodies through a large crack in the wall. These are not gonzo or forced, but just all work together easily. That’s refreshing. Gonzo stands out, but making giants rats, or zombies, work in 2017 is not easy. We can debate on if you SHOULD include book monsters in an adventure, but for an adventure that DOES include book monsters, this one does a good job with it. It seems effortlessly constructed.

The writing style is not particularly evocative. At All. ‘Boring’ would be the word I would use. And while the rooms descriptions are not particularly extensive, I do think that they concentrate too much on the useless and trivia instead of creating an evocative impression. The Dining room description is a decent example: “Over two dozen reclining couches dot this two- story-tall room, along with eight square tables. The room opens up to the second level and a minstrel’s gallery is above and to the east. The owners of the Ivory House believed in reclined eating and all meals were served in this fashion.” Not exactly inspiring, and I can make a good case that the last sentence falls in to the “explaining history” category of Sin. Likewise, many comments about things like “this used to have thick iron doors, but they were consumer by a wandering rust monster” … which occurs more than once in the text. This is trivia.

Further, there is an extensive appeal to mechanics in places that I don’t think is warranted, even if we accept this is OSRIC/1E. This occurs most frequently with notes (paragraphs, I should say) that give exceptions for thieves and rangers. “If there is a thief sneaking in the party then blah blah blah bonus/penalty because blah blah blah.” For a cobblestone floor. Likewise rangers get extensive notes in places for tracking efforts. Condensing or trimming these would help keep the product focused. It IS packing almost sixty rooms in to nine pages, so it’s not like it’s the biggest sinner ever, but it does stand out. Maybe more so because of the more ho hum descriptions. This sort of exposition is also found in several creature encounters, with notes on tactics and the like that seem to pad things out more than they should be. The adventure pretext is also light, a dyrad having her wooden cup stolen, or simply “the lure of rumored treasure”, but, whatever, it’s a site-based adventure and those are FAR easier to motivate in to a game than the plot adventures. The magic is all book items with no descriptions, which is very disappointing.

This is a nice adventure. I will sometimes say that adventures are salvageable with a highlighter. This goes a step beyond that. No gonzo. No explosions. No set pieces. Just a solid little site that could use a little edit to make things a little more evocative. It’s also going to be a ROUGH time for Level 1 characters, unless they know what the fuck they are doing. The whole “12-18 ghouls” thing is rough, and easy to stumble in to.

The preview on DriveThrough shows you the ogre and goblin encounters on the path, so you can get a good look at both the positive aspects of the encounter and the relatively lengthy parts of the descriptions. Likewise, on the last page, you can see room 1, the outer wall of the compound. It also shows the nicely integrated nature of the encounters, with tracks and the like, as well as the relatively heavy description length for the same. The preview does a good job of letting you know what to expect.https://www.drivethrurpg.com/product/113206/Advanced-Adventures-28-Redtooth-Ridge?affiliate_id=1892600