The Ruinous Palace of the Metegorgos 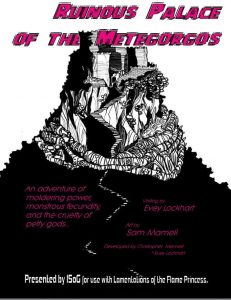 Why Go to the Ruinous Palace? 1. Old Gold to be Stolen from Old Places 2. Rumors of Supernatural Fecundity and Ruination. What wizard would not wish to study such?
3. Nearby communities are hemorrhaging Livestock. The Dragon learns to hunt and gather.
4. A forest Unmolested for centuries… could become a fortune in Timber.

This is a twenty one page adventure with about six encounters, centered around a small ruined structure with a mythic abomination in it. It’s themed after one of those Earth Mother things: a naked woman, full breasts, giving birth to abominations. It has a STRONG mythic vibe going on; this is not your boring Paizo D&D but rather recalls all of the countless years of myth and story that have floated around the world. This adventure probably skews closer to level two or three than level one, and features some mature themed monsters.

This adventure FEELS like you are going someplace DIFFERENT. You journey through a creepy forest, full of creepy sad zombies. The ruins in which the main adventure takes place almost certainly have a massive dragon curled around them, asleep. Both of those, together, help communicate to the party that they are leaving the mundane world of farmers and lords and entering a different kind of world, where the freaky deaky will be found. IE: the transition to The Mythic Underworld, for those of you versed in blog-o-sphere lore. It’s a very effective technique for helping to set a mood.

The forest journey begins the adventure. There is no hook, just the little publisher’s burb up in the first paragraph, to set help up the why’s of the party going there. It’s a creepy, wet, pine forest, with a heavy but sporadic mist. Scattered throughout are the Sad Zombies. Imagine a zombie in a misty pine forest, in the distance, wearing only a mitre hat. Or one sitting on the ground, crying. Or one chained a tree, with the tree having grown around them. There’s not really much to this, other than the atmosphere of the forest and the sad zombie wandering table. Still, the weirdness of the situation, with the atmosphere, is a great way to begin the mood setting. At the end of it you encounter the ruins, which almost certainly has a huge sleeping dragon wrapped around them, with scales of obsidian.

The dragon is 10HD. Just inside the door is a 2HD monster made up of light, only hit by magic, but captured by opaque surfaces … almost a puzzle in monster form. None of the creatures here are book monsters. The dragon with obsidian scales, the light monster, some shit creatures, the daughters of the woman that are half hippo, and the mother herself. The players won’t have any idea what’s up, the creatures are strongly themed but without mountains of words. It FEELS like something out of myth or folklore.

Well, maybe a Guillermo del Toro folklore. Shit monsters and an earth mother monster who gives birth to needle fish to attack you is a little … uh … repulsive? You’ve got some mature themed creatures and effects that are going where other adventures don’t. Like turning your genitals to stone. That section includes this gem: “septicemia kills more murderhobos a year than any other disease.” It all makes sense, in the adventure and doesn’t feel forced or, oh, included just for shock value. Even tangential sexual themes, like in this, are more than a little unusual.

There’s a fair amount of fluff/inspirational text in the adventure, but it’s almost always confined to a page by itself, in LARGE font. More artful than wordy. This is a great way to include this sort of meta-inspiration without clogging up the text that the DM needs to run at the table. Magical treasure is light, at none, with mundane treasure fitting in nicely but lacking really solid sticky descriptions.

But still, a nice decent adventure with a great vibe going on if you can get past the pussy monsters stuff. When you finish, I suspect your players will really think they’ve accomplished something, much in the same way that happens something in good DCC adventures.

10 Responses to The Ruinous Palace of the Metegorgos