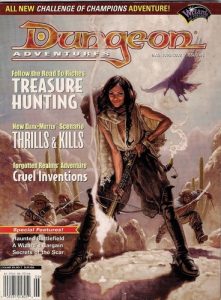 A search for pirate treasure map (and the treasure!) in a spanish/ren type setting. This reminds me a lot of Hoard of the Dragon Queen/Rise, in terms of writing style. There’s this aggressive “overview” and appeal to genericism. Lods and lods of text on history and backstory and little to help the DM run the actual game. Tons of bandits and ½ orc bandits and orc bandits, and a lot of “Pirate Ghost” encounters for the big bads. Most of this is searching for the map and doing quests to get the pieces with the actual treasure locale being mostly glossed over. It’s as if you took a long and rambling and not very good 18th century novel and added stats. Oh. In trying to see if Lance had an ties to Hoard/Rise I see he’s an english professor …

The Frothing Miscreant
By Robert A. Van Buskirk
AD&D
Levels 2-4

Tinker gnomes. The core of this one isn’t bad, but it suffers from the implementation. Evil gnome cleric animats bird skeletons, sticks some fire traps on them, and sends them off to attack ships from his pirate ship. The hook is a fisherman finding the body of one and figuring it out, then contacting the party for a cut of the loot. The investigation is handled in bullet points, which is fairly terse … and nice. What follows is an assault on the gnomes estate. It’s mostly in standard room/key format, which is not the best for something like this. There’s the potential for a large pitched battle, which could be nice, but it’s quite disorganized in how it presents things in and around the estate.

This popular series presents a series of puzzle challenges. It’s very theater of the mind: no magic items or spells for your casters, everything is provided for you in scrolls, etc. Each room is more puzzle than anything else, as you try to figure out how to get past it; that’s how it can be for any level. I’m not a fan of these. I like the concept of open-ended rooms and rooms without traditional encounters/fights/etc, but I prefer a more natural set up instead of the general “room built for one solution” format that the Challenge of Champions series has. I know the series was very popular though, and was one of the few times, I think, that creative thinking was actvly encouraged.

Side-trek … with a maggot golem! Not much to this, a MU in a magic store is helping a brain collector collect brains. A couple of NPC’s to interact with, nice … horror? Set up, I guess. The core concept is worth stealing, but I suspect most of us have already stolen a “backroom of evil” for many shops.

A Head for Business
By J.D. Walker
Alternity Dark*Matter
Level 3

Scene based planes train and automobiles, with sandmen showing up and killing folk and the PC’s investigating “tracking them down” on the figurative and literal railroad. Lots of forced combats, which is never a good sign.

The Trouble with Trillochs
By Peter R. Hopkins
AD&D
Levels 6-9

Side-Trek. This packs three encounter areas, several hooks, and an eleven room necromancer lair in to a few pages. The hooks are solid, and one is generally unrelated to the adventure except as a pretext to get the party into the area. It’s got some decent detail, like a stuffed basilisk and a instructions to turn yourself into a shadow demon! That there’s some nice looking loot! I wouldn’t call this a Go To adventure, but it’s better than the usual stuff in Dungeon.
The lair and environs feel a bit more alien than most, thanks to pech, galeb-dur, and a xag-yi. Not great, but better than the usual fare.

This adventure was built from the Dungeoncraft articles in Dragon magazine. The results are mixed. It’s meant as a beginning campaign adventure. The characters start as prisoners of orcs who force them to dig in a temple. The temple has 45 or so rooms. The map is excellent, showing rubble, light sources, and where there are orc guards (and how many) during the day and night. Combined with this is both a daily timeline of how the orcs gaul the slaves around to dig, and then a longer timeline showing what happens, event wise, over eleven days. There’s also a nice little table of random events that can happen each day. The overall design here is pretty good, and open ended, but it has the usual issues with lengthy text clogging up what the DM needs to run the adventure. Beyond this (and the usual genericism of AD&D) I could also quibble with some important “escape” details being mixed into the adventure text. The orcs with a gambling problem, for example. It probably would have been better to summarize the escape means built in, briefly, in a paragraph around the same place the timelines are enumerated.