Peaks and Valleys: Among the Dwarves 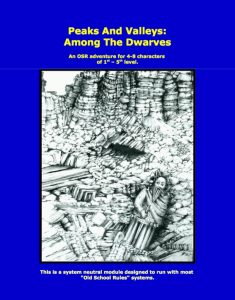 Far to the north, in the Okhan mountains, a great dwarven lord has put out a call for mercenaries from all corners of the world. Are there any who can bring the goblins of the mountains to heel and find the lost vault of legend?

This is an interesting little mountain sandbox that should take characters from level 1 to 5. 155 pages with largish text and a hex crawl with 34 locations makes for an encounter/location about once every three 6-mile wide hex. There’s a decent mix of encounters, several settlements, several sub-plots to get mixed up in and creatures that don’t always attack on sight. It’s little mundane in its use of standard monsters and standard magic items and has a few problems here and there with organization leading to a lack of clarity. Individually I wouldn’t call the encounters too imaginative, but there is a zoomed out campaign thread here that makes no assumptions about how the players will tackle it. It’s a pretty good first effort.

There’s a dwarf hold in a mountain region. It’s relatively new and there’s a human settlement nearby that helps feed the hold. There are a couple of outlying holds. There’s a lot of ancient ruins. There’s a lot of intrigue. The idea is that the dwarf king has spread some rumors about an old mythical treasure vault in order to lure mercenaries and adventurers to the region, figuring they will help take care of some of the monster issues. I think this falls squarely into “Be Careful What You Wish For” territory, knowing the behaviour of the typical murder hobo.There’s a few pages of overview information and wanderers and then the 34 hex encounter begin at about one location per page, with some being several pages if they describe a mini-dungeon.

All politics is local, so goes the saying, and this adventure feels a lot like local politics. The dwarves have a couple of factions. The humans have a couple of factions. There’s an elf faction. There is an evil witch and the kobolds who oppose her as former slaves. There’s bandits in league with some people, monsters and human. There is a monster ‘town’ in addition to several monster lairs. So, lots of factions. And everyone has an opinion about at least one other faction. This is great. It’s a way to generate adventure, spread rumors, get the party into trouble with one group of another … or, rather, let the party get themselves into trouble. At behind and woven into it all is the mystery of rumored treasure vault. The rumors and faction play and little jobs that some of the people have serves to get the party moving and mix up the batch off nitro just waiting for it to reach temperature and explode. The last couple of pages has a decent overview of that explosion. What can happen as you strengthen the dwarf king. What can happen if you strengthen a different dwarf faction. What can happen if the monsters in monstertown get strengthened, and so on. It’s a nice way to provide some context and a future timeline based on the parties general actions.

And yes, you can help the monsters! There are certainly more than a few encounters in which the humanoids are hostile, but there are others in which they don’t immediately attack, or will parley. I love this. There’s no presumed morality or Good Guys in the adventure. The party gets to do what they want. By letting them talk to the monsters you open up a whole new avenue of roleplaying and possibilities. One of the things this adventure does, which I also LUV, is to make the non-hostile monsters targets of the party. Make them non-hostile and set up a situation where the party lusts after something they have. There is more than one encounter like that in this adventure. I’m thinking specifically of a great lizard man lair. Inside it’s an idyllic place … with an OBVIOUS elf tomb in the hatchery and another interesting door in the place where their giant crayfish god lives. They also have some interesting loot displayed prominently. Who wants to level?!?!? You know Gold = XP … This is wonderful. It gives the party an interesting choice that has consequences either way. And there’s not a wrong choice, or a choice where they are punished, but rather just natural consequences to decisions.

It’s got pretty good treasure descriptions. About half the magic items have a description and more than a few mundane objects get an interesting description, like giant python fangs in a trophy case or a silver salt cellar in the shape of a maiden. The treasure descriptions fall a little flat, I think maybe because they are just for mundane book magic items. +1 swords and +2 shields. The added description is a nice touch but a little something more than a mechanical bonus from the book would have been preferred over a nice description. One of the more interesting things found is a journal from a dead wandering person. It can help you decipher which rumors you hear are true or false. That’s a great way to add colour and information to a game in a way that doesn’t just rely on boring old “you find a diary” nonsense.

Some of the encounters presented are quite nice. The lizard men, for example, have a dude outside in a double fur coat. Inside they roll about in the sand and bask in hot springs with their trained giant macaques. The entire lizard man lair is a great example of adding just a little more and getting something more interesting than “3 lizardmen in the room.” The rest of the content and encounters kind of falls of from there. Hmmm, how to say this … the factions and intrigue are great and nicely done, but the encounters are not necessarily the most evocative. They tend toward the generic side of things with the personalities and factions then punching it up to the next level weight class. Without that, and the interconnected nature of the various encounters, this would be far less interesting.

I guess the wandering monster table may be another good example of this. It’s just monsters on a table, and there’s nothing much interesting about it. But then there’s the ‘special’ table. It has great things like wandering elves, abandoned camps with tracks leading away to the nearest encounter hex, and things like that. Not all that good, but generally much better than “2d4 goblins.”

There’s a nice little Blood in the Snow horror encounter which, while interesting, could use some editing for more flavor and organization. It’s not exactly clear which of the three inter-connected mining camps you find first, second, or third, which is important, I think, to the mystery. That’s probably the most obvious example but there are other little organization issues here and there.

This is Pay What You Want at DriveThru. It’s got a good basic outline and the interrelated groups and encounters are something that you don’t usually find in adventure, even in a hex crawl. This isn’t a home run, by any means, but it is a great first effort. A little editing, a little better word choice for more evocative encounters/loot and it would be solidly in my B range. I think this falls into my “If all adventures were this good I wouldn’t have to review adventures to weed out the crap.”

6 Responses to Peaks and Valleys: Among the Dwarves