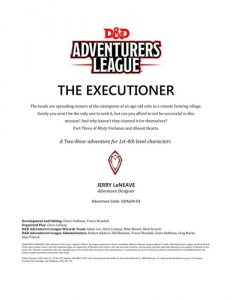 I lied. I’m back to using The Sunday Suck. This is in honor of this adventure, one of the worse I’ve seen.

The locals are spreading rumors of the emergence of an age-old relic in a remote farming village. Surely you won’t be the only one to seek it, but can you afford to not be successful in this mission? And why haven’t they claimed it for themselves?

You know the drill. 31 pages, the first nine of which are (mostly) garbage and the last eleven are reference, leaving about eleven pages for two hours of adventure. Suck it you Adventurer’s League fools! Beg to pay for your weekly abuse from WOTC! Bwahahahahahahahaha!

Hmmm, a little harsh. There is a nice little adventure overview section and an NPC reference in the back reference material. Five of the Seven NPC’s presented are not present in the adventure, which means several of the NPC’s that ARE present in the adventure are not mentioned. The hook is either “you’re already in the village” (from the last adventure) or “mists transport you.” The first is fine while the second continues the long tradition of Not Even Trying. It’s ok, the summary looks like a railroad and the baddie, a wight, is running around town wearing a hat of disguise. Why? Please dear god, why? A wight in a hat of disguise. Why not just make him the archdevil asmodeus in a hat of disguise, or an atrophal or a black pudding in a hat of disguise? What do you want for $3? Spend $2 more and get Maze of the Blue Medusa? Ha! Not official WOTC!

The adventure is in three parts. Part one is to sit in the tavern and listen to rumors. The important points are in bullet form and generally summarized nicely, while the non-bullet information is generally useless and adds little to the adventure. One important point, a way to get the party out in tot he town, IS buried in the main text, and the rumors are not particularly interested. “Bob’s has been selling shit to Lazlo” is the form they are in. IE: all fact based. A little colour never hurt no one and a nice little colorful sentence could have replaced the fact, conveyed the same message, and been far more interesting. In the end the entire point of the adventure, the motivating force for he party, doesn’t actually come through. At all. There’s no real motivation provided.

Part two is to roam over town. Long and boring descriptions are the rule of the day, although to its credit at least one of the encounters allows for a nice bribe to avoid a combat. Oh, the wight in the hat, doing his shopping for the day. If attacked/defeated he gets to make a plot shield escape. “A patch of mist glides in and when it fades then he is gone.” That is a crap ass idea. Plot shields are crap ass to begin with but that one is worse than usual. Wait! Wait! It’s better! Check this shit out! “If at any point the characters begin spending too much time outside without taking direction, or they progressed quicker than anticipated feel free to roll on the random encounters table.” Ha! Just monster attack after monster attack there!

Part three is getting attacked by some undead: two zombies and two ghouls. It wants it to be a big torches & pitchforks and fire mob scene, with undead coming out of a burning house and forest to attack the mob and the party and wounded villagers paying about and so on. It fails miserably at this. There’s not much in this to inspire the DM to run a decent adventure … and four undead hardly match what text there is is trying to convey. Oh, then the mayor shows up and demands a strip search of the party and attacks them. Yeah. Great Adventure.

It’s trying, especially with the bullet points and reference material. But the text is dull and not evocative and the reference material misses the point most of the time. Combine it all with the railroad nature and the UTTER lack of coherence when it comes to providing the DM information, so he can run it for the players, this wins one of my coveted Worst Adventures Of ALL Time awards.

This entry was posted in Adventurers League, Reviews, The Worst EVAR?. Bookmark the permalink.