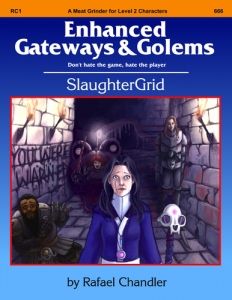 Created by genocidal halflings aeons ago, SlaughterGrid is a strange and gruesome dungeon, avoided by all save the bravest or most foolhardy of adventurers. “Whether is was foolish piety, or raw avarice, or a surfeit of ambition that compelled you to enter SlaughterGrid, it matters not, for you will suffer before you are killed, and no one will remember your name.”

This is a three-level dungeon with a small hex crawl associated with it. It tends towards the Cannibal Corpse side of the gore spectrum. This puts it in good company with Raggi’s Lamentations of the Flame Princess style. The adventure also offers one of the best environments/descriptions I’ve encountered. Room after room, encounter after encounter, the adventure delivers successful room descriptions for the DM to use. On a hit/miss percentage basis, solely on the basis of of the room descriptions, this may be the best described adventure I’ve seen.

I have a much harder time reviewing the better products. I think I gush and don’t do a good job explaining the strengths. This is one of those cases. The adventure has an small nineteen or so hexcrawl associated with it. The descriptions of the rooms and the hexes both share a certain style of writing. From now on I will refer to it as ‘The style everyone should use’, or TSESU. What Chandler does with the descriptions is provide a little adventure. A thing, a hook, and consequences. Every. Single. Time. Taking one of the first hex crawl spaces: there’s a monster that likes/wants/needs some brightly colored cloth. It may attack the party if it sees some. It will also negotiate, especially if they don’t have any, so that the party will bring it some. It’s a monster! It’s a hook! It’s interactive in the way that the game as a whole is generally taken to be. Compare this to weaker hex crawls: “there is a dodo bird here. It is blue.” or maybe “There’s a statue of wizard here. He has a staff.” Note the passive nature of the later and active nature of the former. You can interact with the monster, and not just in a combat oriented way. And that interaction leads to other adventures and goals. The layering of the hooks and goals results in a much more interesting environment.

This same sort of thing is present in most of the dungeon. You find injured orcs, interact with goblins, find weird stuff to play with. Quite a bit of it (QUITE a bit) leads to the players having to make some interesting choices for their characters. The dungeon has factions, the factions provide additional depth, of course. Not everything is a potential ally (or at least neutral), some of the creatures are just dicks, and there are a decent number of the mindless as well to hack away at.

The rooms have a lot going on. Places you can carve out and explore. A weird logic to the dungeon that the players can exploit. Hmmm, more on this. CHandler points out, in the DM introduction, a number of effects that the players can exploit, from a resurrection egg to floating egg sacks. In addition there are, scattered throughout, a couple of things that you can further exploit. Digging out and curing another resurrection egg, or exploiting some of the monsters behaviours … ass some of the other monsters do to gruesome effect. There’s an element of ACTION present it the dungeon that is generally quite rare. Take the old B2/Borderlands. You would go in a room and the orcs would be playing dice. There’s A LOT of that going on … except it’s not dice. It’s eating or skinning a corpse, or something like that.

The treasure here is quite quite good, especially the magic items. A ring that shoots firewalls, named swords, named shields, etc. A lot of them have additional effects. A good example is a shield. There’s a face on the backside. When you use the power, the face changes to show the face is dead. The face changes to someone else. Same thing. Eventually it shows someone the PC knows. And then it shows a party members face. That’s NICE. other magic items self-destruct when used up, and so on. For quite a few the effects are described rather than just mechanically noted, which helps with the visual imagery and DM rulings. The mundane treasure tends to be pretty good also. Not just a crown but a gold crown, with rubies made from giants, and so on.

Chandler clearly knows what elements make up a good adventure. The room/encounter descriptions provide the exact sort of situations that are just waiting for a PC to wade into and stir up. And now for the other …

For all the dynamic room situations encountered, the wandering monsters are just a static little table. They could use a quick additional table to give them something to do while wandering. The new monsters are not particular well described. Compared to the Teratic Tome, they fall far short. I expected to see nice evocative descriptions that would spring to life in my mind. Instead it’s mostly mechanics. I appreciate the mechanics, but I also want a good evocative description. There’s also a kind of … lack of organization? that comes through. This is mostly a problem with the room descriptions. “Bob can tell you secrets of the dungeon.” or “Mary can tell you about the monsters on level 3.” Well … nice, but that requires I go look up the data to convey to the players. Just a couple of extra sentences and that problem would not exist.

Those sentences can come from the unnecessary text present in some area. “There’s a secret door in room that leads to room 20.” No shit, I see it on the map. “Study of the area may reveal a secret door. Normal odds.” Again, that’s quite the revelation. Also, you players roll a d20 to hit in D&D. Shall we mention that as well? There’s not an overwhelming amount of this present but when it shows up it’s VERY noticeable and annoying. Maybe because there’s so much focus present in the rest of the descriptions? What IS valuable is noting what the players can see/hear down some of corridors. Raucous laughter, glowing pink lights and so on. I’ve often thought about incorporating this sort of thing on a map but embedding it in the room descriptions work nice also. What, from this room, can you tell me about the corridor/next room? Dishes Done!

In the finest OSR traditions, Chandler presents some interesting house rules up front. Wandering monster rolls that increase the probability as you go forward. Group efforts to breaking things down. Int skills for monsters being tricked by players, and so on. They are simple and would seem to work fine.

It’s got a bit more gore/shock value than the usual adventure. I’m fine with that. If every adventure published were as high of quality as this one then I wouldn’t need to review adventures. This is really an excellent piece of work. I really can’t say it enough and, again, I don’t think I’ve done a decent job conveying just how good the rooms and magic items are. If I gave number grades then I’d give this a 10/10.