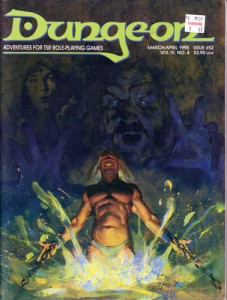 This review is not up to my usual standards. This issue really weighed on me. “Jesus fucking Christ how many pages are left?” is not something you want to find yourself saying while reading something you’ve bought for fun.

This “adventure” is a riff on The Tempest. In that vein it’s organized in Acts and Scenes. IE: a railroad hell hole with very little free will. While I would not want to discourage folks from trying new things it remains that this thing fails in the core purpose: adventure. I’m using that word in a loaded sense that fits in with my core conceit. It’s clear that many/most adventures fall into these event of scene-based encounters. By railroading the players it fails to provide the adventure that is promised, instead turning it into a simple “roll the dice” game. Mike Selinker, I respond to your Shakespeare riff with a riff of my own: I got this job in a piss factory inspecting pipe.

This is a simple little 2-page side-trek with a grell. For those of you unaware, side-treks are where dungeon magazine takes what should be a paragraph encounter in an adventure and expands it to two pages. The villagers want you to kill an unknown monster. It’s grell,and lives in a little cave up on a hill. It will push some boulders down on you. *sigh* I like the map though. It’s a nice little encounters map with a road, stream, elevation, boulders, etc. It reminds me a bit of some of the smaller Harn maps … and that’s a compliment by the way.

Humor in D&D is a tough thing. Best to take it as it comes instead of forcing it. This adventure forces it. Some dwarves want you to find their brother/kill the monsters in a mine. It’s two goblins with a ring of invisibility and a bag of tricks. Lots of hilarity ensues. All of the room descriptions are NICE and long, with lots of read-aloud and DM information. Long even by Dungeon standards. There is one nice bit though: the dwarves have a boot with their brothers foot in it. Nice imagery there.

This reads like a Grimtooth’s room. Two ogres summon a roc, pick up a PC, and drop them into a net in a ruined tower. It ratchets down through a hole in the floor to a room with a giant scorpion, pit & the pendulum style. The other players get to rescue them. It’s timed, so the longer it takes for everyone else to get to the tower them the closer the captured PC is to their fate. I have no idea how this shit gets in to the magazine. Were the submissions really so poor?

This is a sequel to “Lady of the Mists”. Many people like Lady of the Mists. This adventure has very little to do with it. This is an adventure in a castle that has been overrun. It’s got quite a few levels, and at 65-ish rooms its quite a bit more substantial than most Dungeon adventures. While the wizards away their Mirror of Life Stealing gets broken and everyone inside freed. The prisoners fight a bit and massacre most of the servants in the castle. Two who escaped plead with you to free the castle, look for their friends, etc. There are six or so of the prisoners left in the castle, and a lot of dead servants and few more hiding, etc. The adventure recognizes that it is, essentially, a social one and takes advantage of that. The former prisoners have several factions and various motivations. Most of these revolve around “getting their stuff back” and “revenge on the wizard.” As such they are generally willing to talk, unless they suspect the characters are in the service of the wizard. There’s some looting going on with the former servants, some hiding, some random demon evil-doing, and so on as well. This layering of things going on really gives the thing a life that most adventures don’t have. The room descriptions are crap and overdone, as was the style at the time. There could be more advice on the former prisoners, and the faction element, timeline of events, could be played up more. S greatly simplified map with the room names written on it, the NPC descriptions/stats, and about a page of text would greatly reduce the bullshit and make this one a solid C or B.

This is just an NPC, really, for a Ravenloft game. It’s a ghost killed when he was laughing. Two pages.