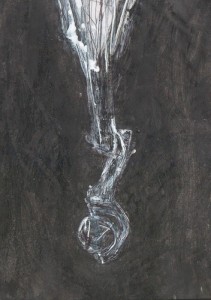 The adventure takes players from a town devastated by an unexpected flood, through a drowned land where nature is turned upside down and desperate families cling to the roofs of their ruined homes, hiding from the monstrous products of a disordered world, through the strange tomb of an ancient race, to a profundal zone, hidden for millennia and now exposed, and finally to the Observatory itself, an eerie abandoned treasure palace, where they will encounter a pale and unexpected terror which will seek to claim their lives.

It’s been a year, time for a signal boost. Go buy this. What.The.Fuck did I just read! Go Buy this. You see, this is what commitment to a vision results in. Go buy this. Shit, now I have to think about how to revise my reviewing model to account for the disruption of my core ideas. Go Buy this. You are a fool if you are at all interested in any version of D&D, Pathfinder, etc and do not own this. You could probably fit it into Conspiracy X, CoC, or any of a dozen other genres as well. You bought it, right? No. I’ll wait. Go buy it. Some people deserve to make a good living from their work. Stewart is one of those. He marries creativity with purpose to a degree that makes it seem platonic.

The adventure has a couple of overland journeys, a couple of complexes/dungeons, and a nice hook/Transition To The Mythic World section. It’s light on mechanics and packed full of imagery, ideas, and gameable content. It channels the vibe that Raggi’s Lamentations adventures try to reach. There’s this sadness and … inevitability present in the adventure that just kind of grows and grows. There’s a river journey, so comparisons to Heart of Darkness/Apocalypse Now are inevitable. There’s this same sort of Passing By Weird Shit Should We Stop thing going on, combined with a melancholy.

The adventure abruptly starts. Just a few sentences and no real background. Everything you learn about what’s going on is revealed through the use of the encounters. This works SO well. A picture is slowly built up in your head of what’s going on and how it fits together. But the picture is incomplete. Blackness hangs around the edges. This emptiness demands to be filled and your brain works feverishly to fill in the gaps. By the designer providing less information, and working it in, you get a better picture in your mind of what’s going on. There are limits to this, of course. It works well for background and history and not so much in other areas. But it’s used here for great effect. The adventure alludes to things. It implies. It leaves gaps present that you subconsciously fill in yourself. I don’t want to imply in ANY way that the adventure is incomplete. It’s not. The information missing/alluded/implied is not critical information in any way. It’s the fluff that builds a world.

This adventure does what SlaughterGrid did so well: provide evocative encounters. There’s thing DM’s do when creating an adventure that involves minimal keying. Just jotting down a dozen or so separate lines on a paper. “Room 4. Dry well. 4 Ghouls” The home DM can do this. They created the adventure. That text prompts their minds to remember what “Dry well. 4 Ghouls.” means. It’s a shorthand reference to something deeper and more complex in the DM’s head. This minimal keying is terrible in published adventures. The people reading it have no idea what what “Dry Well. 4 Ghouls” meant to the designer. Many designers write up boring descriptions, or resort to a lot of text to try and describe the vision. What’s really needed though is a short burst of flavor. What’s the key to this encounter? By just providing that much, and doing in an evocative way, the DM’s head can, once again, fill in the rest. That’s what this adventure does, over and over again.

“A petty cleric, clutching a log, shouts “All is Lost!” Seltor Tem is the only survivor of his village. He has a key to his church. He will drown soon.

Perfect. P.E.R.F.E.C.T. This is exactly the sort of thing D&D encounters need more of. It’s memorable. It’s tersely described. It’s full of potential energy. As soon as you read this your brain starts to fill in the picture and the gaps. Stewart does this over and over again in this adventure. It’s wonderful and a joy to encounter. This is exactly the sort of descriptions that I’m looking for to riff off of.

I could gush, over and over again, about many aspects of the adventure. The beginning section has some hooks. I guess they are hooks. There is/was this mem in the OSR about the Mythic Underworld. The players needed to cross over some threshold during their journey to the adventure proper. They needed to understand that Things Are Different Now when they entered the dungeon. I think that’s what’s going on in the entire “hook” section of the adventure. You learn you’re not in Kansas anymore. Things are put in motion. Events happen that have repercussions elsewhere in the adventure. There’s a simple time and event mechanism going on that sets the mood and provides that crossing over. From there it’s up the river to find Kurtz, with ever more weird things being encountered. It’s Wonderful how it builds.

I wish I had the words to relate how good the encounters are. As you journey further into the adventure things get more and removed from the traditional Tolkein tropes. It takes the bizarre that was only hinted at, in things like Vault of Drow, and provides full glimpses in to it. Nowhere have the drow seemed more Drow-like than in this adventure. Magic and mundane items are unique and wonderful.

After gushing for two pages I’ll also feel compelled to hand out some lumps. Most importantly: the maps. Most of them are generally ok. I might recommend making the numbers a little clearer on them, by typing them or something. I promise it won’t impact the aesthetics much and the old bifocal crowd (like me) will appreciate it. The map has to be functional. It MUST be. You can also communicate with it creatively but it must fulfill the core purpose. The DCO map, proper, fails most at this. The upper left, the entire right, the upper middle section … Stewart or Scrap need to redraw that fucking thing and publish it. I would also mention two improvements with the NPC group. It’s quite nice they were included. Just a TAD more motivation might have been nice, but I can deal with that. What they really need is a 1-page summary. 1 page with the stats and a brief personality reminder for each. Everyone who runs this is going to have to create that in order to use it. You should have provided it. The full descriptions are good and should remain, the reference sheet is just a prompter to remember the bits burned in to your brain.

You bought it, right?