Scourge of the Demon Wolf 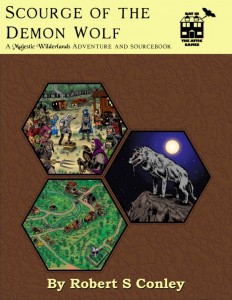 by Rob Conley
for Bat in the Attic Games
Swords & Wizardry

Three died. They were mauled beyond recognition. The Baron sent his huntsmen to kill the beasts and for a fortnight they tramped across the countryside. Between their whoring and drinking they killed twelve wolves, parading their skins through the village. They were hung on poles as trophies of victory. Then the huntsmen left, the beasts slain, the village saved… so we thought.

As the fields turned golden under the summer sun the killings began again. Four more died. Then the Baron’s man, the bailiff, was killed on the high meadow in sight of Mitra’s Temple. His screams could be heard well into the village. He was only identified after we reassembled the pieces.

With the priest’s help I wrote a report to our liege, the Baron of Westtower. My report ended with,
There will be no harvest until the best is slain the killings stopped.

On Snap! Who wants to earn some cash by helping the Baron puts some villager heads on pikes?!! That’s one possible hook in this adventure setting. It describes a small portion of one of the Wilderlands hexes and its recent goings-on. It’s full of villages, plots, people, factions and, of course, the Demon Wolf. It’s long for what it is but it does provide an excellent open-play area for the party to get in to trouble. It’s set in a locations closer to Harn/Ars Magica than it is Forgotten Realms or even Greyhawk. A grittier more realistic location/adventure but not quite down in filth-caked villager category.

This adventure has a lot of factions in it and because of that a lot of people and because of that it has a lot of AWESOME in it. Let’s see, you have the Baron and his men, the regions bandits, a local gypsy group, a local mage guild, a village with at least two factions in it. In to this fragile ecosystem Rob throws a Demon Wolf. This puts everyone on edge and starts the factions agitating. Which is EXACTLY how this sort of thing should go. This is the perfect opportunity for the party to restore order through roleplaying in order to achieve their ends. Or push the groups over the edge so they go at each other, supporting one faction or another. ALL of the possible outcomes will have repercussions for how people treat the party in the future. Making friends and making enemies and deciding who falls in to which group … or managing a more complicated outcome … that’s the heart of a city/village adventure and the designer sets things up PERFECTLY for this outcome to occur. You’ve got the misguided priest who wants to do good and is set in his ways. You’ve got groups of layabout villagers. The old guy who can’t work. Love triangles. (Multiple, in multiple places.) Lazy folks and excited folk and religious folk and stupid folk. It’s a great little snapshot of how peoples lives mingle with others and how that creates everyday drama. That get’s out of hand once the party dumps gas on it. 🙂

The basics of the hooks are all in the teaser text. There’s a half-dozen or so ways mentioned to implement these hooks but my favorites are probably the whole “go get my harvest!” one from the Baron, and it’s implied heads on pikes, or the one the thieves guild can provide: “Someone is robbing people. Go get our cut of it!” Both of these provide for more direction and authority than the “be a hero” hooks and provide some pretty good roleplaying opportunities. They also fall in to the “do a mission for me” nonsense, but at least the missions are fun in this case. 🙂

There’s no railroad here, just possibilities. Pushing one faction over the edge or leaving another one alone will probably cause those people to act a certain way. Some of those repercussions are suggested, others spring to mind while reading the text. The only thing that’s really for certain is that the wolves are going to keep eating people until they are stopped. I can’t speak highly enough of the way the setting is presented; it’s just a description of places and how they will react to certain events or information. There’s a small timeline, mostly around the wolves, and then there’s a brief description of how the various parts of the setting work together to describe an adventure. I’m making it sound more involved then it is. In reality there are seventeen or so locations described along with a brief text on how they work together. These sections tend to be with NPC’s; villagers, guards, etc, and maybe an investigation of a site or two, although these are really deemphasized. This is a social adventure, the way most adventures should be. The Demon Wolf and his buddied running around killing people. Bandits run around banditing and taking advantage of the demon wolf antics. Gypsies getting blamed for things. Villagers technically in rebellion. Buildings full of bodies. Arcane sites full of gruesome clues. EVentually the party will piece together things or just get attacked by the wolf, and the adventure will come to the end. The party will be rewarded with alliances, new henchemen, friendly places to visit, maybe land grants, a bit of loot. Some coinage, trade goods, and maybe some scrolls and ‘Viz’ the magic item unique to this setting which lets you cast a spell without forgetting it. I particularly like how the viz is worked in; players always want to chop up monsters to sell to this time the body parts of the monster provides arcane power through the eyes and canines. That’s a pretty nice little detail. It’s also indicative of the entire adventure. Things make sense in this adventure. People react the way you might think they do. There’s no stretching or “everyone ignored the evil forces massing at the black tower” sort of things going on. It makes sense in a simple way, not a convoluted way. It’s amazing how few adventures do this.

The adventure is only the first half of the book. The second half is given over to in-depth descriptions of the region and very detailed descriptions of a couple of locations, including a village and a mages guildhall. “Very detailed” as in “every villager and apprentice is given a couple of sentences of description.” This is more sourcebook and idea generator. It provides A LOT of additional detail that could be used in running the adventure or in expanding on the region further. Most of it is just interpersonal stuff, which I’m always happy to see, but the region proper could have used a few more sites or events to expand on. “Monsters are in the mountains” are as close as this gets to expanding the adventure sites section. Rumors of forgotten shrines or distant memories of ancient places are few & far between. The village and guide hall are both one of the best supplement/locale descriptions you will find and would make a great starting location for a group … except for the demon wolf thing which it probably beyond most starting parties ability to handle.

This is a great supplement. The writing could be a bit terser and the major locations could probably use one-page summaries of the people and their interactions, but otherwise it’s a great setting and adventure.

4 Responses to Scourge of the Demon Wolf