Footprints #10 – Death from Above! 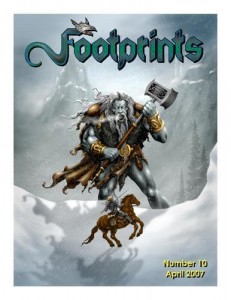 A journey through the most boring fantastic location ever described. Five lame rooms. A two page write-up of the last room that manages to communicate nothing. No, hang on, this is supposed to be the abstract. It’s an adventure through a cloud giants island and castle. It has boring treasure, boring magic, boring rooms and boring outcomes. It is not wondrous. It is boring and lame.

Every get the feeling you’ve been cheated? I do, all the time. Almost every day. I blame it on my midwestern naiveté. Everything is wondrous and new and full of whimsy and just absolutely dreamy! And then I read the adventure.

Why rolling grey clouds? Why barren featureless rooms? Why not a byzantine vision of the future, or some kind of fusion between art deco and the caliphate? Cloud giants wearing turbans and majestic robes and great piles of cushions for the party to hide in and use in combat! The smells of exotic spices in the air and rare woods burned … to cover up the smells of the people they have artfully tortured and placed around their villa for decoration? THAT would be cool! THAT would be interesting. “The walls, floor, and ceiling are made up of grey clouds” is not interesting. It is boring. So are giant 2′ doors. Not interesting. It’s the floating cloud castle of a pair of super duper evil giant brothers. DO. SOMETHING. INTERESTING. Instead we get the lame and boring same-old same-old. Did the designer even try? Did they literally just put down the bare minimum of effort? No, obviously not. How can I tell? Because the fucking entries are about 90 gazillion paragraphs each. It’s almost a 3E supplement level of description. It’s a free product dude, so I’m guessing no one was paid by word, so … yeah …

Winter wolf room. The door is cold. The entire room description could have been replaced with “5 winter wolves” on the map. Instead we get four or five paragraphs. It tells us the room is 50’x100′. *sigh* As with most bad encounters the ‘guards’ of the fortress do not pursue. The ice troll room is 80’x80′, according to the room description, repeating quite nicely what the map tells us. Pad much? It has 20 ice trolls in it and is their barracks! They each get little apartments, presumably with beds and footlockers and the like. Ooo, and they have a frozen larder with body parts with signs of gnawing. That’s it. That’s the description for the larder. Come on, that IS the minimum. Where’s the magic in that description? And a standard barracks? Really? For ice trolls? In a cloud giants castle? Look, I want full on byzantium or caliphate ice troll guards or I want them to be like half frozen in to womb like things in the walls, floors and ceilings, some kind of alien nest thing. I don’t want yet another boring old barracks. LAME. The two cloud giant brothers? If the party doesn’t immediately head in to the torture chamber they flip the table they are feasting at and hunker down behind it. This. This is what malign evil intelligence has become. Two guys hiding behind a table waiting to die. If this was an emo art house film then it would make sense, especially given the vegetarian and oven connotations that the adventure has. But it’s not an art house film. It’s supposed to be fantastic. It is not. For example, the keep is said to have a large amount of non-magical and nonvaluable items in it. None described. In fact, the description for the giants living quarters are terse and boring, being just standard “they each have a bed and a trunk” kind of description. The treasure? Jade armband. Gold torque. Platinum circlet. 11 gems each worth less than 100gp. Two potions from the book. A wand from the book. A broadsword of dancing. A silver dinner service for two. These are contents of the floating castle that are worth mentioning. Nothing fantastic. Nothing wonderful. Nothing exotic or full of imagination. At least there’s a flying cloud castle, right? It can’t be controlled by the players. Not even if the giants are charmed or threatened with death. They will not guide it. L.A.M.E.

They could have just printed the Cloud Giant entry from the Monster Manuel and have been done with it.

2 Responses to Footprints #10 – Death from Above!