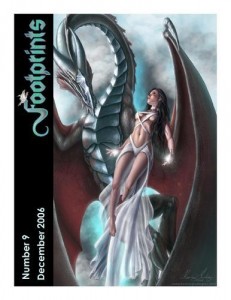 This is a short adventure with a couple of sites in a ruined city and a short little linear tomb with a couple of encounters. The theme here is something non-standard, or twisted a bit from standard fantasy. It does a good at this by using a kind of Oriental Adventures flavor that has been transported to standard D&D-land. Another decent little site for a hex crawl.

There’s not much of a useful background here. Just a page or so of vague background flavor. I believe it tries to evoke a kind of jungle-encroached asian city with it’s vine twisted ruins. In fact, if you keep that in mind while reading it helps make more sense. In this case a little art could have perhaps helped set the scene and flavor better. In any event there’s enough background here to place the ruins in play and sprinkle a few rumors about. The city ruins only have five or so locations with one of them expanded to a small linear tomb/vault dungeon with a few rooms in it. The focus of the above ground area is going to be avoiding the devil moth.

This is a wonderful little wandering monster/inhabitant of the ruins and the designer does a good job with it, although it takes nearly a page to describe. A giant moth flies around and it’s shadow does level drains. Oh, and it’s shadow can also detach and attack separately. There’s more to it but even that little should get you going. Playing running through the vine-crusted ruins screaming while trying to avoid the moths shadow … that’s fun But then them freaking out when the shadow detaches … that’s PRICELESS. This encounter alone is worth stealing.

The five other ruined city encounters are interesting and freaky enough to warrant taking a look at. Sunken and buried amphitheaters, and murky sinkholes covered with much hiding muddy ruins beneath … filled with yellow musk… Thee’s a kind of erie otherworldly feeling conveyed by the encounters. I’m sure this is exactly the sort of feeling that the designer was trying to convey. It’s rare enough that happens but to also have it be GOOD is a significant accomplishment. Turcotte is a decent designer, even in these earlier examples of his work. He does a VERY good job with his monsters and their descriptions, usually their nature tersely and very evocatively. His room descriptions drag out to quite some length, which I generally find hard to wade through to find pertinent information, but they DO convey a sense of the room much better than the massive blocks of generic text that make up most long descriptions. He does a decent job with the mundane treasures, such as ceremonial pipes inlaid with mother-of-pearl and coral. I like the extra detail provided and richness of the history conveyed. The magical items are a bit of a let down though. They tend to be just plain book items. The concept of the adventure is to convey a strange alien, yet human, culture and the magical items would have been a great way to do that. ‘The Ancestors’ are emphasized quite a few times in the adventure; that would have been an excellent opportunity to provide some new items.

One area of the city is expanded upon, a kind of lost treasure vault that is inspired y the terra cotta warriors. This is laid out as a simple seven room or so linear tomb. I suspect this is the actual focus of the adventure, but also the weakest part, IMHO. There’s a classic ball trap, and I’m a sucked for the classics, but with a single exception (inspired by Big Trouble in Little China?) the encounters don’t feel as … culturally different .. as the ones in the city ruins. There’s a whole lot of ‘if you touch it the ancestors get pissed and send guardians to mess you up’ kind of encounters. This is an alias for the far better known: monsters jump out of stasis and attack!  I have no doubt that statues and undead get boring at times and that monster encounters in tombs/abandoned places can therefore be hard to justify. Stasis/summonings are not the way to go. In fact, the BTiLC encounter with the tireless vizier is a good example of mixing things up. The monsters themselves could use a bit of his beefing up also; they are missing his usual magic for describing them. The weirdest part of this is the end, the terra cotta warriors. They are extensively described. EXTENSIVELY. And yet it’s clear that they can’t be activated. I guess this is to keep a major item out of the parties hands unless the DM wants them to have it … and to expand play to go get the magic item required to activate the army? But then why spend so much real estate describing the army in such detail? Maybe it’s a callback to the real terra cotta warriors? I don’t know, but it seems really out of place.

Anyway; the ruins are worth stealing for a hex crawl location, at a minimum.