The Red Demon in the Vile Fens 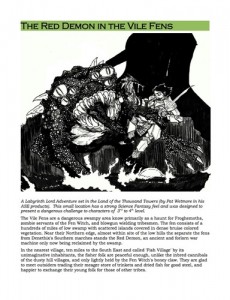 This is a nice little lair dungeon with a fair share of ancient death awaiting visitors. The stetting is a weird science-fantasy and the adventure an exploration of an ancient giant battle tank. It would make a decent hex crawl encounter for gonzo or post-apoc settings.

There is just enough background information provided to let a decent DM construct a decent little village encounter. ‘Fish Village’, in the clutches of the Fen Witch, chiefs elder brother disappeared in the Red Demon when they were younger, villagers like outsiders. Just the barest outline presented in just a paragraph or two but more than enough to run with and build a nice little encounter. In fact, if you’re not building a full fledged village to interact with then I’d suggest that the amount and depth of detail provided in this description is a perfect length. Either I want a developed village or a decent and shot flavor idea for a village, and this adventure does that.

The map has a vertical/tower feel to it. A central shaft system with a couple of chambers off of each level and some hatch doors sometimes between rooms. It’s a decent bit of variety to the usual tower exploration. The extra bit of flavor goes a decent ways in helping make this feel different and fresh. There’s also a decent variety in the environment, from control rooms to wrecked machinery to flooded levels. The whole map/environment thing does a decent job of conveying an ancient wrecked war machine, which is exactly what it is. I’m pretty sure its communicated in such a way as to help the DM run it. There are no wanderers, except perhaps the main creature who has a random chance of appearing in certain rooms.

The keyed areas are … oh, let’s say wordy. They are arranged as each keyed room having several paragraphs describing what’s going on in it. There’s quite a bit of descriptive text mixed with various entrances and exits described. This is supplemented by a game mechanic here and there (STR-10 to open a door, etc) The text is nice and descriptive and paints a decent picture, if a little long in places. You’re going to need a highlighter or do something else in order to condense the room down for quick reference during play. The various chambers have a decent mix of traps, creatures, and weird things to play with in them. I especially like the random table for opening fuel jars; very cute and probably deadly. The various environments do a decent job of mixing up the locations and action and the couple of monster and trap encounters don’t feel arbitrary at all. They feel like they fit in, and given that this is an ancient battle tank that’s a decent accomplishment. No generic old “the skeleton animates and attacks” to be found here! The old ammunition is set up like a trap and it should be obvious to any players who is paying attention. Players being what they are though they are sure to mess with it and suffer from the effects of the moldy and decaying stuff. And when it bites them in their asses they’ll know exactly what they did, groan, and should admit their own stupidity instead of blaming the DM for being arbitrary.

The new monsters are pretty good and varied and nicely horrific, with new powers and abilities to freak the players out. The treasure also fits in well: who wants to play meth-addict and strip the gold and silver wires out of the circuitry, or melt down the boards for some loot, or plunder the silver bearings?! I Do! I Do! I’ll also take that shotgun, laser rifle, and nifty little boarding shield. No generic +1 swords here! Admittedly the guns could get a little more description but they don’t suffer as much from ‘boring magic item syndrome.’

Totally worth it to pick up and put in your bag of DM tricks.

2 Responses to The Red Demon in the Vile Fens