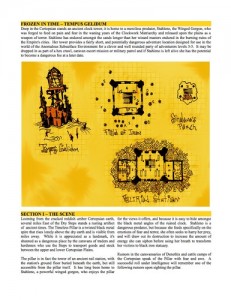 This is a small and well-done lair dungeon for an ASE-like environment. It’s short, just 11 rooms or so, and quite simple at its core. It does Lair Dungeon well though, with an evocative environment, nice combats, good treasure … pretty much a perfect example of the content that should go in to a good lair encounter. Some editing might help the actual text be a bit clearer.

A lot of adventure modules revolve around lair dungeons and most lair dungeons suck. They generally amount to just four or five cave rooms and a generic monster in it. This adventure ain’t that. This one has a great little environment with a monster that fits in with it perfectly. The adventure revolves around an old clock tower sticking out of the desert wastes with a ruined building half-buried under it. Cool! The “giant frozen clock face” is a nice trope. When you combine it with the “ruined steampunk train station” that it’s a part of then you have something that will be immediately recognizable to your players. There’s power in that; in a just a couple of short words you’ve been able to describe the environment around them and bring the place to life. That’s REALLY nice. The brief sketch helps cement things quite a bit also; a really nice combination of “one sentence description” and “evocative artwork.” There’s some background that goes with the setting that helps also: traders use the site as landmark when making their way through the wastes, but avoid it for the ill omens/rumors. Nice! This is supplemented by a pretty nice rumor table for The Timeless Pillar. The rumor table is pretty sweet, but you should read through it AFTER checking out the adventure; it makes more sense then.

The map comes in two small parts: an area map around the clock tower and a brief 11 entry interior map. The exterior portion really just details the ground floor and a statue field around the clock tower. The statues are iron … this should give the players pause and is a nice bit of hint. The maps are otherwise pretty simple, just a couple of rooms connected together by a hall. The three-level nature of the place is interesting through. Ground floor, clock tower top, and below-ground interior all seem to work together pretty well to give the impression of a single environment rather than three separate levels. It happens pretty seamlessly (though the below ground is a little more “disconnected” and the lair feels like a single place. The wanderers are pretty good .. and not all focused on eating the party. Some of them are a bit of ‘dragon flyover’ type encounters with the main enemy while others are a decent bit of encounter by themselves. In particular I like the grave of unquiet dead erupting from the ground as skeletons … which can totally be avoided by the party. In fact, I REALLY like the wanderers; they fit in very well with the environment and the main enemy. A good example of how to work a wanderer table to enhance the main adventure.

The encounters are pretty good also. Each rooms gets a small description section that highlights the lighting, odors, and sounds, and then a small section with some more detailed descriptions of what’s in the room. Each one also has a description of how the monsters use it for combat, how they fall back, where the come from, and so on. It’s a pretty decent environment. The traps are a combination of things the lair monster has set up and some environmental hazards occurring naturally. They tend to make sense in the environment and should have the players saying “Of course!” after they spring them … and that’s the sign of a good trap. The whole environment feels like a single place rather than a collection of rooms. You’re probably going to have to read it several times to make sure you can run it that way, but that’s a small price to pay.

The monsters and treasure are very well done. The main enemy to encounter is an iron statues that can breathe gas that rusts metal under certain circumstances. It’s implied that these guys are under control of the main enemy: a clockwork Gorgon. It’s the perfect kind of enemy for an abandoned clock tower/railstation in the desert wastes. It fits perfectly … up to and including the iron instead of stone statues. This is a really nice tailoring of the monster to the setting … or setting to the monster, whichever it is. It’s not often this happens. The treasures are great also. A lifetime of raiding caravans has left a huge ruined pile of stuff that needs to be dug through and it full of unique goodies. Ebony boxes with dried aphrodisiacs, hides, enameled red armor, silks, cash, astronomical orbs .. .a HUGE amount of unique little items that feels in place with the setting and provides a wonderful assortment of goodies that the players may be loathe to part with, cash or not. I’m really impressed with it. The magic items are totally non-standard as well.

The whole thing, from the monsters to the loot to the magic to the background to the setting, to the art and colorful layout, all fit together to create a wonderful little environment. I may be reading more in to it then I should but right now it’s hard for me to think of a module environment that ‘works together’ better than this one.