The Prison of the Hated Pretender 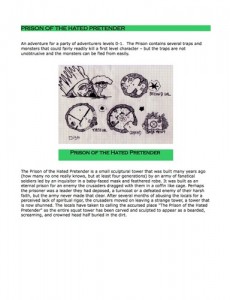 Fuck it. I belatedly declare this to be DUNGEON OF SIGNS week.

This is a small ten room lair dungeon set inside a giant statue head. It feels like a slow burn and a build-up. A good, non-standard one that’s a little wordy but does a good job conveying the ‘feel’ through the extra verbosity. It’s got a good vanilla setting that appears to be standard fantasy but it doesn’t just pull stuff out of books. That extra fluff makes it. It would make a great introductory adventure’ for a group. In fact, it may be the best introductory product I’ve seen. It can also scale well and would make great hex crawl location.

The map for this a classic trope: a giant statue head with crown leaning in the ground, mouth agape and waiting for someone to enter. ZARDOZ? Skull Mountain? Argonath? Its a pretty sweet trope and the map illustration does a wonderful job instantly conveying the setting. Rumor table? Why Yes, please. How about “What the Scabrous Yokels in that village of broken down huts are saying.” That is a seriously great rumor table title. You don’t need a village description after that title. I can run a pretty decent village out of just that description. These sorts of flavor inspirations are exactly the kind of thing I’m looking for in a published adventure. I need some core seed of an idea that I can take and run with … and that title does it for me. There might be, like, two of three more sentences in the background that can also contribute to a nearby village but the core … the core is in that one sentence. Yeah yeah ,the actual rumor table is decent also. The background information/history lesson is terse and contained in one paragraph. It’s descriptive enough to get a DM going but leaves lots to the imagination, which is exactly what a description should do. The map/head has three entrances: through the mouth at ground level, climb a tree and go in through an eye socket, or toss up a rope to the crown. That’s great, especially when combined with “you see a whole lots of shadowy figures moving just beyond, in the darkness past the mouth.” Eeek! Let’s find another way in! The rest of the map is pretty simple, just a couple of rooms per level with a staircase and a trapdoor. There are now wanderers, per se, but there is a percentage chance that certain creatures will be in certain chambers, one of which is nigh infinite in quantity.

I mentioned a “slow burn” earlier. The dungeon is a prison purpose-built to house a deposed tyrant. A dead-ish one. A pathetic one; think Smeagol as his most pathetic, but worse. And guarded by the shades of his dead victims. Ouch! The encounters tend to convey this. His victims, his pathetic nature, his former stature, etc. The encounters tend to have a room with some kind of background/history lesson in them and also a random chance of some creatures being present, either The Hated Pretender or his shade guilt-torturers. Frescoes showing his atrocities that he’s defaced … but he still avoids this room because of the way they make him feel. A real magical ward in the entrance chamber with shadowy figures just beyond who cant pass. A pumpkin surrounded by fake magical wards, an object of desire by THP. The bones of small creatures that THP kills when he can catch them. You get a very real sense that that both the dude was bad and that he’s currently a pathetic wretch. This work because YOU CAN TALK TO HIM! Yeah, he’s batshit and he gets REAL upset in certain rooms, like the Pumpkin one, but you can also give him a piece of pie to win his “friendship.” Woah! WTF?!?! An adventure that has a complex bad guy, makes no judgement about how the party will interact with him, and maybe even leaves an avenue open to the party to interact with him in the future?! !!KrAzY!! Crazy cool, that is. There’s a trap or two and a few interesting things to play with, enough to add some variety.

There are only two monsters: THP and the Shades. The shades can some in a variety of cosmetic appearances but all have the same stats and abilities with slightly different flavor text. Enough to keep things interesting. I love the fact that these undead are so totally non-standard and yet make perfect sense for the way in which they are encountered. These are not just throw-away undead monsters, they have a meaning. The same with THP, although most of his flavor comes from his personality rather than his abilities. The party is going to be freaking when they find these guys! The non-magical treasure is pretty good: gold-inlayed mace, valuable screws, etc, and it fits in well for a “looted prison/tomb” type adventure. The magical treasure consists of gleaming silvered +1 scale mail and some rubies that heal when sprinkled with blood. I’d say those are great items!

As an introductory adventure this is great. The setting is a classic one. The monsters are wonderfully different. And there are hooks and mysteries. WONDERFUL hooks and mysteries. There’s an oracular device inside that give a vision of the future, perfect for setting up a campaign. And a treasure map to keep things going for a second or third session. There is some graffiti inside that says “I NOT KNEEL NOR BOW!” Woah!! Are we SURE that Mr. Pretender is the bad guy here? The adventure does a great job of setting things up for a DM to expand on; providing those throw-off phrases that imply mystery and adventure. One upon a time The Scarlet Brotherhood were just such a thing. A phase mentioned in passing in another book. The mind leaps to figure them out and expand on them. Then 8000 supplements were written about them and all the mystery and excitement was lost. 🙁

Good Adventure. Complex environment. This could be a great stop the first night on the way to the first village and the first bar. Or, maybe this is the ACTUAL prison of Turin Turkoobasis, or whatever his name is from Dwimmermount. He’s THIS pathetic little thing, and not sitting in the prison at the bottom level. The mind races to find excuses to use this adventure. That’s a good supplement.

7 Responses to The Prison of the Hated Pretender