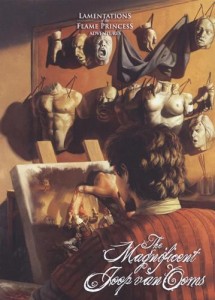 We are not amused.

I don’t review supplements. I have no interest in them. This is a supplement. It’s advertised as an adventure. It is not an adventure. It describes a 6th level magic-user. It’s set in Amsterdam in 1615. That makes it useless for most users.

The booklet is 18 pages long. It describes Amsterdam. It describes Joop. It describes his two servants. Joop is an artist. He works his magic via art. There is a section for magic plays. There is a section for magic sculpture. There is a section for magic paintings. And Poetry. And Architecture. And Engineering. You get a description of his house. It has five levels. It has nine rooms. The descriptions are short. And boring. “He keep his room spotless.” “There is a wine cellar here.” Why bother with descriptions? There are tables for buying & selling on the black market. They are mundane, just describing how much you get for an item. There is a single fifty-entry table that describes some random things that can happen on the docks. This is the only interesting section of the book and could be lifted for use in any city. The last page of the ‘adventure’ has about 13 adventure seeds on it. “Joops goes back in time and sends messages” “Joop wants to meet the players.” “Someones Joop-designed house is being weird.”

You can savage maybe two things more this book. The first is the events tables for the docks. An opium warehouse catches fire. A slave ship is having a sale. A mermaid is looking for a lover. Lightning strike. or … “Everybody dies. Seriously. Roll up new characters. Amsterdam is wiped from the face of the earth.” Yes, that’s an actual entry. I’m not going to begrudge the designer his little jokes, especially with other entries like “The Preaching Prostitute” and ‘Beer & Cheese festival” are on the same table. It’s a decent table and good for a city-based game.

The other thing to salvage is … the design? of Joop. He’s listed as a 6th level magic-user but he has no spells. Everything is done via his art, architecture, engineering, etc. This can be expanded on, especially if you ignore the line that says he’s sixth level. Make an NPC magic-user and give him some powers. Don’t worry about ‘spells’ or designing them like an NPC Just create some weird ass shit that they can do. Magic is mysterious, yo!

Other than that … this book kind of sucks. The setting is so niche and I find it a great turn-off. The whole thing could have been summed up something closer to “a liberal try-sexual magic-users in 1615 Amsterdam.”

And it’s not an Adventure!