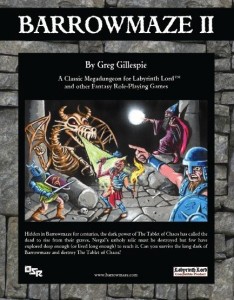 Hidden in Barrowmaze for centuries, the dark power of The Tablet of Chaos has called the dead to rise from their graves. Nergal’s unholy relic must be destroyed but few have explored deep enough (or lived long enough) to reach it. Can you survive the long dark of Barrowmaze and destroy The Tablet of Chaos?

It’s good, but not as good as the first one. Still worth having.

Barrowmaze is a giant dungeon. Unlike most traditional dungeons is doesn’t have multiple levels; it sprawls out over one level. Hmmm, maybe that should be two levels if the surface is counted. While the original Barrowmaze detailed about 16 barrows on the surface this sequel expands this to fifty, and includes rules for generating more. This allows for a MASSIVE barrowfield above the dungeon complex. This also allows for the inclusion of multiple entrances. Several of the mounds have separate entrances to the dungeon. Multiple entrances are absolutely crucial for a large dungeon. Without them the episodic nature of the dungeon is sundered and the players loose the ability to skip over sections and be enthralled by the mysterious new place they have descended in to. The maps proper are nicely done with a decent amount of loops and detail. Pits, columns, statues, secret doors, bricked up doors, same-level stairs, pools, oddly shaped rooms, etc, all add to the variety of the dungeon.

There’s a decent number of factions in the dungeon. These range from two competing priesthoods, the original priesthood and mongrelmen slaves. There’s also a small army of other individuals and groups running around. Harpy packs, gargoyle packs, intelligent “good” undead, and others all combine to allow for a decent amount of role-playing in the dungeon and break up the hacking. There’s also a good variety to the mundane treasure with lots of details on the goodies to be gained, as well as a decent amount of variety in the magical treasure. There are STILL too many “+2 longsword” type items in the dungeon but there do seem to be more “with a lion crest on it” or “+2/+3 vs chaos” magical items in the dungeon. Things do occasionally go weirder, such as using the contents of canopic jars for medicinal purposes/healing or the wide variety of rune stones, amulets, and death masks available to find. The mini-rules expansions for breaking down walls, searching catacomb niches and others add a decent amount of variety to the adventure and give it its own flavor that the players should remember for quite some time. There’s also a wide variety of new monsters, just as there was in Barrowmaze 1, to confound and challenge your players.

What’s missing seems to be in the individual encounters. The first installment had a certain … joie de vie? in the encounters that this one seems to be missing. The encounters and room description in 1 seemed to be shorter with a certain ‘naturalistic’ flair. There were signs of other people having explored the tombs. Dead adventurers. Some of the monsters encountered were in the act of doing things. That doesn’t come through very well in this sequel. There’s an encounter or two that buck this trend but for the most part it’s just undead in tombs that attack or attack when their tomb is looted. That’s a bit disappointing. Those encounters really helped bring the first module to life and added extra dimensions to it. It felt like a real place. This one feels a bit more like ‘just another dungeon.’