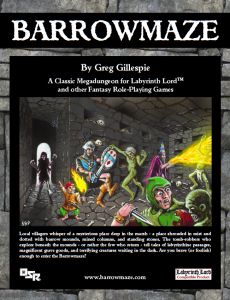 Local villagers whisper of a mysterious place deep in the marsh – a place shrouded in mist and dotted with barrow mounds, ruined columns, and standing stones. The tomb-robbers who explore beneath the mounds – or rather the few who return – tell tales of labyrinthine passages, magnificent grave goods, and terrifying creatures waiting in the dark. Are you brave (or foolish) enough to enter the Barrowmaze?

Barrowmaze is the real deal. It delivers. Its not weird. It’s not gonzo. It doesn’t deliver that idiosyncratic OD&D feel. It does feel real; it’s pretty internally consistent. And it’s a GREAT environment to explore with your buddies on a friday night. Err … lots of friday nights … this dungeon is HUGE. This is worth having, and I don’t say that about many products.

This is a strange product to review because it fills a strange niche. It’s not a megadungeon like Stonehell. It’s not a mini-dungeon like the VAST majority of nonsense published. It instead fills some gap between the two. Many Gates of the Gann, WG5, ASE1, G1-2-3 (taken together) and S3 all kind of fall in to the same category. These are large enough to support many nights of play and offer a decent exploration element, with the mystery and unknown that delivers, but are still self-contained products. There’s a clear beginning and ending, unlike a megadungeon. The players can get it in to trouble and see the results of their actions in a way not possible in shorter products. And this is a very good thing indeed.

The introductory text is .. thorough? It’s five pages long. We’re not forced to sit through short fictions though. The dungeon history section is only one column long, and in large type also. Most of the rest of the introduction details unusual features of the dungeon. A large part of the dungeon is burial crypts with burial niches. There is a short section on how to handle things when the party searches a room with 300 niches on the wall: how long it takes, what happens with the wanderers, and what they find. Other sections include things like “breaking down sealed up tombs with sledgehammers” and “what happens when you a read a tablet covered in runes”, both of which will not be uncommon occurrences. The DM is presented with a decent number of sections with advice on fear, time, restocking, etc. This is all wonderful to see. Taken together it presents a vivd picture of what exploring THIS dungeon is like. The elements that are going to make is unique and stand out in the minds of the players. That’s a very nice element. It also presents some new rules for turning. I’m happy to see this, especially in a module with so much undead in it. As I’ve ranted before, Turning is the only element of D&D that I’m unhappy with. The unlimited nature and ease of turning undead has turned an iconic monster, the skeleton, in to something else. In Barrowmaze all undead turning takes place one step more difficult on the chart AND each additional turn attempt is 1 point harder. This resets every day. This puts turning in the ‘resource management’ camp just like spells, torches, wandering monsters checks, and the rest. There’s additional tension as the cleric is biting his nails trying to decide to turn now or save it for later. D&D is one of the ultimate “push your luck” games.

The Barrowmaze map is FRIGGING AWESOME! It’s HUGE! It’s ginormous! It’s got like 190 keyed encounters on it, but that ignores the fact that many encounters have sub-rooms. A, b, c, d, etc. Or, actually, 142 D1, 142 D2, 142 Q3, 142 D4, etc. The mapping is dense with rooms almost on top of each other and almost all of 2.5 pages taken up with rooms. It’s an excellent example of dungeon level design. There are several “sub-sections” with their own feels, varied room shapes, a WIDE variety of secret doors, numerous pits, portcullises, etc. It is GREAT! Loops are everywhere! I like these sorts of maps for two reason. First, the loops present an environment where the party can go around certain encounters. They can ambush monsters or get ambushed by monsters. They can flee in to the dark. This is an important part to presenting a lifelike, but fun, environment and also in presented the players with choices. Secondly, the complexity of the map lends an air of mystery to it. The UNKNOWN is every present. The party never knows what’s to come, what’s behind them, what they mights have missed, and so on. This is only possible, IMO, on a complex map. I think players quickly get a strong feeling about the map; weather it’s complex or not, and this sets up some feelings in them. The two extremes here are “let’s go left and clear that out” and “oh shit! I’m freaking out! Do we go left or right?!!” In the first example the group is methodically exploring and clearing and is not really immersed. In the second the group is fully immersed. It’s this second feeling that these complex maps help invoke. [My best experience of this was in a Rients game at GaryCon 2012. I truly had NO IDEA where we were or what was down those hallways. It was A W E S O M E!] Each section of the dungeon has it’s own wanderers table (undead & vermin heavy) and I’m happy to say that NPC parties show up! I LOVE NPC parties in my dungeons! They offer an opportunity for roleplay and significantly different combats than the party is used to. They also have a different feel to them that makes the party more emotionally connected, I believe.

The encounters here are pretty decent. Just like the wandering tables the rooms are dominated by undead and vermin. Skeletons, rats, spiders and zombies, oozes and shadows. These are augmented by factions within the dungeon. There are at least three major groups in the dungeon, and that doesn’t count the undead, the intelligent undead, the NPC parties or the independents. This allows for a great deal of interaction. There are a great many opportunities to roleplay and to get yourself in to trouble without ever having to draw your sword. Most of the rooms have some little detail that can help the DM’s imagination. Impaled adventurers, drag marks on the floor, a nest and rubble pile, etc. These little tidbits help me as a DM add extra flavor and variety to the room. It’s just enough information to get the juices flowing. I’m not sure any of it it feels arbitrary either. It’s not just random dungeon dressing but rather it seems to make sense in the context its presented it. This is EXACTLY what I’m looking for in a module. The room descriptions are terse (12-15 rooms to a page) and yet give me what I need to help me run a game. No wading through mountains of text and no spoon-feeding, just good assistance. There are also a couple of other things which should be noted. A great many of the rooms have the occupants DOING something. A zombie stabs at a wall, beetles feed on lichen, or two ghouls argue over who gets to eat a tasty morsel. These sorts of encounters help the dungeon seem like a real living place. They bring it to life and make it seem like it has an existence outside of the parties interaction with it. Secondly, there are A LOT of dead adventurers in this place. Impaled. Gutted. Crawled in to a hole a dies from wounds. You get the picture, A LOT. This, along with the living NPC parties, also helps give the place a sort of living history outside of the party. It also helps to serve to up the tension level as the parties imaginations run wild. There are good traps, good tricks/specials, clues scattered about to other areas, and a real feeling that something is going on in this place.

There’s a decent variety to the monsters. In addition to Zombies we also get Funeral Pyre Zombies, Ju Ju Zombies and Ravenous Zombies. In addition to skeletons we also get Sapphire, Fossil, and Exploding Bone Skeletons. There is also something like four pages of OGL credits to handle all of the imports from other products. The monsters mix things up enough to keep the party on their toes and yet it never feels like a random assortment. The magical treasures are a mixed lot. There are a few unique items and several of the more unusual items, such as +1/+2 vs humanoids, and he like. There’s a skull that shoots out rays like a Wand of Paralyzation, and a few of the magic shields have standards on them like “a silver tree” or some such. While I do generally like my magic with more details and a bit more non-standard, this is a good amount of details for a product without an OD&D feel to it.

It’s big. It makes sense. It’s full of great encounters. Go get it and play it!