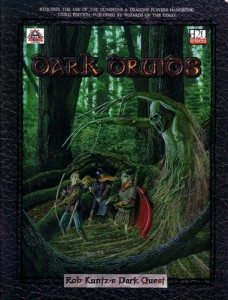 In Fang Forest dwell a fanatical sect of druids bent on the ruin of the innocent. Under shadowy caves they command dark forces of nature and magic never before seen in the lands. With the fall of another human settlement to the druids’ evil, the good priestdoms call for their destruction

Gather Ye Heroes!
Somewhere in this 3e mess of text is a decent adventure. Trying to tease it out if going to require some hard work.

What is it with 3e adventures? Why do most of them feel so padded with endless text all glommed together? Then you combine it with the lengthy stat blocks and you get something that takes a pick to get through. I gather this methodology first appeared in the late 1E era and then became prevalent in the 2E era, which I totally missed. Maybe the fact that I never look at 2E product means I have a insufficient understanding of the history. In any event, this thing is VERY hard to read and understand. I had hoped for more in this since Kuntz did one of the next levels I’ve seen: the first level of WG5.

Four pages of background and introduction lay out the situation: Evil druids want to take over the world and kill everyone. That’s too brief so so it’s expanded on the next four pages. “Your group of adventurers are called before a meeting of the good religions in this region.” That’s an actual quote from the module. Ok, I’m being too rough. The intro text has a nice two-headed dog in that eats children, so that’s cool. Otherwise it’s just a lot of text that tells the party to go save the world. I HATE saving the world. Maybe you do though. Good Luck…

The wilderness journey to get to the dark druids fortress has a potential for six encounters. Essentially the party is traveling through a forest twisted by the druids. Three of the encounters involve combat. The monsters are interesting enough, evil ents, a ‘Thresher Demon’ and an evil grove with torture trees in it. The flavor text does a decent job in communicating the twisted nature of … well, nature, and the monsters are decently done. They are interesting combats and monsters. They also deserve more than to be buried in mountains of 3e stat block text. Demons who live under the ground and symbiotic demon bushes are all very nifty little things. There are a few clues scattered about also that indicate what’s going on with the druids.

The party ends up in crudely dugout dungeon of dirt and loose rock. This section has about seventeen encounter, none or so of which are in dug out rooms and nine of so of which take place in a great cavern with fungus gardens and weird tree/nature stuff. Large fonts and a combination of bold and normal text, parenthetical notes, game stats and stat blocks all combine to turning this in to a hard to follow mess. Wicked riddles of the ‘guess what what the designer wanted you to d’ variety abound. There’s also a strong dependance on illusions both in this section and throughout the module. There’s all sorts of bizarre things present. Trees surround by clear goo, scabby mushrooms, weird plants to play with, spirits to talk toAgain, there are clues here to what is going on with the druids. The puzzles are tough and not generally of the type I enjoy. There ARE a lot of things to play with, investigate, and poke though and really only two or maybe three creature encounters. If you can wade through the confusing text, which is far worse in the puzzle rooms, then you’d find a neato little environment to explore.

The main part of the fortress/dungeon has about six rooms on the first level and about fourteen on the second. The plot thickens chickens! Well, not really. It seems that the two factions within the dark druids are not engaged in an open battle trying to kill each other. This means about a dozen high level druids are now going at it for all their worth. Factions! Well, no, not really. Factions give players someone to interact with, a base to rest at, and some interesting roleplay opportunity. The best the party can hope for here is that one side kills the other before they turn their attention to the party. It’s really just more flavor text. This section is basically just a large number of set piece battles with pairs of casters and a couple of puzzle areas in order to stop the summoning of a demon. The rooms generally contain SOMETHING interesting, like a key in a barrel or a room full of choking red dust or a body to speak with dead on.

Kuntz does a decent job with new monsters and new items. A tarrasque spine and a Sword of Tentacles are both good examples, as well as several other wondrous items. It’s just so hard to wade through the text to pick out the good parts. A terser version of this module would be most welcome, although it is a rather adventure and thus an expanded druid fortress or wilderness section could add a lot to it also.It ends up being nearly as bad as A Challenge of Arm’s, but less gimmicky.