Catacombs of the Bear Cult 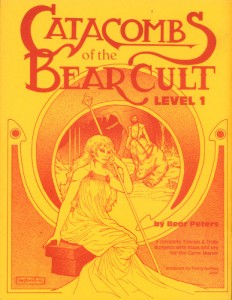 The Great Road, that ancient highway stretching between Khazan and Khosht, has long been the overland trade artery of the Empire of Khazan. Armed men guard every caravan, for the route is not a safe one. Still, the way has become even more perilous since the re-emergence of the Cult of the Great Bear. Sweeping from the forested hills north of Khosht, the Cultists have wiped out whole caravans, leaving only the bloody ground for would-be rescuers to find.

This is one of those crazy cool amateur dungeons from the early days of the hobby. It’s full of bizarre little things from before the days the rules lawyers took over. You’re going to have to work hard at a conversion to play this with D&D. It would make a nice mini-location in a hex crawl.

While at GenCon 2012 I played in a game of Tunnels &Trolls run by the creator. He gave us a list of adventures to pick from and the group picked Dungeon of the Bear. I enjoyed it so much that I stopped by the FBI booth looking to pick it up. Instead I ran in to St. Andre who proceeded to tell ME about HIS characters .. err… other games he had run at the con. He claimed there are no more Dungeons of the Bear in existence to sell so I ended up with something similar: Catacombs of the Bear Cult — Level One. Level Two was never released. 🙁 Bear Peters and Stackpole were both involved in this … as they were in Grimtooth products, so, well, good luck to the players …

The background is about three pages long. These are FBI/T&T pages though so the font is huge and there are wide margins on one side to take notes in. It consists primarily of descriptions of the leaders of the Bear Cult and the average members. Stats, essentially, some personality, and the reward you get for turning them in to the Death Goddess. This is SOOOO cool. Who the hell is the Death Goddess? Why does she care about these idiots? Bring in the second in command? Get a day dedicated to your name in the arena! Bring in the leader? Get the same thing he gets: minor regeneration. Of course, she’s going to use it on him to see how much torture he can take … Wowsers! Who writes stuff like that anymore? The bear cult guys are a kind of rebel group attacking caravans to their home city so as to throw off the last vestiges of the Death Goddesses rule. WHat?!! Oh, and they do this by throwing a new recruit and a bear in to a magic pool in order to turn them in to were-bear. What?!! Who the hells the good guys in this adventure??!! I have no idea AND THAT IS AWESOME!!!! Of course, the bear cult is in the dungeon right in front of the players, so my guess is that the Death Goddess is going to be handing out rewards pretty soon.

The primary hook is lame. The players are ambushed by the cult along the road to town. It’s an overwhelming force, the players are captured, stripped of their stuff and thrown in a pit. Railroad, railroad, railroad. The last page of the adventure provides about ten other hooks though and those ARE good. “The Gold Spheres in room X are in demand.” or “The Death Goddess wants the God bear captured and brought to the arena for a fight” or “Hired to save Alexandra” or … well, you get the idea. There’s a large number of potential subplots present which the players could get their mitts in to.

Ok, I hate railroads and I hate players getting captured, but this one is COOL. They get stripped of their gear, put in a cage, and lowered down over a MASSIVE sinkhole with a small forested area at the bottom, with stream (the map for this is quite nice!) And then the cult herds the mounts over the edge of the sinkhole where they plummet to their deaths! Oh, and then a GIANT BEAR comes out and eats the horses! He wanders off as the party is lowered about 2/3 of the way in to the Sarlac pit. The players must then escape the cage, avoid the GIANT BEAR, get their stuff, get out, grab loot, not die, etc.

Having escaped the cage they are now at the bottom a deep sinkhole with a GIANT BEAR in it. With no weapons. Well, except maybe for a dagger. Did I mention the GIANT BEAR? His teeth are each a foot long… The bear cult gives him people to eat so he’ll grow larger/more powerful. Eventually he’ll get large enough to climb out of the sinkhole and, their doctrine states, go kill the Death Goddess. Are you actually reading this shit??! This is CRAZY! And it’s done in a pretty terse style that doesn’t bore you to death. Three are two obvious cave openings. One leads to the Hall of Thirteen Golden Bears while the other leads to a pack of wolves. Recall: no weapons. Ouch! It is here the first problem comes in. The module states that no one in the cult knows that bottom of the sinkhole links up with their old bear cult temple that they call home however the passage form the Golden Bear room to the sinkhole is pretty obvious and its clearly a part of the temple which their leader is supposed to know about. We shall ignore this and turn to the other passage. It’s full of people who have escaped being eaten by the GIANT BEAR. Besides the wolves there are goblins and an escaped elf woman. There’s also invisible dog guardians, a fire elemental in human form with flaming hair, a pack of earth elementals and some shocker fish. I have NO IDEA who they all fit together. Ok, no, the module makes it pretty clear where they live, but the goblins have to flee past the wolves every time to get water and food? And they never messed with the earth elementals even though they taunt the invisible dogs all the time? Even though the dogs are past the room with the elf chick and she’s the got place trapped to hell and back? Oh, by the way, there’s 20,000 gold ingots back here work 50gp each … and several curses for those foolish enough to loot the treasury of the !!Great Bear God!! Ignoring all of the logical bullshit THIS STUFF IS AWESOME! Everyone will talk to you. They all have their own goals. The party can help them, avoid them, combat them, betray them, get betrayed by them … I wish more modules did this stuff. Several of them can be used against the cult.

The main cult complex has about a dozen more rooms. A decent number of secrets, curtains, same level stairs, pools, etc but not really an exploration map, even though sections of the caverns and the temple area both link up to it. It’s more like a main fortress with some caves nearby and a forgotten dungeon attached. These portions are pretty normal rooms, with a couple of exceptions. There’s a nice trap room, some faction play (nice! always good to see factions in a dungeon!) and THE ROOM. THis is the room that the cult uses to transform people in to were-bears. Did I mention the thin stream of blood oozing from the ceiling and in to the pool in the room? Very Nice! The last part of the dungeon is are the mostly hidden temple portions. Weird bear statues, a mechanical bear, a weird half-man half-bear creature, as seen on the cover. T

he monsters are generally unique, there’s lots of strange things going on and lots for the party to play with and its all got that very authentic late-70’s feel from when everything was new and designers didn’t need to explain things. This is a great module. You’re going to need to convert it for general D&D use, but then again you’re going to have to make major changes to most of the modules I review in order to use them well in your game. Why not spend that time working with some interesting and inspiring material?

1 Response to Catacombs of the Bear Cult