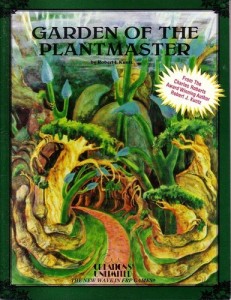 On an alien world there is a city. Dead. And in that city is a Garden, qiute alive. In that garden is its former architect, the Plantmaster, now a captive of the garden’s new master, Lamash, the Demon of Wood. The Plantmaster, like all the garden inhabitants, is mutated; and it is only a matter of time before he finally relents and gives his tormentor the key words for unlocking the garden’s doors, which prevent Lamash from entering… YOUR WORLD!

I hope you like Kuntz adventurers because I picked up something like six of them from the 5 buck chuck booth at GenCon. Garden of the Plantmaster is a frigging deathtrap! It’s also a VERY cool little environment to send your players that makes little sense. It’s heavy on the combat but has enough other items to make it worth keeping, especially at $5. It could also be held up as an example on how to design a module for higher level play.

The hook here is pretty terrible. The party gets a vision while traveling, a mental call for help. Following the way they find a waterfall that flows UP! Ok, so the whole mental call for help thing is a little trite but I LOVE the water fall flowing up! More adventures need things like this; some way of clearly delineating that Things Have Changed and that insert whimsy and wonder in to the adventure. The hook is lame but it’s also short enough to be pretty inoffensive. backwards waterfalls could be inserted almost anywhere in any campaign, or even appear like the Dungeons & Dragons roller coaster in an amusement park.

The map for this adventure is one of the worst I have ever seen. In fact it may actually be the worst map every produced for any adventure module, ever. It has some kind of crude symbol like things on it and appears to have been created in some 1987-ish computer graphics product. It’s not completely unusable but it might as well be. Attempts to follow the map led me to hate it, and probably the module by association. A bit of searching though turned up a color version on Robs blog which does a great job of communicating the environment, is much more readable, and fires the imagination. It turns an awful experience in to the exact opposite and got me excited about keeping and running the module. A day-glo WONDERLAND! This place is an overgrown garden with very dense vegetation off the garden path. The path has a lot of nooks, crannies, and dead ends and more than a few hidden areas. It’s probably best imagined as a cave system map with some wall and fields you may be able o walk through to get to new areas … if you leave the path. There are a wide variety of wandering monsters to compliment the adventure, organized in to flyers, rivers, and path/land. It’s not going to win any awards in that category but by modern standards its an absolute home run.

The encounters are … somewhat disappointing? Dense? Interesting? All of the above? Density first. One of the first encounters will probably be with some spiders in a clearing. Fifty feet past that on the path is a killer tree and slyph. Sixty feet after that on the path are some giant snakes. And then something else, and something else, and something else. It’s all packed in VERY tightly and seems a bit relentless. The place is certainly teeming with life! Life that invariably jumps out and attacks.

There’s a huge variety of new monsters included by the designer which all seem to have new and interesting way to kill the party. I love this kind of stuff; new monsters keep the party on its feet and idiosyncratic rules that accompany them add a lot of flavor to combats. Enveloping trees, plant spores, vines that grab, there’s just a massive amount and variety of, generally, plant based mayhem to confront the party.

Unfortunately there’s not a whole lot to supplement the amazing monsters and their relentless attacks. At best there’s some elf-like people who live in the garden who provide some places to rest, role-play, and who present some faction play. Some of them are nice guys, some don’t care about the party, and some want to kill the party. Some have goals to pursue and rivalries with other tribes in the garden and some have other NPC’s attached to them that make them little more than minions. This was all a pretty welcome relief from the relentless combats that the rest of the garden provided for. The tricks, traps, and magic items found in the garden are all going to be of the plant-based variety. That’s nice … and not. Leaves that give you Storm Giant Strength when munched on are great … but how do you know to pull them off and eat them? The same with seed pods … the whole garden is full of leaves and seed pods, what makes these special enough to investigate further?

There’s quite a bit of supplemental material in the module to help you run it, or other plant based adventures. Generating random, and usually aggressive, flowers. Vine types. Bird types, Insects, fruits, spices, fungi, uses of plants, different types of trees and shrubs properties of various plant life … the list goes on and on. There is a HUGE variety of additional resources to help the DM get in the right mindset and increase their vocabulary and get their brain working overtime in order to provide interesting detail to the players.

No single encounter is likely to be a problem for the party. That means that fireball and lightning bolts are not going to be of much use. Cure Disease, Cure Poison, and other spells of that type are going to be the go to ones for this adventure. The relentless attack of the lower HD creatures combined with their special attacks is going to have even a 12th level party having to watch themselves and their resources and how they play. Nothing earth-shattering is going to End the World, but the characters do have to use their skills in a pretty alien environment … which should be challenging when the umpteenthtype of plant poison/toxin/infections/fungus impacts them.

1 Response to Garden of the Plantmaster