AA#24 – The Mouth of the Shadowvein 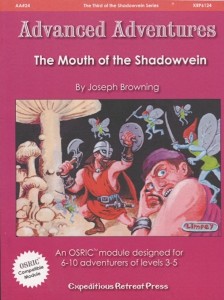 The depths of the underearth weigh heavily upon the party as they delve deeper into the cold, hard stone. Every river has an end, even those that never see the light of day. Many adventures behind, the party continues to find the mouth of the Shadowvein. What lies ahead is surely dangerous, but the lure of the deeps is strong with gold and magic.

This modules continues from where AA#23 left off, with an underground hex crawl an five more hexes detailed. Tis is part two of the great D1 cloning, except at FAR lower levels of experience. The party travels through a map much like that in D1 and has some random encounters on the way. Several hexes along their way, which is a great underground river, are detailed and the map shows several other paths with undefined hex encounters located along these other more numerous, but small, pathways. A very rudimentary random encounter table is provided. You’re looking at about 6 days travel upriver, and with the chance of an encounter only 1 in 12, the party is unlikely to encounter anything random, interesting or not. Much of the introductory text looks to be just a copy/paste job from AA23. “1-2 ogres” is not ground shattering territory.

The first hex details an obstruction in the river that can be bypassed through some caves that immediately cause everyone to go insane and are inhabited by 12 wraiths and a lich. Zowie! That certainly a starting things off with a bang! The lich runs a portage service in which he has skeletons escort people through the caves of insanity to the other side of the obstruction. If the party keeps cool then this is just a little flavor text diversion. If not then they have 50 skeletons, 12 wraiths, and a 20th level lich to contend with. Other than the intriguing possibility of the party interacting with the undead in a a non-violent way there’s one other interesting thing in here. The lich can send the party on a quest if they are bad kids. That may provide the motivation needed to get the party moving toward the end of the river. It’s too bad that this may not show up if the party doesn’t get themselves in to trouble in the lich’s caves.

The next two encounters are quite brief. The second encounter is just with a large group of grimlocks in a wide spot in the corridor. The party can bluster past them if they are strong enough. Or, of course, you could just ignore the entire thing since the map indicates that the wide sport is no near the river and the party is, of course, making their way up the river in boats. If they are not then this is going to a ROUGH encounter for 3rd-5th level characters. There are about 50 of the creatures on a small 60×60 or so room with a 20′ wide hallway leading in and out. A single fireball may soften the dudes up A LOT, so lets hope your MU has it. The third encounter is with a friendly deep gnome mining camp.

The last two encounters are the real meat of this series. Te first is a great open cavern, 2 miles x3 miles, former home to a drow city and now overrun with mold, fungus, and other strange stuff. Mold, algoids, atomies, mites and pesties, mutated shrimp, gambados and … FLUMPHS! And the flumphs make sense! These are less encounters and more broadly outlined environs, as you might find in a Judges Guild or Stater hex crawl. You can also compare this to some of the keyed locations in D3 – Vault of Drow, except with fungus and other things instead of a drow outpost. These are very brief set ups for further adventure. A ruined castle littered with mite and pestie traps, pits, and barbs. Or A solitary monk stone giant interested only in meditation. These locales might get a paragraph or two each, just enough to outline what’s going on, while the rest will need to be expanded upon by the DM. It’s an interesting little environment but devoid of motivations. By that I mean that there’s no reason to get off the boat. Just float on down the river. I really like the various mix of encounters in this room. There is a lot of variety and most are suitably bizarre to be make the players imagine that they really are in a different environment. IE: underground life & civilizations. There’s just not much reason to go poking around and almost no treasure present at all. 250gp at one site and 4000gp at another. I should note that there are no less than four different wandering monster tables for this cavern and that they are chock FULL of interesting and cool encounters. All of the monsters are DOING something. There’s a great flumph migration, returning hunting parties, thieving beasties, nests of hissing giant hissing cockroaches (IE: shriekers) and more! This is EXACTLY what I want to see in a wandering table. A wide variety of encounters and the monsters actually engaged in some activity. This is the kind of stuff that does wonders to jump start my imagination and is one of the best parts of the module in that respect. It’s very easy to do, just a few words tacked on to the end of each description. “scatter before the oncoming party” or “decides they’re what’s for dinner” or “returning from a successful centipede hunt.” I really wish more designers did this and I wish more of that type of detail was in this module.

The last area is the actual great inland sea. The Mouth of the Shadowvein. The goal. An anticlimax? This is the largest location detailed in the undersea and has but a column of text describing what’s going on, followed by a brief description of a ship in the location. The wandering charts for this section are back to the same-old stuff: “2-12 barracuda” or ” “1-4 giant crabs.” The main area of exploration is a ship and it’s almost certainly going to involve a pitched battle. The party will be fighting wave after wave of mutated brine shrimp men as they protect their temple/ship. A nice order of battle is presented in text form to help the DM run the battle. After this battle the rest of the ship is going to be a let down. Several rooms are described but they are all empty and/or non-working. Then why waste time describing them? Or, better yet, put something in them that the party can play with and potentially get in to trouble with or get a boon. Instead it turns out to be a pretty boring place to explore without only one nice thing to play with, some locks. At this point the adventure ends. That’s it. No more. Because there was no end goal it feels like a let down. The entire point of the two modules was to explore/follow the river and now that it’s over … well, what’s next? A few more notes about where to go from here would have been nice.

The main humanoid monster is a bit interesting but is really only just a multi-hd orc out of water. There’s a new dragon that’s not really interesting and a couple of robots that are the best of the new monsters. Robots are cool, just like a fez. There’s a handful of new magic items also. These are VERY good. The bulk of the magical items in the module are just normal old book items but the few new ones are very good. Ok, no, two of the new ones are very good. An amulet of undead control is filed with a bit of the negative material place and glows with a dark purple light when in use. Cool! And it even has negative effects! The Rod of Undead Resurrection is formed from the congealed blood of the corpse of a dead god … the party gets to break it off to loot it! That’s a pretty bad ass origin story. The rod is uber-poerful in it’s present form … as a rod it gets unlimited usage, yes? It basically destroys undead by bringing them back to life … with no save unless it’s been dead for over 200 years. Ouchies! That’s gonna need some charges and/or negative effects there … But still .. VERY COOL!

The module suffers a bit from a a couple of things. FIrst, there’s a need to explain everything. For example there’s a lick who turns invisible and wear boots of elvenkind. I don’t think there’s any need to explain things. He’s a lich. If you want him to walk through walls then just say “he can walk through walls.” The need to explain things removes a lot of the wonder and magic from things. There’s also a bit of a gap in the text. There’s a lot of it, but it doesn’t quite reach the level of evocative very well. I should be drooling all over myself at the great fungus cavern, given my love for such things, but somehow it never really came to life in the text. I don’t think I know how to describe this … too mechanical? I don’t know … Maybe it was just the overall lack of motivation in the adventure. The party is exploring and going down the river just for the sake of doing it and thus has no reason to stop at any location except to explore and loot for XP. I’m ok with that, in fact I prefer it, but perhaps a McGuffin or two in the caverns would have helped get the party off the boat and exploring more things with a glint in their eye.