T2 – The Things in the Forest 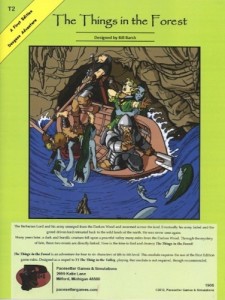 The Barbarian Lord and his army emerged from the Darken Wood and swarmed across the land. Eventually his army failed and the greed-driven lord retreated back to the wild lands of the north. He was never seen again. Many years later, a dark and horrific creature fell upon a peaceful valley many miles from the Darken Wood. Through the mystery of fate, these two events are directly linked. Now is the time to find and destroy The Things in the Forest!

T1 – The Thing the Valley, was one of my favorite module finds. This one has a couple of good things going for it but mostly misses the mark. T1 appealed to that folk tale groove that I get in to, rather than the OD&D feel that I generally prefer. The best parts of this module have that same folk tale feel.

In T1 the party found some things that belonged to the former owner of a mansion, along with notes on where the family moved should the master of the house return. This module follows on by assuming that the party has journeyed to that city and found the family in order to return word of the masters demise. This leads the party to discover a map to where the former lord went on his last adventure, which presumably turned him in to the undead creature discovered in T1. This is not a bad set up and is a decent follow on thread from T1. Unfortunately it takes place over almost four pages of text. That is quite a bit of exposition for me. Eventually the party take a long boat trip and end up at the edge of a barbarian filled forest. There’s a decent bit of text to get there, about two more pages, and in the end it just ends up being a combat with some were’s. I think there’s something hidden here though. There was a lot of talk awhile back about making the parties journey to the ‘mythic underworld’ memorable; that there be a hard transition from the mundane world to the fantastic world. I did this once years ago before blog-learning smartened me up and added a label to it. The world was full of mud & filth villages but when the party left the road they crossed over in to an area that was more green than it should be, and in which the shadows were deeper. A world of mist-filled grottos, etc. You could do a lot with that here. The cross-over point from the mundane to the fantastic is the HUGE forest that the party is on the edge of. The were’s have breached the edge. With a decent bit of flavor texting the DM could set the stage for some pretty serious Mirkwooding.

The journey through the forest is devoid of wandering monsters. And only has three set encounters. There’s a small part where the party finds a ransacked hunting camp. There’s another where the party finds some pillars … but they only do something at midnight under a full moon. Uh … given the perk they provide and coolness of the effect I can’t imagine not using it. Basically the party members are given the choice of loosing a stat point in order to get an amulet that protects them from undead. I’m pretty sure that your stats should be going up & down regularly in a good game, so the choice isn’t as clear-cut (“No”) as it would normally be. The last encounter is with an evil NPC party that has been following the party. As written this is kind of lame. They just show up and attack, get their ass kicked, and retreat. It would be MUCH cooler if they had hired on to the boat, taken it over once the party left, and then did some hit & runs on the party before the main dungeon, or just waited till the party was out of the dungeon and hit them hard then. Both of those allow for a decent bit of role-play and some foreshadowing of the villains before the party fights them and that add SO much more to the encounters.

The main dungeon has 31 room, has no wandering monsters, and is full of undead. FULL of undead. Because they are special undead there is no turning allowed and there are about 90 of them in the complex. A very large number of them are likely to be encountered by the party and combats and noise in rooms will pull undead from most nearby locations. There’s not a whole lot going on inside other than monstrous/undead encounters. There’s a decent trap/obstacle at the beginning and a couple of lakes to maneuver around, but otherwise it’s just a monster hack. T1 did a great job of setting up a foreboding atmosphere but that is lost in this module by the sheer numbers of undead. Further, the undead are a little too mundane; there’s not really a sense of danger or decay in the surrounding environment. Many of them have footlockers! That’s not the type of undead I’m fond of. I want mine to be dark creatures of evil with very little logical behavior behind them … or perhaps set patterns behind them. This reduces them to just another creature to hack through in a dungeon that not very evocative. The last room has a nice description but it’s wasted by no follow-up. It he skulls and body parts had coalesced in to the creatures you fight, with a little horror/gore thrown in, then its impact would have been much greater.

The environment and setting in T1 meshed with the creatures to creature a nice little folk tale like feel with a horror element. That sort of vibe is almost completely lacking from this module.

This is available on Dragonsfoot, in a bundle with T1.

2 Responses to T2 – The Things in the Forest