NS2 – Beyond the Wailing Mountains 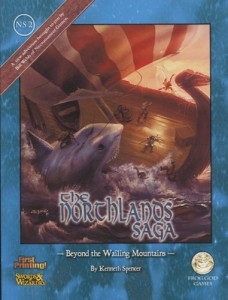 The story begun in Vengeance of the Long Serpent continues. The heroes have defeated the Children of Althunak, but the fell god’s evil fane survives. Strange beasts, dark magics, and unholy cold await in the lands Beyond the Wailing Mountains.

I have a healthy respect for low-magic, historical, and horror based games. In the role of everyman you get to react to things as a normal person, push the red button, go in to the basement and all of the other fun things that wisdom and character survival dictate that you should not engage in. These are all one-shots, especially at cons, and I seldom have more fun; chaos & character death, HO! I’ve never been able to pull off a historical or mundane game at any other type. It’s just too boring and mired in too much realism. This adventure tries to pull it off. If you’re in to historical settings and/or horror then you should probably check it out.

For background, you’re the crew of a viking longship and stumble upon a strange eskimo cult while out clubbing/skinning seals and rendering blubber. The cult is in all the native villages except one, and in the first module you put down the cult and destroy the secondary temple being constructed … Which implies a primary temple. In this module you take a break from your clubbing baby seals and trading with the locals to travel weeks over tundra, mountains, and ice in order to destroy that primary temple. Do you like dealing with environmental conditions like the cold, and like keeping track of food stores? Navigating dangerous terrain? Then do I have an adventure for you.

The adventure comes in five sections although only one of them has any significant amount of meat to it. It starts with the players meeting with the village elders during their evening feast in their honor and the village getting raided by hordes of Yeti and a Snow Bride. This is probably meant to bring the danger home to the party and provide some continuity from the last module; the cult is punishing the players and village for their actions in the last module. It comes off weakly though. The players just end up fighting a few groups of yeti, 3 or so to a group, while the village warriors battle their own groups. The Death in the Treklant series from Troll Lord had a similar viking-like setting, in the forests instead of the frozen north, and pulled off these sorts of large battles much better, I believe. They were frigging hard, probably a pain to run, and certainly things that the players would remember for years to come. The yeti battle just comes off as a couple of railroady encounters with yeti with some flavor text about other nearby battles surrounding it.

The next three sections of the adventure are essentially the same. The players travel 2-3 weeks over the tundra to reach the mountains. The players travel 2-3 weeks through some mountains. Then the players travel a week or so across the ice fields to an ancient abandoned city. You get a random encounter roll each day, with about a 60% chance something will happen. This could be normal animals on the tundra, or some sort of environmental issue like a blizzard or crevice, or it could be some creatures in the cults service. This probably lasts a little too long. With a decent level cleric the rations situation shouldn’t be a problem and encountering Yet Another Crevice amounts to tedium, not adventure. Some of the flavor text in the encounters is pretty nice but it’s DM text, not players. For example there’s some sleet on the table. This is actually the frozen tears of sorrow of the sacrifices to the primordial god involved. Pretty cool, eh? Now how do you communicate that feeling to the players? There is a decent variety in the encounters and the creature encounters are not all straight up hack jobs; some trickery can work wonders in places.

The lost city with the temple is the climax. It’s very sparsely populated. Most of the encounters should be ok for a group this high to hack through except for the two groups that each contains three 8HD ice demons. THOSE are gonna be tough. The temple in the city is a short little seven encounter linear affair. The high priest has an EXCELLENT little backstory … that is going to be lost on the players as they hack him down. Too bad, it’s really cool, especially the part where his new god forces him to eat all of his own flesh. Ewwwwww! There’s a nice little section at the end on how the evil god, on the down low, messes with the party after they defeat his minions. They are great suggestions for giving a feel of continuity to your game and implying there are consequences for a characters actions.

There’s TOTALLY a Lovecraft feel to this and I suspect you could lift the entire series for a Cthulhu game or some other more modern setting, especially in and around the 20’s era. Many of the monsters have some decent backgrounds as well; for example the Snow Brides are actually ice trolls … except they were once human an have been transformed in to their condition through their marriage to the EHP. There’s a lot of this sort of detail in the adventure even if there’s not much in the way of the traditional D&D weird that I groove on so much. Using this module as a framework and putting in a lot of work to expand certain areas and foreshadow much of the cooler flavor text could turn this in to one rocking pseudo-historical type setting. If you’re willing to put in the work.