A4 – Rise of the Bloodwolf 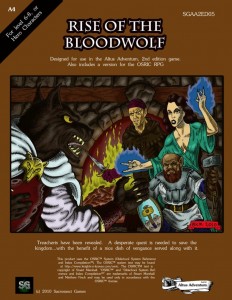 Treacheries have been revealed. A desperate quest is needed to save the kingdom … with the benefit of a nice dish of vengeance served along with it.

This is the end of the story arc started back in module A1 and directly follows the events in module A3 – Hunt for the Ogre Lord. Evidentially there is some vast conspiracy thing going on and the high inquisitor is actually a traitor. The party is allied with some dude who, while he has an army, is courageous, and has long suspected the inquisitors are evil … do you want to guess? Go ahead, guess the rest. Yes, he has very little influence and can’t help the party. Shocking, I know. And thus another lame ass hook is introduced. If the players had any amount of balls they would tell the lord to go screw himself and either move to a neighboring kingdom or perhaps start a nice business where they can profiteer and make a buck off of basic foodstuffs, toilet paper and nylons. Lord McImpotent over there, the guy who won’t help, he has ties to the landed, has a title, presumably a family, and no desire to keep any of it. Our murder hobos however are supposed to go on the adventure because it’s a quest and the right thing to do. Again: the hook should appeal to the players not just the characters. Or maybe just tell them the players “this is tonights adventure. If you want to play then go on it.” While blunt it doesn’t smack of the “do good or else” theme that this hook as going for it.

“Yeah, which adventure we going on tonight Mr DM?”
“Rise of Bloodwolf, this one here.”
“Oh, the one with the werewolf on the cover. Ok. How much are silver weapons?”

This could have been a pretty cool adventure. The party sneaks in to the base/fortress and gathers evidence while dodging legit guard and evil conspiracy members. They find evidence of the treachery and pick up some gizmo they’d been drooling over. Kind of like some kind of Mission Impossible thing. Then the King tells them to do a James Bond Volcano lair assault on the main bad guy base. A kind of sandbox in that we have location and the party has some mission at that location. This is even supported a bit in the first fortress by the notes indicating various entrance strategies such as roof, main gates, and sewer.

But … it goes no further. Instead we get what are basically some dungeon crawls where each room has a werewolf in it. Ug. The first fortress has three levels with about seven rooms per level. The layout is some kind of linear path combined with a three room ring at points. Essentially a linear dungeon. Since there are limited ways in to the fortress then it is mostly a linear romp. The way it works is that the party enters a room, sees some people, the people change in to hybrid form and immediately attack. The party kills the werewolf, loots the room, and moves on to the next room. The human slave cook, the only slave in the fortress, is the only one who tries to run & sound the alarm. He has an amulet of protection against lycanthropy. That’s about it. Oh, there’s a great deal of coin, mundane treasure, and magic items scattered about. Ok, now that’s it. Once room has papers that suggest they are allied with the Ogre Lord from the previous adventure, because a fortress full of werewolves isn’t enough evidence.

When The King gets this evidence he does what any good king would do;: ignore it and send a band of idiots to find and kill the traitor. Why send the army, or a band of trusted earls, barons, etc? Can’t be bothered, sorry. This time the map of the fortress looks like a proper fortress with maybe 33 rooms over two levels. There are more features on the map and the various rooms break things up a bit more, although the generally design is one of a great room in the center with many branching rooms off of it. This is the clan headquarters for the werewolves so it’s crawling with them. BOTH of them. Yes, there are only two werewolves in this fortress. There are six human guards armed with +1 bastard swords and +2 chainmail. No doubt they were purchased at the +2 chainmail store. Hmmm, let’s see, two human slaves, a high priest, a succubus, a monk, a stone golem, and a couple of basilisks. A little anti-climactic for the climax of the adventure and for the series of modules. There’s also a kind of fountain of blood, but all it does is look cool. No other features of note or of interest.

There’s no new monsters to speak of, which is too bad because I like throwing new things at the party. There’s a shit ton of boring mundane treasure in the vein of: 1335 gold, 2622 silver, 8 gems @ 150 gold each, etc. There’s also A LOT of magical treasure. lyres of buildings, staves of healing, at least three +1 stat books, stone golem books, resurrection items, a metric ton of magical arms armor. In the past I’ve enjoyed seeing some unique items in the adventure and this is no exception. Necklace of the World, Gauntlets of the Beast, Circlet of Power, etc. I LOVE magical items that don’t come out of a book and these fit the bill. There’s just too much ‘normal’ magical treasure to go with it; it detracts from these new items.

The entire adventure feels a bit … empty? Two giants fortresses and just a few guards in each. The place is overflowing with treasure but nothing much guarding it and nothing much in the way of interesting areas to interact with. No factions within the wolves, no potential allies to interact with … just room after room of hybrid form werewolves.