A3 – Hunt for the Ogre Lord 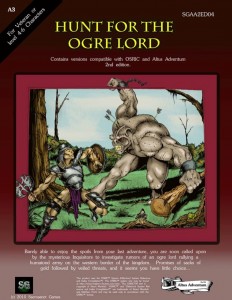 Barely able to enjoy the spoils from your last adventure, you are soon called upon by the mysterious Inquisitors to investigate rumors of an ogre lord rallying a humanoid army on the western border of the kingdom. Promises of sacks of gold followed by veiled threats, it seems you have little choice …

This adventure hits almost all of my favorite things! Railroads! Plot! Training grounds & tests! Humanoids! Gimping the players! Poor hook! Boring rooms! Wait, no, I see what I did there. I accidentally typed ‘favorite’ instead of ‘disliked.’

There’s this ogre with an army of humanoids. He’s attacking the lands of men. King Jerkface can’t send his army to stop them (Surprise, Surprise Surprise! ) so instead he has Inquisitor Beardface threaten the party in to hunting down the ogre and killing him. The party is ambushed and captured. They are stripped and locked in a dungeon. Only wait, it’s not really a dungeon, it’s a test and training grounds! You see, it’s how the ogre lord find new subjects to recruit! But oh, he’s underestimated the party and they manage to escape, get their gear back, and resume their mission! They forge on, fighting hordes of low-level humanoids, until they join a massive battle and kill the ogre lord. Yeah!

If the party doesn’t go to the initial meeting with the Inquisitor then they’ll be persecuted. There’s an overwhelming force of humanoids present to take the party capture including just enough shamans with hold person to screw the party over. In the dungeon there’s a mysterious mist that knocks the party out. If they join up with the ogre then the Inquisitor send werewolf assassins after them THAT SAME NIGHT. The designer comes right out and says “is this railroading? Sire, but it’s part of the adventure plot and this would be short adventure without it.” No, it wouldn’t be. Do you know why? Because all of this bullshit railroading and plot and “the party dies if they try to get off the railroad” nonsense doesn’t matter at all. You see, the second half of the module deals with what are essentially mass combat battles of various sizes as the party help the local outpost commanders and face down the ogre lords army. That’s right, all of that plot and railroading CRAP has absolutely NOTHING to do with the actual adventure. I’m at a complete loss as to why it’s there.

I should probably go in to some details rather than just ranting and going apoplectic. The hook is EXTREMELY POOR. The characters are forced in to participating. This means the players are forced in to participating also. “Go on the adventure or we’ll kill you” is not a compelling hook. It’s doesn’t make the players want to have fun. They end up sighing and resigning themselves to the adventure. In my experience they also rebel. They try to kill the guy threatening them, or throw the adventure in some other way. They almost always pissed off during most the adventure, which they don’t want to be on anyway. Don’t to this to your players. Give them a hook that they WANT to go on. Not their characters but the PLAYERS. The game is supposed to be fun and arbitrarily forcing an adventure on the players in a ham-handed way is not fun for the players.

The party wanders around and find two outposts put to the torch with the guards staked out. They are then ambushed by a huge force of humanoids with the Hold Person Shamans. It’s not clear to me why this has to happen. Rather than setting things up and letting the players explore the outcomes (capture, tricking the patrols, etc) it’s just straight in to the railroad. I’ve yet to see a group of players react positively to having their character choice neutered in this way. If it was me I’d make it my personal quest to now fuck this game over, or perhaps just check out mentally. If you have no respect for me as a player then I have no respect for your game. If what I do doesn’t matter then how about we roll a d6. 1-5 I win and on a 6 I reroll. Then we can go get some beer and watch a movie. Sound good to you? Sounds better to me than where this game is going …

After being degraded and humiliated during a three day journey (Ug!) the party gets knocked out by a mist in their cells! I literally did this in stories I write when i was ten years old in fourth grade. Seriously, the guys in my story were getting knocked out by mists all the time and waking up somewhere else, just like in this adventure. This is not a sign of strong storytelling OR sandbox adventure design. Ok, Slavelords time: the party has no gear and is now escaping the dungeon. They are literally in loincloths and facing monsters like Minotaurs and bands of goblins firing arrows at them. Because having all your shit taken away is great fun for the players, especially when its done in a completely arbitrary way. Why not just say ‘Poof! all your stuff disappears!’ It’s the same thing! The dungeon is completely linear. It even has kayaks lined up on the shore of an underground river. WTF?! It, and the prison level above, are just room after room of bland descriptions with monsters who leap to attack. At the end you learn it was all a test of the ogre lord who wants to recruit the players! Accept and werewolf assassins get sent after you. decline and fight the guards. Joy.

I’m sorry, I can’t go on. It’s too painful. The last section has some mass combats of increasing size. These have at least the possibility of more freeform play with roleplaying mixed in, both with the humanoid armies and the commanders of the human troops. No new monsters to speak of. The mundane treasure consists of boring lists of coins and gems (“5 gems @100gp each, 17,130 ep, etc.) A good deal of the magic items are just plain jane book items but a few are more interesting. A good example is Dissolver, a sword that drips acid, or Skullsplitter, the huge spiked mace of quaking. These are great example of more personalized magic items. They could use a little more descriptive text, but the names and effects are at least fun. Players always seem to like getting a sword named Dissolver with green glowing runes down it that drips acid then they do a +2 longsword that does +1d4 acid damage.

If you are interested in large scale battles then the Castles & Crusades I-series/Vakhund does the whole Sandboxy thing a lot better.

6 Responses to A3 – Hunt for the Ogre Lord