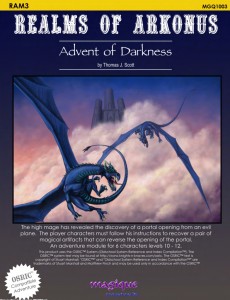 The high mage has revealed the discovery of a portal opening from an evil plane. The player characters must follow his instructions to recover a pair of magical artifacts that can reverse the opening of the portal.

The original form of this adventure, Darkness Rising, was a tournament module at GenCon 25 and Origins 96. It does show its tournament roots but does a decent job of getting past that in places. The world is ending and the high mage needs the players to go on a fetch quest to grab some stuff he needs to stop it. Thus the adventure is in three parts: two fetch quests and the “stopping the end of the world” portion. I’m not a big fan of hooks which involve the players doing good for its own sake. I don’t think that motivates the actual players and takes the out of fun mode. It’s slightly different in a tournament. In that setting almost anything will do since the players are already motivated: they want to finish the module and win. That doesn’t work too well when moved over to home play. “Go save it yourself high mage dipshit; I gotta whore house to run and a POS halfling to murder!”

The three portions of the adventure are fairly distinct from each other. The first part contains a couple of very interesting ideas and one of the worst screw jobs I’ve ever seen. The players are sent to this abandoned village to get a mirror they need to close the gate to the evil dimension that is opening. On the way to the village they keep feeling these little earthquakes that are getting worse. They see a cave. Inside the cave is a slumbering tarrasque. Yes, a tarrasque. The earthquakes? The side effects of a giant slug tunneling towards the tarrasques cave, which will surely wake it when the slug gets there. I frigging LOVE this! Stop the slug or the tarrasque wakes up. I imagine a group of players simultaneously saying to themselves “holy shit!” and then COMPLETELY freaking out when the slug makes its appearance. That, my friends, is roleplaying GOLD. A fearsome monster of legend, an absurd situation, and a group of players totally loosing it. And it has nothing to do with the fetch quest. Tears of Joy.

This section continues on with the party arriving at the abandoned town. It’s full of ghostly figures who ignore and then mutter at the party member. Its presented very well and I think it’s quite the evocative setting and a great place to have an adventure. Weird shadows in the corner of your eye and angry ghostly figures … who can’t really do anything to you. While the party searches the town they are are attacked a few times by a mad cleric and perhaps a ghostly horsemen. The party eventually find the mirror in the basement of some random house (!). A vulture then swoops down and snatches it to carry it away to the graveyard. WTF?!?!?! That’s a screw job worthy of a japanese anime. I have NO idea how the designer expects to get away with that. The party is just standing around with their thumbs up their rear while it happens? It’s crazy, and not in a good way. The town and graveyard doesn’t have much interesting going on except for the harmless ghosts and the crazed cleric. There are some undead, almost all of whom turn as Fiends. I blame Gygax and those dame amulets the skeletons wore in Caves of Chaos. Ever since we’ve since undead who turn at higher levels, all with a variety of bullshit excuses. How about “I’m a lazy designer and felt I should use undead.” Just use something else, or make some new undead creatures instead of just gimping the cleric. By this time the parties cleric should be like a Pope or something and he STILL can’t turn skeletons?

The second section has the party journeying in to a land of eternal darkness and grabbing the second artifact from the giant leader. Essentially there’s a small fortress in the middle of a small village full of evil guys: goblins, gnolls, ogres, and drow. There’s a short little event at the start of this section which sets the party up for entry. There’s a whole ‘turns out the princess is evil!’ situation where the party sees some people attacking a caravan. Beyond throwing the party the one method of entry (using the caravan) it’s a wide open sandbox. The village is presented, he fortress is presented, and the reactions of the various groups within when they discover the party is noted. This is a pretty nice setup. The party has a goal (get the artifact) and he environment is presented (the village & fortress.) The various groups within are outlined, how they interact with each other and how they react to the parties presence. And then … the DM is left to run the thing. I really like how this is presented. There are truly A LOT of of creatures in the camp and a general assault is going to be rough … MAYBE doable for a 12th level party, maybe not. The entire area is a little bland, as are the interactions between the various groups. A few more real factions within the camp would have really smartened up this part of the adventure. The evil camp is also just a tad bit too organized for my tastes. Things go off a little well and the various humanoid hatreds are not played up very well. Good base concept with a kind of generic execution.

Part three deals with the inevitable betrayal of the high mage. What?!?! I know, it’s shocking. The high mage betrays the party and jumps through the portal to the evil realm. This parts starts interesting enough; there’s a lake with some demons playing in/around it and some clouds up in the sky with a fortress on it. After making their way past he water demons and the dragons in the clouds the party gets to explore the cloud castle; home to a demigod. There are only ten encounters in the castle and the party is likely to encounter 80% of them given the layout of the castle. Trudging to the end the party should find & kill the high mage, ending the adventure. Tournament module encounters usually have encounter set up in which the party can avoid the encounter or fight a monster. This module section falls neatly in to that style. A smart party will find a way to bypass things and neuter the high mage quickly. A silly party will fight monster after monster.

The last part of the module is the one that most resembles a tournament module and thus the most unsuited for home play. The first section has some interesting ideas, and the second is a huge sandbox problem. As a tournament module it would probably be fine, especially if the middle section was excluded. As a home play module the last section still has too much of that tournament feel. Expanding upon the castle would be necessary.

1 Response to RAM3 – Advent of Darkness