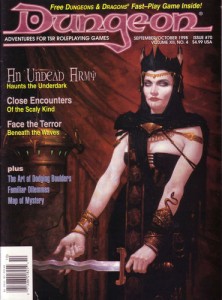 This issue of Dungeon is worth seeking out.

This is trying to be good, but six pages for three encounters is pushing my tolerance for text. There’s a talking ogre who negotiates, a haggered woodsman in thrall to a dryad, and some magic stepping stones in a stream. There’s also some flamlings that talk and interact. Very short, but it’s also got a nice OSR/folklore vibe going, if you ignore the comedic opening with the old wizard setting goblin butts on fire.

This underwater adventure is an attempt to build around a Morkoth. The leaders of two underwater communities have gone missing. Signs point to an area known as The Maze of the Morkoth. Hmmm, wonder what could live there? There’s a handful of encounters, the most boringly described underwater city ever, and some generic twisty tunnels that lead to the Morkoths lair. Lots of words in this one. LOTS of words. Not much content. A seashell chariot pulled by seahorses and a chick riding a giant eel in a saddle are the highlights … both at the beginning. The city has things like … empty streets. Uh … Why describe it then?

Side Trek. Hill giants throw rocks at you while you cross a rope-like bridge. Not a terrible set up, even if it is a set up. The cave they live in has a 6’ crystal status, magic plate full of the last wearer scattered about in pieces, and a tapestry wall made up of scalps. Cool treasure!

A decent bit of adventure. A swamp, a lot of hostile lizardmen, and a fort with some humans trying to outlast the lizardman siege. The big to do is that the fort folk ae almost all dopplegangers and ONE member of the party may know about it. They have some eggs, and there’s a wizards tower with a trapped demon, and a final siege … oh boy. That’s a lot going on and I LOVE IT when there’s a lot going on. Maybe a few civilians or not everyone in the fort being in on it would improve things a bit, but that’s a minor quibble. There’s a railroad or two also, and again that’s a pretty minor thing. There’s good atmosphere in the swamp, weirdness going on, a desperate siege, several factions in the lizard men. This one stands head and shoulders above the vast majority of Dungeon adventures.

This lengthy underdark adventure is easily one of the best finds in Dungeon. There’s an army of ghouls down below and their rampaging is forcing the other residents to flee or, uh, “join.” While lengthy it doesn’t seem like a long or verbose read. That is, no doubt, a testament to how interesting it is. Baur does a good job retaining focus. Each of the encounter areas is short but quite punchy. The flavor of each area is well communicated and after reading it your mind wanders to the possibilities present. In many Dungeon adventures you’ll need to take notes. In this one you’ll WANT to take notes to get down your fevered ideas as you wander through the text. There’s this weird byzantine feel to the ghoul leadership. “Murliss, Lady of Worm, True Ghoul Marquiss” If you’re not thing Xerxes at this point then you’re not really a living and breathing person. The underdark presented in this adventure is more weird, or maybe baroque, than in any other version I’ve seen. D1-3 was weirdly generic and maybe a bit more adversarial than I would prefer. The modern versions, most recently in the latest WOTC offering, is strangely “generic fantasy” and mundane. This version brings the weird, which was no doubt the point as Clark Ashton Smith is frequently referenced throughout the adventure in offsets. There’s a weirdness of the language that I assume also comes from the Smith influence (I was always a William Hope kind of guy and never got into Smith, so I’m not sure.) In this way it bears a resemblance to the better DCC works of Harley Smith. The casual off-hand name dropping of weirdness, with no further explanation offered … it’s present in both works and tears at the fevered imagination. You can talk to almost everything, for better or worse, and there’s thing done where the zombies are used as a resource. A walking food supply or a zombie raft. Normally the magical ren faire and/or magic as a substitute for technological drives me nuts and I hate it. In this though it’s wonderful. Weather it’s because of the restraint shown or perhaps because of the taint present, it makes sense. I’m not sure there’s a throw away encounter present. Each one contains just the seed of an ide, but what an idea!

It makes me sad when I compare it to Baur’s recent WOTC work and how much crappier it was. None of the splendid mystery of detail that is present as it is in this adventure. Hoard was boring and mundane. This is fantastic and wonderful.