Fight On! #13 – The Fungus Forest and Mold Falls 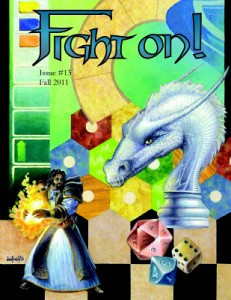 I’m working my way through Fight On! magazine reviewing the adventures. Fight On is a great magazine that reminds me a lot of The Dragon or White Dwarf from their early days. It’s full of interesting little articles and tables to get your imagination going. I’m particularly fond of the adventures in this issue, as well as the Goblin Market tables. This is a great issue to pick up if you’re testing the waters.

The Mysterious Laboratory of Xoth-Ragar
by Alexey Fotinakes
Level 3 characters?

This is a two-level crawl in an old wizards home and laboratory with about 16 keyed encounters on the first level 13 or so keyed encounters on the second level. It seem ol Xoth-Rogar had a few strange theories about the nature of evil and set about confirming them … to the usual result. This leaves us with an adventure that in some ways resembles a cross between The Thing and Aliens. The wizards home is a bit of a mystery as the party stumbles upon clues to what he was up to, while dodging weird gooey organic matter and The Beautiful People. What’s interesting is, except for a single small encounter on the first level, The Beautiful People only show up as wandering monsters. The second level is much the same, sparsely populated with one ‘module theme’ encounter. The rest of level one and two is populated with a small variety of vermin and ooze and a trap or two. The entire place has a strange slightly otherworldly quality to it that I grooved on. There’s a puzzle/trap or two, which are very obvious so more puzzle than trap, and a decent variety of strange things for the party to encounter. Weird texts, magical pools, strange but harmless effects to trigger. Oh, and a giant cavern-sized abomination. That’s a good way to end the adventure, but it needs a bit more lead-up to be truly effective as a boss fight. There are some ‘module thee’ monsters on the second level, the DM would drop some hints with both them and The Beautiful People on level 1 that there’s a horrible boss somewhere. That kind of build-up help avoid the boss seemingly appearing out of nowhere. IE: The Lareth the Beautiful Problem. The treasure is mostly on level two and while the mundane treasure is great (even the pp get a good description) the magic treasure is straight out of the book. That’s disappointing; there’s a great opportunity here to include some unique items. This would be a great adventure for a weird fantasy campaign or for a night or two of fun. The bizarre circumstances and environment of the house (glowing particles in the air, weird organic sludge, etc) should make for a memorable adventure with the party either apprehensive as hell or scared out of their minds. Just the way they should be.
Slaughter in the Salt Pits
by Gabor Lux
Level 4 characters?

This little adventure covers ground that many other do however it does seems to do it in a more … realistic? fun? way. Orthil, and its salt mine, has been taken over by thugs. It’s now essentially a company town with a portion of the population pressed in to service. Oh, and the cemetery raided for bodies to animate. The coercion here is more subtle than in most adventures and perhaps that’s why it appeals. It’s a small little sandbox or village, mines, salt pit, and bad guy keep. There’s no hook presented in the background paragraph, it’s more of a setting in which the party can find themselves. The EHP asserts just enough control over the village to get what he wants: workers. He uses this to get other things he wants: money. The various encounter areas (maybe 35 in all throughout the four areas) mostly present a realistic view of guards and slaves. There are a few of the weird and idiosyncratic things I’ve come to associate with Lux: a crusty lake with a secret, idols to be avoided, and so forth. The mundane treasure is finely described (golden tableware, silk undergarments, etc) however the magical treasure is a bit of a disappointment. There is too much “mace +1” and “potion of healing” and not nearly enough “ivory rod that turns in to a snake when thrown” or other interesting magical items. The undead and human contingent again make this a fine weird fantasy adventure, or a great small sandbox place for the party. Perhaps they encounter the town again and again, and eventually do something about the EHP oppressing the villagers?
Fruiting Towers
by Patrick Wetmore
Level 5 characters?

I love a creepy and otherworldly location and this adventure delivers. Along an old highway is a hill of scaled stone with some small stone huts on it. Bandits usually take up residence in them to use as a base for raiding but soon disappear. More recently a wizard who has split himself in two (magical log-saw of longevity or some such …) has taken up residence and is now at almost at war with himself because a bunch of his loot has disappeared. The structures are, of course, part of a large creature that lives underground. There are 35 or so encounters scattered throughout two locations: the ‘village’ above on the hill and the structures in the belly of the beast. The party has a couple of factions to deal with: the two halves of the wizard don’t trust each other, there’s a prisoner, each wizard half has his own weird guards, and then there’s the minions of the giant space creature who roam around inside its body. Parasitic ringworms, flapping antibodies, mineral gatherers, plasmoid defenders … the party is in for their own Fantastic Voyage. The entire interior of the creature is a bizarre landscape full of bizarre creatures, some hostile and some which can be ignored. There’s a decent amount of ‘book’ treasure in the creature as well, most of it coming from the wizards stores that have disappeared. With location names like “South Digestive Tower” and “West Reproductive Tower” you know the party is going to in for a strange trip. The whole adventure is full of weird biological … things … for the party to explore and play with. “Gee, I wonder what happens when I hack up this nerve cluster?!?!” *hack *hack* *hack*. There’s even a great little section on the aftermath of the parties encounters. One outcome involves a giant stirge with a 50′ wide feeding tube. Ouch! Well worth looking in to and running.

Tale of an Egg
by Baz Blatt
Level 4 characters?

This adventure, for Stormbringer or D&D, could almost be written for an indie RPG. I’m not sure if that’s a compliment or not. It certainly has more atmosphere than the vast majority of dreck written for RPG’s. This has to be the Stormbringer influence. What’s a railroad to me & you may be called a scene in an indie rpg. The basic adventure plot is that the party is hired by an enigmatic wizard to go get some egg shell parts from a dragon turtle nesting ground. The party has to get there (sea voyage scene), gets delayed in a city (fun with foreign culture scene), trek overland to the beach (wilderness survival scene), deal with the Burning Man like scene on the beach (play nice with others scene) and then the actual egg hatching scene and its aftermath. There’s A LOT of latitude in those scenes though, so while it’s true the party has to be get to the location and do the job, the sites are really just a bunch of mini-sandboxes for the party to play in. The city and beach scenes are the ones that grab me the most. In both os these the party is interacting with a diverse and foreign set of cultures. The city get maybe one column of text in the adventure … and it paints one of the best portraits of a foreign city EVER. The culture is bizarre, the city inhabitants little more than thugs, and the couple of examples of encounters do a FABULOUS job of communicating the cities vibe. The beach scene is crazy. The party arrives to find something akin to a Burning Man festival set up for the eggs, after expecting no one to be present. There’s also a tribe of baboons nearby that are intelligent enough to interact with the party and that are, essentially, the mortal enemy of the festival goers. When the turtle shows up to lay its eggs an all out apocalyptic battle between the festival and the baboons starts up, with the wizard adding in his own thing. This thing is CRAZY in the way only Strombringer could be. And it’s simplicity itself to use it for D&D. Great adventure.

The Darkness Beneath Level 11 – Fungus Forest and Mold Falls
by Makofan
Level 11 characters?

This is another VERY strong level of the community megadungeon. I’m partial to mushrooms, slimes, and vermin in my adventures so be forewarned: I’m a fAnBoI of these elements. The adventure takes place in a cavern 100′-200′ high and is stuffed FULL of mushrooms. 60-70′ feet high and 5-10′ in diameter make up the mainline, with a canopy grown together. Then there’s a second line about half that height, and then another set waist high and more under foot. The place is STUFFED and they come in all different types and colors, some glowing, etc. There are great supplemental tables for the DM that list mushroom effects and color variety. For example, instead of brown you could say bole, umber, chocolate, tan, etc. That’s the kind of DM assistance table that I really appreciate. It provides assistance to me in helping flesh out the adventure and make it come alive. Besides The Canopy there are four other areas of the caverns, each of which has their own wandering table and maybe 15 general encounter areas in the caverns. The fungas gardens of the trolls, the plateau of the mantis folk, the mold falls or enclave of the fungents, etc. There’s a WIDE VARIETY of things going on down in this chamber and the place is stuffed full of factions for the party to interact with. Almost everything will talk to the party. And there’s beholders! A LOT of beholders make up one of the factions. This place is frigging wet dream for you if you like slimes, molds, and fungi. Hmmm, well, ok, maybe not … but it is a GREAT location. There’s a HUGE variety of new things to hack, almost four pages worth with 11 or so entries per page. This is indeed an alien & bizarre place! My only complaint is that it’s not 99 pages long and that the treasure could use a little touch-up. Most of the mundane treasure is of the “20 gems worth 10,000 gp” variety. I wish there was more detail and variety there, although I personally keep a notebook page or two at hand with pre-gen jewelry, gems, and goods to combat this. Most of the magic items are just plain and simple book items. There are a few exceptions: some gonzo items and, notably, a suit of chainmail that prevents you from being hit unless the DM rolls a 19 or 20, in which case you take triple damage. THAT’S the kind of magic items I like to see in adventures. There was also an opportunity lost by not including more slime, mold, and fungi based items. Overall though this is an environment your party will not soon forget and great addition to the megadungeon. They could play down here for MONTHS, or just make a quick trip over the slime falls to the next level. I’m a big fan of most of The Darkness Beneath’s levels, but this one ranks up there as one of my top 4 favorites.

2 Responses to Fight On! #13 – The Fungus Forest and Mold Falls