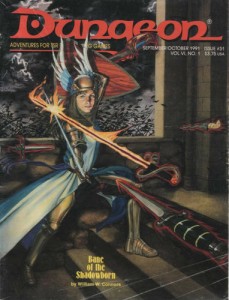 Yeah. After reading the first adventure, and on the heels of the last issue, I was going to title this “Dungeon Magazine: We’re no longer picking submissions for inclusion at random.” Then I read the others. A cold mess and a railroad. Oh boy.

This is a nice little adventure in an abandoned city full of undead. As was the style at the time, it’s got WAY too much text and backstory and it goes over the psionics rules in detail, all of which detracts from the adventure. It’s got a nice little ‘village in trouble’ introduction with some good NPC’s to interact with and a realistic set up. It then launches in to the core of the adventure. The party goes through a teleported to a weird alien-like city. Therein they meet some of the intelligent undead inhabitants and a wizard. Some of them are friendly, some could be friendly, and, of course, there’s a big bad guy. This thing has two components that make it worth checking out and maybe running. First, it’s got great NPC’s. Some of them have a little too much text describing them, but they all seem to be real people (even the monster NPC’s) and a purpose behind them. They respond intelligently, and not just in a “they attack!” manner. It’s got a great locale, in a pyramid that houses a city, and the entire thing feels like a real place. While the hook is a little hokey, with a wizard going missing and a friend looking for him and hidden psionic powers (that have almost no impact on the adventure) there’s also a nice bit about how the village reacts. Not the usual sheep! The description of an undead attack on the village, and the realistic way in which the undead react to Turn, struck me as very nice also. Nice, solid advice with some good imagery associated with it. A kind of mix of realism and fantasy and flavor that makes you want to run ALL of your undead that way. These sorts of bits are scattered throughout the adventure and they contribute a great deal towards the positive feelings I have. The MASSIVE amounts of text makes this hard to recommend very highly, but if you treat this kind of a short story, to take inspiration from while jotting down notes, you’d have a great adventure.

This is a desert adventure in some ruins. Someone has gone missing from one tribe and you’re sent to find them. Turns out they’ve been abducted by some Set cultists and an evil efretti. This thing is dense and doesn’t have enough summary. There’s not a really great way to tell how everything works together in the abandoned city and the cultists don’t have any notes on how they respond. This thing is just a mess, with monsters, cultists, intelligent, beasts, many many sub-areas… there might be something here but I can’t figure out what is going on. The ruined city is just a mass of encounters that don’t seem to fit together in any way other than “we’re in a desert!” The compound of the ruined city has a bunch of buildings and each building gets it’s own little mini-encounters/dungeon set up … but they don’t really work together or fit together … or at least it’s not obvious how they do so to me after three readings. I know there’s this amulet, and guardian who used to be someone important, and an efretti … but that’s about all I can make out.

This is a slow little adventure about a village with a local legend. Every nine years a spirit takes 3 young men. There’s a village with a great map, but only a VERY small number of the villagers are described. This turns the adventure in to a kind of railroad. Where NPC1 leads you to #2 and then #3 and then to the monster. The lair is only three rooms and while it has a great entrance mechanism (boulders shoved aside give the creature warning) there’s not really enough in it past that to sustain play. The hook here is pretty good, or perhaps I mean the introduction. There’s an inn, fully booked, a farmer takes you home to stay with him, and his neighbors son gets killed that night. It’s a nice kind of bonding sort of thing to get the players involved with the guy and interested in him when his neighbor starts having trouble. It’s handled much better than most adventures, and doesn’t SEEM forced, even though it’s obviously contrived by the designer. The inclusion of a wise woman with local knowledge of the legends and lans is a nice touch, but could have perhaps used a bit more flavor; the wise woman eventually tells you where the lair is. REALLY not much to this one, but still very nice. It reminds me a bit of the troll home in 100 Bushels of Rye, one of my favorites.

Bane of the Shadowborn
By William W. Conners
AD&D-Ravenloft
Levels 6-9

Do you like gladiator movies? Err … I mean railroads? This is a stupid fucking railroad. Worse than that, it’s ALMOSt like you’re watching a movie. Not quite as bad as some of the 3e/4e movies, but pretty damn close. The party gets teleported to Ravenloft, to a manor home. Instead os exploring and having fun, a good spirit and bad spirit lead you around and fuck with you and drop hints in your lap and railroad you to a finale. It’s about 80 bajillion pages long and you can’t do anything but “enjoy” the scenery. It might as well be scene based for all the “exploration” and “choices” you get to make. “You have done well my chosen ones” and “Lady Shadowborn, in an attempt to warn the party of the dangers ahead” and “Ebonbane has decided to put on a show here for the explorers” and “Ebonbane then beings to taunt the party” and …. You get the idea. The rooms are an excuse for the NPC’s to screw with the party, for good or ill. And of course it’s all combined with that dripping melodrama that is Ravenloft Boxed Text from this era. I get what they are trying to do here: two spirits duking it out, but it’s done in such a heavy handed style, which is then combined with enough WALL OF TEXT to rival anything in China, that all it ends up being is a mass of text that doesn’t work together and random shit being inflicted on the party. And not in a good way. Not in a ‘neutral’ way that OD&D works with, but in Deus Ex kind of way that repulses me.