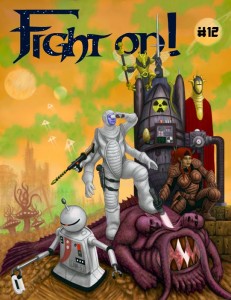 I’m working my way through the various issues of Fight On! magazine, reviewing the adventurers. The non-adventures portion of the magazine is great. In this issue there’s an excellent science fiction space opera adventure, the rules for the RPG “Champions of Zed” which recreates Arnesons rules from the early 70’s (And is now in Kickstarter mode) as well as a host of other articles to get your imagination going and jump start your start your heart. Every DM should be able to find something in every issue to help their game be more imaginative and interesting.
The Darkness Beneath Level 8 – The Deep Caves
by Heron Prior, David Bowman, Calithena, & Simon Bull

The Darkness Beneath is a megadungeon presented one level an issue in the magazine. Almost without exception the levels have been imaginative and have explored a wide variety of different areas under the earth. This one, uh … does the same, I guess. You see, out of nowhere the FO guys have given us a new Underdark setting. This issues level is actually a kind of gazetteer to this new Underdark, spread out over 25 glorious pages. This level is a cave system 72(!) miles across and filled to the brim with adventure seeds and locales that more than satisfy my desire to see the idiosyncratic and whimsical.

I was never big in to the world of 2E so my own views of the Underdark are essentially that of the D1, D2, D3 series along with a smattering of D&D pop culture references since then. My own perception of the published material has been of a Drow-centric environment with scattered pockets of other creatures: a beholder cave here, Kua Toa there, some Aboleth in that lake, and so on. The underlying message I picked up was: Drow as the main inhabitants and everything else just a sideline. It also wasn’t that strange. Other than a brief opportunity (lost?) with the Kua Toa and the wandering tables for the city in D3, is just wasn’t that weird. The Underdark presented in this issue ain’t NOTHING like the one I grew up knowing, and that’s a very good thing indeed.

This section is 72 miles wide, in 2-mile hexes, with about 26 different ‘things’ described out in five different areas. In this respect it’s much like a hex crawl in a fully developed region. There must be, I don’t know, like a dozen different factions present in just this section. That’s A LOT of social interaction and exploring for the party to take advantage of and experience. Dark Trolls, constructed ‘Puppets’, The Mourners, the Necromancers, nefarious temples to strange gods, goblins tribes, dragons with problems, and of course, a weird ass trading city full of strange things and people. The brief description of the city in D3, along with the wandering tables, was perhaps my favorite part of D3 and I’m happy to see that aspect carried on in this level. As for the rest … I’m not sure how to describe what’s going on here. Fungas forests, dinosaur wildlands, adventure seeds everywhere, wandering monster tables for each section, various other tables for exploring ruins and finding strange artifacts, this place is just cRaZy good.

Most of the encounter areas are just a paragraph or two that describe the general flavor of the area, in the grand tradition of most modern hex-crawls. Two are expanded upon as full fledged adventures: The Siren Temple and an adventure with the necromancers Bear & Toad. The Sirens Temple has the party digging in to a 26 room three-level temple structure being corrupted and slowly turned in to a kind of killing device. It’s full of things like giant white spiders, curtains of flies, and troll parts in jars. The adventure is a bit low on magic items and cash however the mundane treasures are interesting enough, even if the magical items amount to +2 arrows. The necromancer adventure is really just working for one against the other, or playing the two off against each other. Profit! There are quite a few interesting magical items in this one … most of which have strong characters and interesting stories, effects. This is exactly what I’m looking for in a magic item, the good with the bad and interesting enough that the players want to hang on to it and use it even when they get other items.

This one part level could sustain play for months of real time as the players move from place to place and the DM sandboxes his way to a ongoing story just within this cavern. It’s just as good as the best traditional level published, by David Bowman, but in a completely different way. Good Job gang! This alone is more than worth the price of the magazine it appears in.