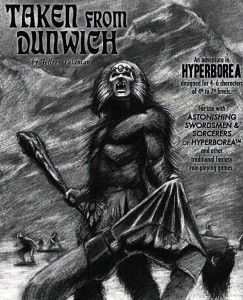 Fair Warning: I dislike AS&S, and the convention game I played in by the designer was the worst I’ve ever played in my life. I enjoyed a toon game run an 11YO girl who never said anything unless continually forced by her mother. I’ve enjoyed railroads of the worst type, and games in which the DM just ran everything and favored interacting with his wife/NPC over the paying players. I enjoy meetup games full of the dregs of gaming society with the worst odious personal habits. I even enjoyed 4E games … but not my AS&S game run by the designer. So .. yeah … maybe you’ll like this. Hopefully I’ll give you enough information to device for yourself, with a minimum of my usual hyperbole. BTW: if you want in on the AS&S kickstarter then let me know; I’ll let you have mine.

The world here is a strange mix of lovecraftian and Howard. At least that’s what I think it’s supposed to be. What it comes off as is one of those grand 2E societies that I dislike so much. Everything comes off as bit too rigid and a bit too explained. I’m not quite sure why that is, so I may be mixing up my con experience. I think what leads me to that is Talanian attempt at High Gygaxian. There’s a lot of the writing style that is a just a major turn off for me. It’s not the thesaurus but rather the kind of convoluted attempt to introduce the thesaurus. “if questioned about the corundrum” and ” he confirms that he paid out 2,000 gp to a trio of huntsmen …” and “it is assumed that the party will (in some fashion) utilize the intelligence provided by the boy, Brin.” It is this type of overly convoluted style that is a turn off. I’m not sure if this is an attempt at High Gygaxian or his own style, but I CAN’T STAND IT. I love the 1E DMG. I don’t have a problem with High Gygaxian, but this language is killing me. Worse, it doesn’t really do any good in painting an evocative environment; it just comes off as needlessly obtuse, almost like a search and replace was done.

It’s combined with an overly descriptive style. People are described as carrying an unshod staff and a falcata. The wandering monsters get tedious descriptions that add nothing to them: “Deer, Red: Deer with red (summer) or grey (winter) coat that stands three to four feet at the shoulder and weighs 250-350 pounds. They flee from most everything, though a cornered hart can butt with its antlers[stats].” That description adds almost nothing of value to the adventure. Rooms are worse. Every single rooms dimensions are described in its first paragraph, along with its old name, which is described. For example: “this 40 x 40 foot room with arched 25-foot ceiling was once a bedroom (a room in which people laid down to sleep at night, generally for 6-8 hours depending on the individual.)” Ok, that’s not totally a real example, but it is representative. If you’re gonna pull out your High Gygaxian to give us exact one word descriptions then why the hell are you also then giving us a definition of what that word means? This all feels like padding.

Why would padding be needed? That’s an easy one, because even though there are only 15 encounter areas, almost completely linearly, the module is 16 pages long. The only wandering monsters given are the wilderness ones which are innocent enough; animals, vermin and a giant, but the dungeon proper has no wandering monsters. And why would you need wandering monsters when all you have is a linear hack-fest? Each room has has an overly long and detailed description, generally with a monster in it that attacks immediately without mercy or quarter. That’s not an adventure but rather “rolling dice”. How about w do away with it and instead everyone just roll a d6. On a 1-5 you win the adventure on a 6 your character dies? The party will find no allies in the dungeon, and will find not interesting things to play with and explore. Oh, there is a detail or two: compressed krill bars, light panels, etc, but nothing truly weird or idiosyncratic. This is strange since the adventure involves a spaceship and the Great Race of Yith. There are marvelous opportunities with those elements to have some truly bizarre and interesting things go on. A few book magic items, a few gems, and a flashlight are all the party is likely to get out of this adventure. There’s only one new monster, the boss, that is in any way interesting.

The dungeon is linear and the text overly wordy. Despite this, the setting is not evocative and there is little of interest in the dungeon except hacking creatures. The Ronin Arts adventures are without a doubt the worst I have ever seen. This isn’t that bad but it’s not a whole let better. It feels forced and boring.

1 Response to Taken from Dunwich