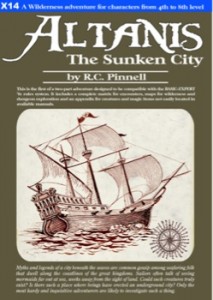 This module most closely resembles a small wilderness area adventure with significant opportunity for exploration underwater. As a framework, its generally missing the detail that accompanies a location-based encounter, and further work by the DM to expand it will probably be needed.

Legends and rumors whisper that somewhere, many days from the coast, lies a sunken city. Who built it and why are a mystery. The rumors conflict with each other, but all agree that a vast amount of wealth awaits under the waters for those bold enough to claim it!

This is a follow on adventure to module X1 – The Isle of Dread. Like that module this one involves a journey to a group of islands in search of treasure. The Kopra make an appearance as well, further tying the two modules together. Dread focused quite a bit on the journey to the island and then the exploration of the interior. This module glosses over the journey, and the island exploration portions are much smaller. It’s quite likely that the party will spend a significant amount of time underwater, and there are some rule clarifications to help the DM deal with that. There’s also an overly-long backstory.

The hook here is quite light, and rubs me a bit raw. It starts with rumors in a bar and an old man offering information. It also involves each character rolling the dice with the old man and almost certainly (14 chances out of 18) gaining a permanent boon to an attribute or the like. While I like that sort of mechanism in a dungeon I certainly don’t like it in the introduction. In the dungeon it feels like a reward for exploration and taking chances, like drinking from a magical pool. In the introduction it feels arbitrary and unearned. There are no details for the journey to the island, the DM being encouraged to consult the Expert rules if they want to play that portion out.

The primary adventure is played out on a sunken plateau with three mountain peaks/islands poking up, creating a triangle like area between them. The area in and around the peaks is quite shallow, particularly during low tide, from 2-4 feet. There are a variety of statues in the low-tide region as well, along with some geysers that can erupt. The geysers provide a small environmental hazard however the status play no part. The islands have some very small ruins on them and there are two Kopru caverns on them. The Kopru caverns greatly resemble those in Isle of Dread in form: terraces, mud pits, etc. The only wandering creatures will be giant sea life: crabs, barracuda, sharks, stingrays, eels, snakes, etc.

The set encounters generally involve fantastic sea life: hydras, an octopus, squid, sea dragon, etc. There are two or three potentially friendly encounters as well, at least one of which should provide some clues to the PC’s of the whereabouts of the sunken city (the second Kopru cavern.) The encounters are generally straight forward, with one or two showing the seeds of something interesting: mud-pits with creatures lurking in the bottom, statues with curses, etc. All in all though, the encounters are generally not greatly evocative or interesting. There are more than a few non-standard magic-items. These don’t fall in to the weird/unusual category, but they are are more than standard book items. A sword with a larger bonus to certain sea creature, a variety of rings with minor effects, etc. The most interesting is probably a magical helm of underwater action/breathing. This BEGS for weirding things up, but the opportunity is lost. The sunken city is largely not described and in ruins, with little detail provided.