Temple of the Ape 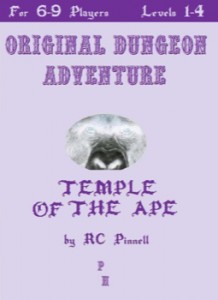 Tales of a tropical paradise! Beautiful native women! Mountain full of precious stones! Rumors of being torn limb from limb by bestial guardians are but a minor worry when the rewards are so great!

This is an OD&D module and appears to be a designed for introducing new players to OD&D play. As such there’s a four page section at the beginning which describes OD&D to the players. It begins with “You are about to take a tip back in time. The machine that is going to allow this is your own mind and ability to imagine.” It then goes through something similar to describe the three core classes, with another similar section for the DM. The DM section does focus on the mechanically different systems in the Little Brown Books, as compared to newer games, where ‘new’ is define as everything that came later, including the Greyhawk supplement. This goes so far as to suggest the module NOT be adapted to other rules sets, in order to preserve the LBB experience. Or, rather, the authors LBB experiences …

The background and introduction are about a page long. This is right at the edge of what I prefer, and in fact it might be about right given the larger font used. The starting section is brief, noting that the players journeyed to the isle by boat, were rowed to shore, and dropped off by the crew. The section finishes up with a suggestive Betty Page-like beach illustration. This is the second time the author has included something suggestive in a product. I approved then and I approve now. There’s room for all types of art styles in an OSR product. I also thought the Book of Erotic Fantasy was quite tastefully and well done, so go figure. In any event, the 70’s are alive and well, thanks in part to the author.

What follows is a trip to a village of beautiful young women, with no male villagers present at all. Hmmm …. The party should pick up on the clues and after  talking get moving toward the Valley of the Bones and the titular Temple of the Ape. To get there they are going to have to run a gauntlet of wandering monsters. I count a minimum of a 46 hex journey, with a 33% change of a wandering creature in each hex. Wanderers include 1-2 trolls, 1-2 hydras, 1-2 wyvern or minotaurs. A cockatrice, basilisk, medusa, or 2-12 ghouls, among others. The table is suitably old school. The tables are SUPER deadly for a party of 1st-4th level characters. I generally approve of that, but there are SO many encounters likely that I’m not I’d run it as written. In all likelihood the party will meet 10 wanderers, and I don’t see a party surviving that, even if they choose to run away or hide each time. The replacement character boat ferry is going to have to be very strong, logistically. It should also be noted that a second village is located  on the way to the temple, one of young maidens, but it has no detail at all. It’s almost as if an entire section was accidentally left out.

The temple proper is a short twelve room affair. The map is interesting, aesthetically, however not in an exploratory fashion. It’s just too small to offer a full range of exploration options, with side hallways, ambush routes, and passes to cut people off at. There’s a magic pool or two for the players to drink from, and some new monsters, however otherwise the temple is pretty straightforward … with a lot of deadly opponents.

Is this a good example of LBB adventure? I started with Holmes in 79 so I don’t know. There are at least three elements here that seem to relate. First, the magic pools are a classic element of old style play. Exploring something that could kill you or give you a bonus is a class element. Secondly, encountering new creatures is a good example as well. In the beginning no one had yet memorized the monster manual so everything was new, and because of that every creature was scary. Third, the set up is a decent old school one. There is a certain bizarre nature to a tribe of beautiful native women, bettie page lookalikes, ‘protected’ by giant apes in a village without men. That sort of original thinking is something that I fondly remember from my early days, before dungeons and adventures became more standardized. It’s not a megadungeon, there are not non-standard magic items, the slime/ooze/vermin quotient is low for my tastes, and there’s not quite enough for the party to explore, all of which are qualities I attach to classic play style. It is, however, suitably different enough that I plan on keeping it and running it.