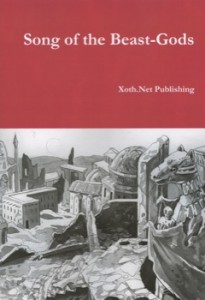 A Pathfinder module that attempts to invoke an old school Sword & Sorcery feel. The kick ass cover and name are a bit let down by the contents.

What’s this … a Pathfinder module review?! Indeed gentle readers, but not just any old module …  a Xoth.Net module. These folks have a reputation, from this product and the Bride of the Spider-God book, for publishing old school adventures. Let’s see, shall we? It’s going to help if you imagine those cities and towns from the first Arnold Conan movie while reading the review.

This adventure has an egypt-like setting and centers around the attempts of a beast cult to bring their fallen religion back to the forefront by turning a group of their followers in to beast-men. This effort is being led by a group that has infiltrated the palace.

The module has a bit of a non-standard organization. It describes four separate areas and then describes how those areas can be used to run an adventure. This particular style tends to pop up most often in city adventures: you get the city described and then you get some plots with advice on running them in the city. This tends to create a very open-ended type of adventure and encourages sandbox-like play, which also means, of course, that the DM needs to put in no small amount of effort to flesh things out.

The first section described is the hook. While traveling the players run in to a slave caravan with some beautiful, and scantily clad, female slaves in tow. One of the slaves signals the characters to rescue her, with the implication that the party fight the caravan. This immediately triggered my anti-plot defense system. What if they don’t rescue her? They can’t buy her from the caravan? etc. My fears were largely unfounded though for in the rear of the module there is that nice little section on how to run the adventure. It goes in to a small amount of detail on how to proceed if the party ignores her; essentially reintroducing the adventure in the next city through slaver raids, rumors, and the like. This was a nice surprise; after expecting a railroad I instead found a helpful bus & taxi guide for day trips and further excursions.

The third section is a description of the royal palace. The party will end up here either quickly if they rescued the slave girl, or slowly if they took the bus & taxi route. The king is old & tired, the advisors are corrupt and plotting, and the party gets to stay as ‘guests’ of the palace. During this stay the party should get a chance to interact with the various NPC’s in the palace and perhaps stumble upon the secret tunnels, as they explore or try to escape. The palace has about 40 or so keyed entries, but that’s not as important as the NPC’s. These sorts of things live or die by the NPC’s personalities, and these just don’t cut it. There’s not enough going on beyond the main plot to sustain things. Reference is made to the various courtiers being held in check by the subtle influences of the core villains, but we get no details of those those courtiers. This would have added an element of factions that could have provided quite a bit more role-playing opportunity. There are a couple of other notable things. First, there’s an absolutely wonderful table that describes what the courtier is up to in the courtiers lounge, if one is present. “Sleeping with jewelry on a nearby table”, “Beating a slave”, ” Counting money”, “make love to a female (75%) or male (25%) servant”, “Being blackmailed”, and so on. That kind of detail is GREAT and screams both ‘old school’ and ‘massive opportunity for roleplaying fun.’ Second, it displays the travesty that the thief class introduced in the Greyhawk supplement. Yes, that means skills. For example: If you make a DC 17 check in any Knowledge check then the Scribe regards you as an intellectual and will be friendly to you. GAH! ABOMINATION! ABOMINATION! I suppose roleplaying it out would be too much to ask? Then again, this IS a Pathfinder module, and that IS a part of the modern game. But it’s not old school, not in my mind.

The final section describes the cultist tunnels, entered through the Palace or the Sphinx. The map is small, with only 15 rooms, but it’s good for it’s size. About half the rooms have a second entrance, so it’s a bit of a looping map design, especially for it’s size. This is great since it allows the party to bypass some areas, set up ambushes, and be ambushed. There is not enough weirdness in it for my tastes, but there is a well done statue trap and one nice environmental issue to deal with. Otherwise it’s a bunch of mostly empty rooms with not much going on in them.

There’s a page that follows the offers advice on how to use the areas to run the adventure. I already went through the hook section advice that given, however there’s a lot of good, and terse, advice on how to run the adventure in the palace and how to run the climax of the adventure, a human sacrifice in the tunnel section. What’s missing here is a general timeline of events. There IS some sense conveyed in this last advice section, that there are events transpiring outside the involvement of the PC’s, however it could be much stronger.

So, it is old school? Maybe. 🙂 There’s a definite Swords & Serpent-men feel, it’s open-ended to a very large degree, and it has a random courtier activity table with a halfway decent, though small, tunnels map. It also has skill checks, standard magic items, and not much for the PC’s to poke/play with, like pools/statues. Given the title it was bit too bland in the atmosphere department. It tries for Swords & Sorcery, but need more cowbell to actually get there. It’s certainly not bad, but will take a lot of work to get a good run out of it. It does have a pretty cool cover though. 🙂

3 Responses to Song of the Beast-Gods